Please ensure Javascript is enabled for purposes of website accessibility More and more restaurants list calories on their menus. What about salt? - American Daily Record Press "Enter" to skip to content

Home » More and more restaurants list calories on their menus. What about salt? 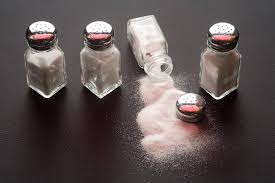 More and more restaurants list calories on their menus. What about salt?

Which do you think has more salt: a Panera Bread wild blueberry scone or a large order of Burger King french fries?

Starting May 5, restaurants and food stores across the U.S. were going to be required to include calorie counts on their menus. The Trump administration has delayed calorie labeling until next year, and is considering relaxing the requirements for certain food service establishments, a push that’s been led by the supermarket and pizza lobbies.

In the meantime, some businesses will likely start implementing the labels anyway. The push toward transparency in nutrition is popular – more than 60 percent of Americans across political parties are in favor of the policy. Even the National Restaurant Association, the country’s largest food service trade organization, supports it.

But calories don’t capture everything about your food – like the fact that the Panera scone has twice as much salt as the large fries.

Over the last decade, it has become increasingly common for restaurants to post calories on menus. New York City started the trend in 2008 by making this a requirement for chain restaurants, and several cities and states soon followed.

Some restaurant chains even started posting this information voluntarily nationwide. For example, Starbucks and McDonald’s label all of the food on their menus (revealing that, surprisingly, a Starbucks Venti Frappuccino has more calories than a McDonald’s Cheeseburger!).

As part of the Affordable Care Act (ACA), chain restaurants, supermarkets, movie theaters and similar food retailers with 20 or more locations will be required to include calories on menus. Places like Chipotle, AMC Theaters and even Whole Foods will need to post calories on nearly all foods that don’t have a nutrition facts label. Menus will also note that most Americans need to consume about 2,000 calories per day, so consumers have a point of reference. (So far, these rules are not affected by the push to reform the ACA.)

It’s not yet clear whether the initiative will push consumers to change their purchases. But there is some evidence that it may motivate restaurants to cut the calories in popular menu items. In recent years, restaurants have introduced new lower-calorie options, possibly in preparation for the labeling law.

Calorie labeling may seem like a win-win, supported by consumers and restaurants alike, but it has a downside. Because there’s now a federal rule about nutrition disclosures on restaurant menus, state and local governments can’t create a rule with different requirements. This means that cities can’t require chain restaurants to post other nutrients – like sodium – on their menus.

Sodium on the menu

Prior to the federal law, state and local governments had considered adding sodium to menu boards. They hoped consumers would use this information to choose lower sodium items and that restaurants would reformulate menu items to be lower in salt.

High sodium intake increases blood pressure, a major risk factor for heart disease and stroke. Though scientists disagree about optimal levels of sodium intake, there is widespread agreement that current levels of consumption among Americans are too high. In the U.S., the average adult consumes about 3,400 milligrams of sodium each day. That’s nearly 50 percent higher than the current recommended upper limit of 2,300 mg per day. Researchers estimate that a 40 percent reduction in sodium over 10 years could avert up to half a million deaths.

Very little of the sodium in your diet comes from the salt shakers on your kitchen table. More than 70 percent is from packaged and restaurant foods. Salt may be used to make foods more palatable or as a preservative to extend shelf life.

As a result, high-sodium foods often don’t even taste salty. For example, Panera’s blueberry scone contains 900 mg of sodium – nearly 40 percent of the daily upper limit. Other items can vary widely in sodium content. A tuna sandwich at Au Bon Pain has 560 mg of sodium, while Cosi’s has 1,099 mg.

In a 2015 survey across 26 states, most Americans reported taking action to reduce sodium in their diets. But if high-sodium foods don’t always taste salty, and similar items can have drastically different amounts of sodium, do consumers really have the information they need to make low-sodium choices?

We sought to answer this question by surveying adult and adolescent diners at six fast food restaurants in four New England cities.

We set up shop in restaurant parking lots and asked customers to estimate the recommended daily sodium intake, as well as to identify the amount of sodium in their meal purchase. We then calculated the actual sodium content of their meals by collecting each diner’s receipt and matching purchases to sodium information from restaurant websites.

In our study, the sodium content of fast food meals was very high. On average, adult and adolescent meals contained about half of the recommended daily sodium intake. More than 10 percent of meals contained more than an entire day’s worth of sodium.

Underestimation worsened as sodium content of the meal increased, meaning consumers who purchased the highest-sodium meals had the hardest time with estimates. Most diners also underestimated their daily sodium recommendation, indicating a general lack of awareness both about how much sodium to consume in a day and how much restaurant foods contribute.

The case for sodium labels

People likely underestimate the sodium in their meals because there is no visible, prominent information at point of purchase. All of the restaurants in our study provided sodium information in some way – on websites, napkins, cups or posters. This doesn’t appear to be an efficient means of communicating. Prior research has shown that fewer than 1 percent of consumers read nutrition information when provided in locations other than menus or menu boards.

Although federal laws prohibit cities and states from requiring sodium information on menu boards, there are policy options for addressing the underestimation problem. For example, New York City recently required chain restaurants to post sodium warning labels on menu boards next to items with more than 2,300 mg of sodium. The labels are considered food safety warnings, as compared to nutrition disclosures, which means they are not preempted by the federal law and are within the city’s authority to regulate. This policy provides information about sodium at point of purchase and encourages restaurants to reformulate their highest sodium items. Other cities and states could enact similar policies.