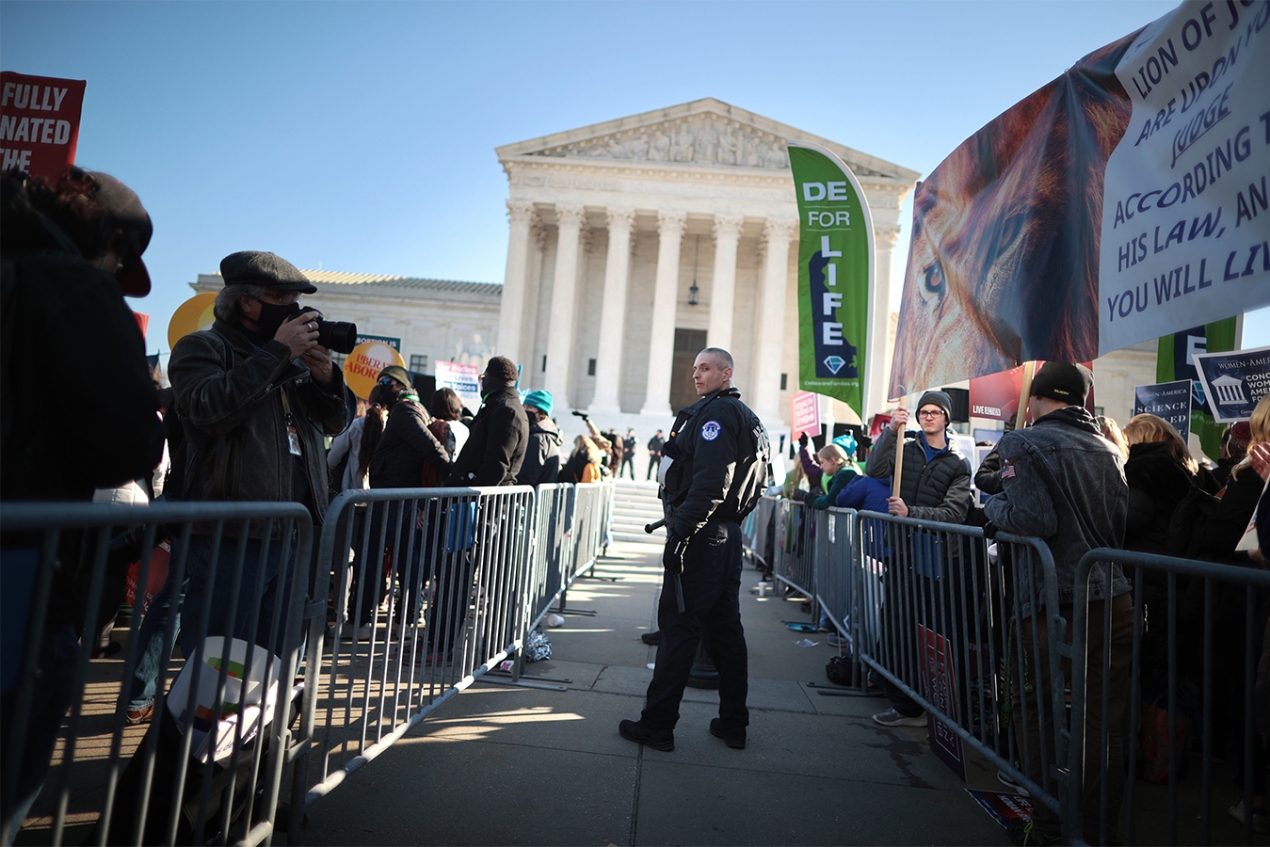 Republican lawmakers in a handful of conservative states have stumbled on a roadblock to what they thought would be a clear path to setting new restrictions on abortion if the Supreme Court upends the landmark Roe v. Wade decision: right-to-privacy protections enshrined in their own state constitutions.

In states where courts have ruled that their constitutions’ explicit privacy rights extend to the right of a woman to have an abortion, the procedure would continue to be legal even if the Supreme Court’s 1973 ruling is overturned, legal scholars and abortion-rights advocates said.

In Montana, the issue is playing out in the courts, where a state judge temporarily blocked three new anti-abortion laws. The state’s Republican attorney general appealed to the state Supreme Court, asking the justices to overturn a 23-year-old ruling that extended the state’s constitutional right to privacy to the right to have an abortion.

If that effort fails and if Roe v. Wade is overturned, conservative Montana could find itself a sanctuary for women seeking abortions from neighboring Wyoming, Idaho, North Dakota, and South Dakota, states where access is more tenuous, said an analyst for a research organization that supports abortion rights.

“If half the states ban abortion, you are talking about people, if they can, traveling vast distances to get that right to care,” said Elizabeth Nash, a policy analyst at the Guttmacher Institute. “And if access remains protected in Montana, then Montana will be a place where people seek that care.”

The ruling in the Mississippi case, legal experts speculate, could upend the Roe decision that guaranteed abortion rights around the country and allow individual states to set their own laws. In that scenario, the Guttmacher Institute predicts, abortion is certain or likely to be banned in 26 states.

Meanwhile, lawmakers and citizens in other states — including New Jersey, New York, and Colorado — are working to protect or expand abortion rights.

The original Roe v. Wade ruling was largely based on protecting the right to privacy under the due process clause of the 14th Amendment. But the words “right to privacy” aren’t actually written in the U.S. Constitution, a point frequently raised by abortion opponents.

Those words are, however, written into the constitutions of 11 states, adding an unexpected twist to sorting out a post-Roe legal landscape.

It’s not an issue for left-leaning states like California, which passed a 2002 law protecting abortion rights that cited its constitutional right to privacy for personal reproductive decisions. In that state, leaders are preparing for a potential rush of women from other states in search of medical care if the Supreme Court weakens or throws out its Roe decision.

But in conservative Alaska, abortion rights advocates say the constitutional right to privacy will protect a woman’s option there regardless of what the U.S. Supreme Court does. Voters will decide in November whether to call a constitutional convention, which abortion opponents see as an opportunity to amend the constitution to ban abortions.

In Florida, the state constitution says that “every natural person has the right to be let alone and free from governmental intrusion into the person’s private life.” In 1989, the Florida Supreme Court found that the provision protects the right to an abortion.

Louisiana’s state constitution protects its citizens against invasions of privacy, but voters passed a constitutional amendment in 2020, inserting that “nothing in this constitution shall be construed to secure or protect a right to abortion or require the funding of abortion.”

Montana’s constitution says, “The right of individual privacy is essential to the well-being of a free society and shall not be infringed without the showing of a compelling state interest.”

In 1999, the Montana Supreme Court ruled that includes the right of citizens to make their own medical decisions. “We held that this right protected a woman’s right to procreative autonomy and her ability to seek and obtain a lawful medical procedure, which abortions were and are, free from interference from the government,” retired Montana Supreme Court Justice James Nelson, who wrote the court’s unanimous opinion, said in a recent interview.

Caitlin Borgmann, the executive director of the Montana ACLU, succinctly described the importance of the ruling. “It is essentially Montana’s Roe v. Wade,” she said.

The Republican-controlled Montana Legislature, buoyed by the state’s first Republican governor in 16 years, passed a slate of anti-abortion bills last year. They included a ban on most abortions after 20 weeks of pregnancy, the requirement that providers give a woman the opportunity to view an ultrasound before an abortion, and constraints on the use of abortion pills, ​​including that an authorized abortion provider first examine and then give the woman the drug in person, an added obstacle in a rural state like Montana.

Planned Parenthood of Montana filed a lawsuit that said those bills violate the state’s constitutional right to privacy, along with rights to equal protection, safety, health and happiness, individual dignity, free speech, and due process. Billings Judge Michael Moses in October granted a preliminary injunction to block the laws from taking effect.

That ruling prompted one Republican lawmaker, Rep. Derek Skees, to call for throwing out “Montana’s socialist rag of a constitution,” according to the Flathead Beacon. “There’s no basis in our constitution to use the right to privacy to murder a baby,” he told the newspaper.

Attorney General Austin Knudsen has asked the Montana Supreme Court to overturn Moses’ injunction and nullify the 1999 ruling that linked privacy rights to medical decisions. Knudsen said the court’s seven members have a chance to correct what he called “unrestrained judicial activism,” according to legal filings.

“This is not some sort of political stunt,” Dewhirst said. “The case is wrongly decided.”

Martha Fuller, president and CEO of Planned Parenthood of Montana, said she believes Knudsen’s attempt to overturn the state court’s 1999 privacy ruling echoes the larger national debate over court precedents in abortion law. “The law is the law and not based on, ‘This judge said this, and this other judge said that,’” Fuller said. “That’s not where the integrity of our legal system comes from.”

If the state’s high court rules against Knudsen, abortion advocates anticipate that lawmakers will ask voters to alter the state’s constitution, either through an amendment or by initiating a constitutional convention, which would be Montana’s first in more than five decades.

Changing the state’s constitution, however, is purposefully difficult, said Anthony Johnstone, who teaches constitutional law at the University of Montana. Just to ask voters to consider an amendment or a convention requires 100 votes in the state’s 150-seat legislature.

“Montanans always have the last word in amending our constitution,” Johnstone said.