Home » Eric Adams will be NYC’s next mayor. Here’s what that means for schools 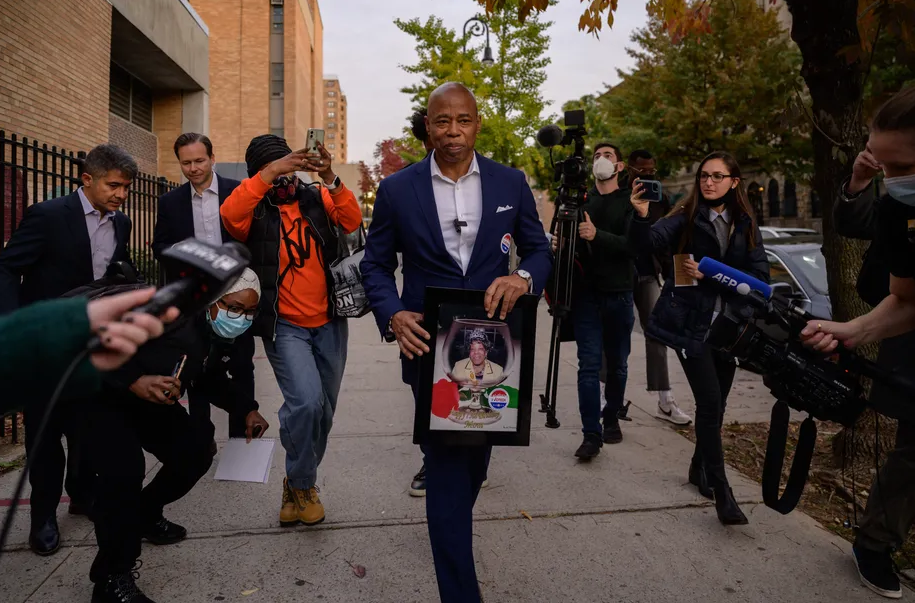 Eric Adams will be NYC’s next mayor. Here’s what that means for schools

Adams will take over amid a pandemic, when the city’s education department is still assessing the damage done by three disrupted school years. He could influence hotly contested policies on gifted programs, student vaccine mandates, and policing in schools.

Under mayoral control, Adams will have significant power over the nation’s largest school system. ​​But will Adams closely dictate school policy — as Mayor Bill de Blasio has tried to do — or delegate to his school chancellor? The charismatic Brooklyn borough president and former police officer will have a lot on his plate: bolstering safety, creating more affordable housing, and improving the city’s economy. (Though mayoral control is set to lapse in 2022, he would likely lobby the state to extend it.)

In terms of his priorities for education, Adams has often talked about expanding the notion of schooling from K-12 to “birth to profession,” or “cradle to career,” as he sometimes says. He’s a proponent of career and technical education, and as someone who faced schooling challenges because of a learning disability, he often talks about improving the system for children with learning differences, including ramping up dyslexia screening tools.

But overall, he has detailed few specifics in his education platform on the campaign trail.

That could indicate he might be more willing to follow the education department’s lead than de Blasio, whose heavy-handedness with school decisions during the pandemic contributed to an exodus of high-level education department employees last school year, according to insiders.

Many political observers have speculated that Adams will tap his trusted advisor David Banks as the next chancellor. Banks is the founding principal of the Eagle Academy for Young Men, the first school in a network of all-boys public schools in New York City and New Jersey. Banks is also a mentor of current Chancellor Meisha Porter, who could end up remaining in her role.

Here is where Adams stands on some schools issues:

As children ages 5 to 11 are eligible for the COVID vaccine, questions are swirling around whether New York City will mandate vaccination for students.

Adams has said he supports a vaccine mandate for students, unlike de Blasio, who expressed concerns that a mandate would dissuade some children from attending school.

Adams also has said he was “open” to a remote option for families of children who are not vaccinated.

New York City’s gifted and talented program, serving about 2,500 kindergarten students a year, is getting overhauled. The program’s entry ticket has long been based on a single test for 4-year-olds that is often seen as creating a barrier for Black and Latino students to score seats — much like the city’s specialized high schools.

De Blasio recently said he planned to transform the gifted and talented program by getting rid of the controversial test, implementing “accelerated learning” for all students from kindergarten to second grade, and then screening all incoming third graders for subject-specific accelerated coursework.

Adams has said he supports expanding the program in some way to increase opportunities. But he has also said he would rethink the admissions test.

“I don’t believe a 4-year-old taking the exam should determine the rest of their school experience,” he said at a recent debate. “That is unacceptable.”

When it comes to the exam for the city’s specialized high schools, Adams has said he would not remove it. He said the state must determine the fate of the SHSAT, which is mandated by state law.

Adams supports a longer school day or school year, and he has voiced support for schools to be open year-round with services for students and families. He has called himself a “big believer” in opening up school buildings beyond the regular day, pointing to a $2 million pilot program he supported to provide community organizations space in school buildings. He said he would expand that program, which will allow nonprofits to provide after-school opportunities like sports, especially in underserved areas.

“Because when you really think about the cost, rental of space, use of a space — that is really some of the largest parts of actually having an overhead,” he previously told Chalkbeat.

As school districts across the nation are rethinking their approach to police in schools, New York City has lagged behind. De Blasio promised to transfer oversight of school safety agents from the NYPD to the education department by June — when he will no longer be in office.

Adams, however, said he prefers to keep school safety agents under police control.

“We must have school safety agents that are trained, paid well and great at conflict resolution,” Adams said at a recent WPIX11 mayoral forum.

He also said he wants students to have a voice in the overall safety plan of their schools and would create a “public safety stakeholder committee” of parents, students and educators to get input on things like metal detectors.

The charter school sector now serves about 13% of the city’s public school students. While charter schools have not been a central component of Adams’ education plan, he has indicated on multiple occasions that he supports them.

And while he has indicated that he favors keeping the cap on charters, he has also said that successful charters should be duplicated while failing ones shut down.

Plans for the most vulnerable students

For students with disabilities, Adams said he would prioritize real-time tracking to measure which students are not receiving all of their services so that those situations could be addressed promptly. He supports universal dyslexia screening, and he said he would hire more bilingual special education teachers to address chronic shortages in reaching English language learners who have disabilities.

For children in foster care, who are among the system’s most vulnerable, Adams said he would develop a mentorship program while also investing in employment programs for older students.

This article was originally posted on Eric Adams will be NYC’s next mayor. Here’s what that means for schools