Please ensure Javascript is enabled for purposes of website accessibility Warning: U.S. might be subjected to ‘petticoat rule’ – a celebration of women’s right to vote - American Daily Record Press "Enter" to skip to content

Home » Warning: U.S. might be subjected to ‘petticoat rule’ – a celebration of women’s right to vote 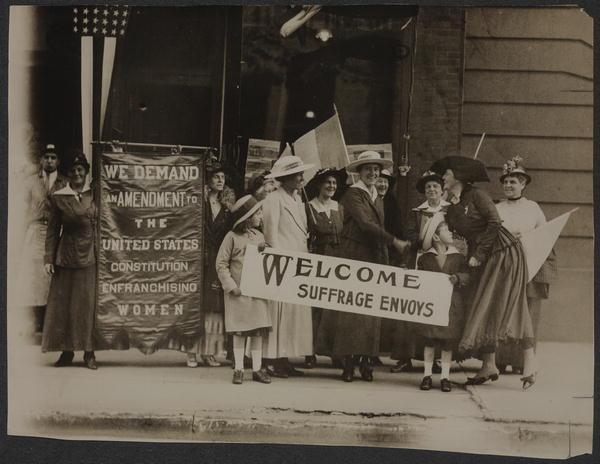 Warning: U.S. might be subjected to ‘petticoat rule’ – a celebration of women’s right to vote

The city of Albuquerque’s 100th Anniversary of Women’s Suffrage special on Wednesday was both a celebration of the 19th amendment and a reminder of the darker moments behind voting rights.

A bevy of women speakers, from political leaders like Gov. Michelle Lujan Grisham to young women pledging to vote for the first time this year, talked about the importance of voting and frequently referred to it as a way to make their voices heard. Many also spoke about the struggle for women of color to gain the right to vote even after the passage of the 19th amendment.

Social justice advocate Pamelya Herndon, executive director and founder of KWH Social Justice Law Center and Change, brought up the education requirements that some Black voters faced for a century in some states after the Civil War ended as just one impediment.

Herndon said the historical social justice leader and “leading male feminist of his time,” W.E.B. Du Bois said that “in order for the Black race to be lifted, every single Black person must have the right to vote.”

The women’s suffrage movement distanced itself from the concept of Black women having the right to vote in the early years of the effort because the suffragettes didn’t want to alienate the white Southern women involved in the cause, according to historians.

Torres Small, whose grandmother migrated to the U.S., said she is the “first woman and person of color to serve New Mexico’s Second Congressional District.”

Haaland, a member of the Laguna Pueblo, was one of the first Native American women to be elected to Congress, said that despite the ratification of the 19th amendment on August 18, 1920, not all women were granted the right to vote.

Native Americans gained citizenship in 1924 but didn’t have the right to vote until 1962.

And even after 100 years of the passage of the 19th amendment, “we’re still in the battle for access to voting,” she said.

New Mexico Secretary of State Maggie Toulouse Oliver, the top elections official in the state, spoke of the Voting Rights Act of 1965, which ended many discriminatory practices designed to keep people of color, particularly Black people, from voting with both poll taxes and literacy tests in some states.

Toulouse Oliver called the right to vote “sacred,” and said that some challenges voters face today include the need to drive long distances to get to some voting booths, having to leave work to vote and, in 2020, the concerns of staying healthy while voting in person during a pandemic.

President Donald Trump has repeatedly criticized mailing in ballots, lied about potential voting fraud and his administration has tried to close post offices.

Native American activist Sonlatsa Jim-Martin, of Navajo and Modoc tribes, said that many of the concepts of the U.S. Constitution and the concept of a United States both came from the Iroquois Confederacy. She called that a “lost history.”

Lujan Grisham noted that after the 19th amendment, it still took another 45 years before all women of color and Indigenous people, with the passage of the Voting Rights Act of 1965, were granted the right to vote without discrimination.

“We stand today on the shoulders of giants,” she said, referring to the many women, from Sojourner Truth to Ida B. Wells, who fought for all women to have the right to vote.

Hosted by former Albuquerque Poet Laureate Jessica Helen Lopez, the event was sponsored by a variety of nonprofit organizations and, in addition to speeches, there were musicians and poets who sang or performed or recited poetry. Lopez introduced testimonials from 18-year old women from different counties around New Mexico who all pledged to vote this fall.

During the virtual event broadcast on Albuquerque’s station GOTV, New Mexico Supreme Court Justice Judith Nakamara held up a historic pamphlet from a century ago that warned that if women had the right to vote, the U.S. might be subjected to “petticoat rule.”

When women vote, they have the power to “mold the issues,” she said.

The article was published at Warning: U.S. might be subjected to ‘petticoat rule’ – a celebration of women’s right to vote