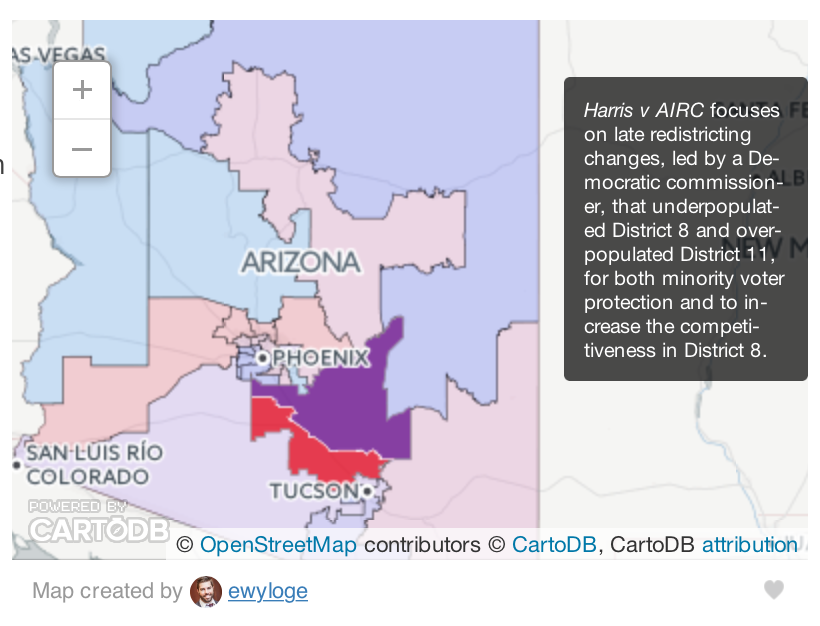 The lawsuit is based on the fact that the state’s Republican-leaning legislative districts are overpopulated, while Democratic-leaning and minority-heavy districts are underpopulated.

The court could rule that the current maps violate the one person, one vote equal protection clause of The U.S. Constitution. The appellants want the commission to redraw the maps, which would tilt the state legislature further in favor of Republicans. The Arizona House of Representatives has 36 Republicans and 24 Democrats, and the Senate is composed of 18 Republicans and 12 Democrats.

Such a ruling could immediately open the door for similar litigation in more than a dozen other states where state legislative district populations are not exactly equal.

Congressional and legislative redistricting typically takes place every ten years, coinciding with the decennial census, to account for population shifts between and inside states. States with growing populations gain congressional seats and those with dwindling populations lose them. Legislative districts are similarly redrawn.

This is the second Arizona redistricting lawsuit to go before the Supreme Court this year, both led by Republicans. The first, which was unsuccessful, challenged the constitutionality of taking redistricting powers away from state legislatures and giving them to independent commissions, such as the one in Arizona and 12 other states.

A group of 10 Republican voters who live in Arizona’s “packed” districts filed the current suit, and said the disparity deprives them of their constitutional right to equal representation. They claim the disparity was intentional and motivated by a desire to elect more Democrats to the state legislature.

Attorneys representing the redistricting commission argue that the population disparities were necessary to satisfy The Voting Rights Act’s requirement to provide special protection to minority voters, and that the underpopulated, minority-heavy districts only statistically correlate with Democratic partisanship.

A panel of three federal judges heard the case in 2013 and ruled 2-1 in favor of the redistricting commission.

The plaintiffs have focused on a specific area in southern Arizona, where late changes to Legislative District 8 were led by Linda McNulty, one of two Democratic commissioners. She said at the time that the changes helped increase minority voting strength, and also increased “competitiveness.”

Competitiveness, where practicable, is listed in the commission’s constitutional goals. But Republican commissioners said at the time that the result of the changes was to “hyperpack” Republican voters into a nearby district, diluting their voting strength and giving an unwarranted boost to Democratic voters in District 8.

In their opinion, the three-judge panel found that “partisanship clearly played some role” in the changes made to District 8, but that the commission also had legitimate reasons for the changes. The commission was required to get Voting Rights Act “preclearance” from the U.S. Department of Justice by showing an attempt to protect minority voting strength.

The preclearance requirement applied to 9 states, 56 other counties and two other cities that had a demonstrated history of voter discrimination. Any changes to election laws coming from those jurisdictions, including redistricting plans, required the preclearance review of the Justice Department before the changes could be put in place.

The Voting Rights Act has, however, been weakened since the U.S. Supreme Court ruled in 2013 that the part of the law that determines which states have to get preclearance from the Justice Department was unconstitutional.

Michael McDonald, associate political science professor at the University of Florida and Governance Studies fellow at the Brookings Institution, said it’s unlikely that the Supreme Court would use the 2013 decision on the preclearance formula to force the redistricting commission to redraw the maps.

“It’s like if someone committed a crime only after it was a crime,” McDonald said. “You can’t go back and throw that person in jail.”

Rather, in a legal setting where preclearance will no longer be used, McDonald said the court may see this as an opportunity to draw a clear line between what’s permissible and what’s not when it comes to the partisan ramifications of underpopulation and overpopulation.

“When there’s a fuzzy line, the court likes to draw bright lines,” he said.

McDonald said if the court rules against the current maps, it would likely benefit Republicans across the country. Underpopulated, minority-heavy districts tend to be more Democratic, because of the same need for Voting Rights Act compliance that influenced Arizona’s map.

A brief by the U.S. Solicitor General supporting the commission explained that if the court rules against the current map 16 state legislative district maps could face immediate challenges.