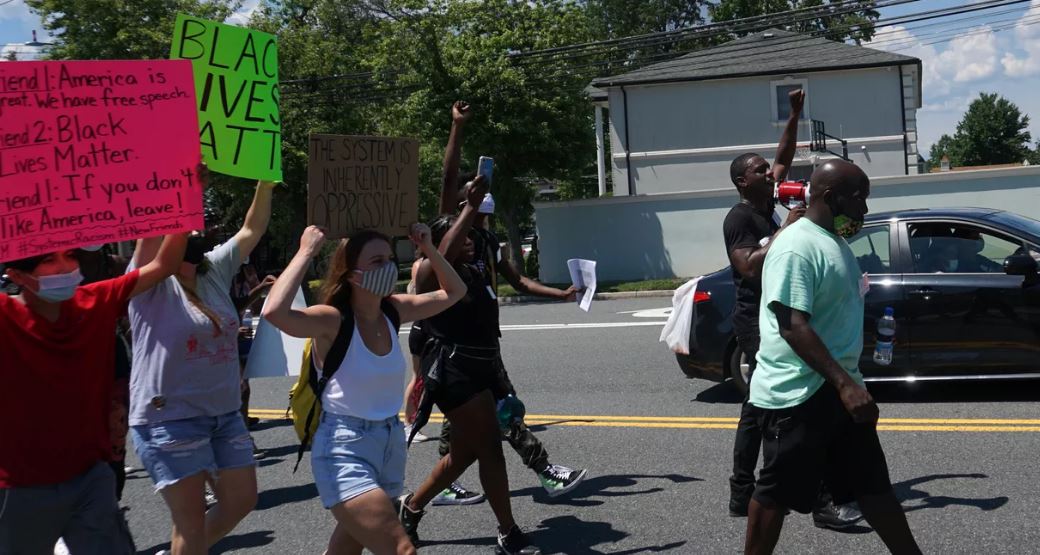 Their Anti-Racism Marches Were Twisted in a $4 Million GOP Attack Ad Campaign. Now, They Just Want to Get Out the Vote

Meet the Young Leaders of Staten Island, a group that got embroiled in the Malliotakis-Rose House battle and is now forging a role in the 2021 municipal elections.

Shortly after the Rev. Al Sharpton left a May anti-racism march on Staten Island, several frustrated young Black demonstrators joined together to block traffic at the site of Eric Garner’s 2014 death at the hands of police.

Some of those involved didn’t know each other then. But they bonded that day to form the Young Leaders of Staten Island –– and soon began organizing marches throughout the summer that drew thousands to protest police brutality.

The group quickly got a lesson in politics: Footage of one peaceful march — interspersed with doctored images of police cars ablaze — became the centerpiece of an attack ad touting Assemblymember Nicole Malliotakis and trashing Rep. Max Rose in her successful bid to oust the freshman Democrat from the Staten Island’s House seat.

Now, the Young Leaders of Staten Island are determined to play a key political role — on their own terms.

Their aim: to increase voter participation among the North Shore’s Black and brown residents to rival that of the borough’s mostly white South Shore, which reliably votes Republican — and went for Malliotakis and President Donald Trump Nov. 3.

“Our goal right now is to create a different culture around voting,” said Michael Animodi, a founding member of the Young Leaders. “The South Shore always comes out and votes, whether it’s local elections or main elections. Their numbers prove that.”

The Young Leaders launched a GoFundMe, applied for a social justice grant to fortify their grassroots efforts and registered around 100 residents through “burger and ballots” events in borough neighborhoods, including Mariners Harbor and Park Hill.

Now the group wants to host candidate forums as the city prepares for elections next year to usher in a new mayor, comptroller, borough presidents and almost an entirely fresh City Council.

“After we did our marches, we wanted to get down to legislation and getting the power into the people’s hands — meaning they have to vote,” said Xavier Charles, 21, a founding member. “We chose those specific locations because white people vote all the time. I can’t tell you how many people have told me they don’t believe in voting.”

While 48,000 absentee ballots have yet to be fully counted — the majority cast by Democrats — election-night results support what Charles and his fellow Leaders suspect.

In the borough’s southernmost Assembly district, 55.72% of adult residents voted in-person through Election Day, compared to 44.58% in the northernmost district.

“In the North Shore, they believe the voting system doesn’t work, they believe it’s not for them,” said Animodi. “So our job, it’s a tough one. We really have to change the minds and hearts of a lot of people in this community.”

The group traces its roots to the Bay Street storefront where Garner died on July 19, 2014, after then-Officer Daniel Pantaleo used a banned chokehold while trying to subdue him during an arrest for allegedly peddling untaxed cigarettes.

When Sharpton left the May demonstration, organized in the wake of the killing of George Floyd at the hands of Minneapolis cops, some demonstrators decided to continue on after the march to the 120th Precinct.

They returned to the street where Garner died and launched an impromptu sit-in, blocking buses and cars on Bay Street.

“I have a 2-year-old daughter and she has to grow up on this racist island,” said Shea Clarke, a founding member of the Young Leaders. “I was very mad that day, we said, ‘This is Staten Island, this is our home, so we’re going to protest here.’ We went to 202 Bay St. and we just sat.”

They then marched to the foot of the Verrazzano-Narrows Bridge, where they had a tense standoff with NYPD officers, including Staten Island Borough Commander Asst. Chief Kenneth Corey, and state troopers. They spoke to the officers about past instances of police brutality.

Ranti Ogunleye, director of a nonprofit and now a Democratic candidate for City Council in the North Shore, served as an early mentor to the group. After the standoff, he offered up his home to allow the group to plan their next steps.

Less than a week later, Rose unexpectedly showed up at the front of a march the Young Leaders helped organize. One of the group’s founding members, Isaiah Buffong, asked Rose to move further back into the crowd to allow the group to lead, as City Limits recently recounted.

Rose complied. His participation was quickly capitalized on by Malliotakis, who criticized her rival repeatedly for not walking away amid anti-police chants.

One Republican political action committee, the Congressional Leadership Fund, poured in at least $4 million into televising ads focused on Rose attending the march.

One of the spots showed some of the Young Leaders of Staten Island and footage of their June 3 march in New Dorp, spliced with violent scenes, while a narrator spoke of “criminals hailed as freedom fighters.”

“He marched there with cop-haters,” the narrator said, referring to Rose.

Another ad showed retired cops discussing Rose’s presence in the march. “He promised us that he was going to support the police,” one of the former cops said. “And then he marched with people to defund the police?”

“This attack ad tried to ostracize the Young Leaders and the community by mischaracterizing our efforts to fight for justice as something you should be afraid of,” he said.

‘The World is Crazy’

Some Staten Island activists have taken notice of the group’s quick rise and marveled at how they’ve been able to galvanize local support, largely through their following on Instagram.

They’ve garnered backers from more established local leaders, many of whom praised their peaceful protests in the conservative South Shore.

One was an anti-racism march and another honored New York’s oldest free Black settlement in Rossville. Several organizers told THE CITY that they’ve never seen marches at that scale attempted in the southern part of the borough.

Leaders with Staten Island Women Who March (SIWWM) and La Colmena, an employment advocacy group for domestic workers and day laborers, said that the Young Leaders are eager to collaborate. Members of the Young Leaders often work with La Colmena Youth.

“SIWWM was very supportive but we were taking what we call an ally role,” said Roxanne Mustafa, a cofounder of SIWWM. “We used our platforms on Instagram and Facebook to amplify their message. This was an uprising that was happening that we wanted to make sure it stayed in their truest form.”

Rose, who conceded Nov. 12, joined the chorus of supporters when he defended the Young Leaders in part of his speech, hours after polls closed on Election Day.

“Young Staten Islanders marched to express their pain. And for that, they were called rioters and thugs on national television,” said Rose. “They were demonized for their faith in America’s capacity for change. Their belief that peaceful protest is how you do it, and their hope that their hometown could be a part of that movement.”

Contrary to the attack ads, the group doesn’t support defunding the police.

Instead, when they met with Corey shortly after forming they advocated for cops to communicate more directly with residents in their neighborhoods and for the NYPD to be more transparent about discipline of officers accused of misconduct.

“We still need police because the world is crazy,” said Charles.

THE CITY is an independent, nonprofit news outlet dedicated to hard-hitting reporting that serves the people of New York.

This Article was initially published at TheCity