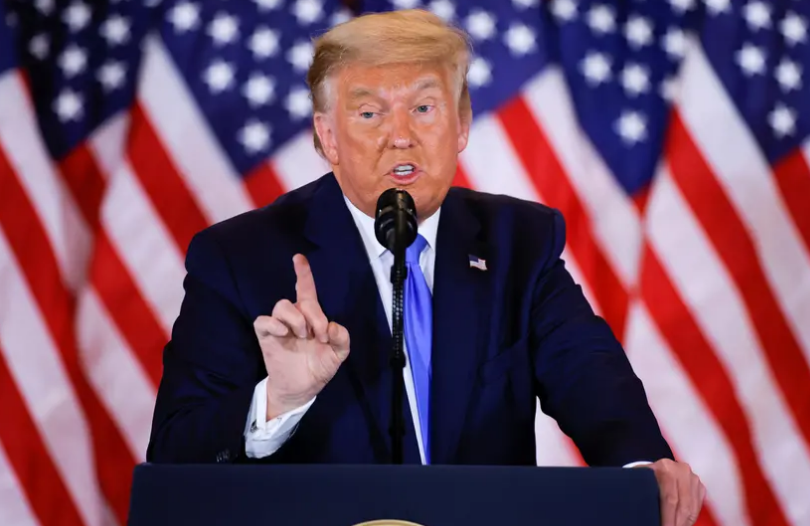 “Texas Republicans decline to condemn President Trump’s premature declaration of victory while votes are still being counted” was first published by The Texas Tribune, a nonprofit, nonpartisan media organization that informs Texans — and engages with them — about public policy, politics, government and statewide issues.

Trump also pledged to go to the U.S. Supreme Court to stop votes from being counted. His statements early Wednesday morning followed a tweet he sent repeating a false claim that Democrats are stealing the election.

Gov. Greg Abbott and Lt. Gov. Dan Patrick also did not respond to requests for comment.

In a phone call with reporters on Wednesday afternoon, U.S. Rep. Kevin Brady, R-Conroe, said he had not heard the president’s comments because he was in bed by then.

“Certainly, I’m confident that if every vote casted legally is accurately counted President Trump will be reelected,” Brady said. “There is an awful lot of mail-in voting yet to be done in key states so I’m hopeful and confident that he will be taking office again in January.”

Another Republican congressman doubled down on his support of the president on Twitter, while thanking voters for reelecting him.

“My trust is w/ @realDonaldTrump & his legal team to leave no stone unturned. I trust in God, but I don’t trust Dems,” wrote Congressman Brian Babin, R-Woodville, on Twitter Wednesday morning.

“All votes legally cast should count, but there are legitimate concerns regarding the potential for fraud that must be addressed in order for the country to move forward,” he said in a statement.

There has been no evidence of widespread voter fraud across the country in the 2020 election.

“Tyrants hear only their own voice. Democracies rely on the voices of the people, even when those voices are narrowly divided,” said U.S. Rep. Lloyd Doggett in a statement. “Trump is not fighting for more votes; he is desperately fighting to obstruct our democracy.”

U.S. Rep. Henry Cuellar, a Laredo Democrat who served as secretary of state in Texas for eight months in 2001, said there are checks and balances in place to ensure each vote is counted accurately, as well as poll watchers and attorneys from each campaign.

“You have men and women who are professionals who have been doing this for years,” U.S. Rep. Cuellar said to The Texas Tribune. “Let the secretaries of states and local officials, with their checks and balances and different campaign poll watchers, do the counting.”

Other Democratic representatives echoed the sentiment.

“President Trump’s premature declaration of victory was reckless and undermines the integrity of our electoral process,” said U.S. Rep. Vicente Gonzalez, D-McAllen, in a statement. “Every eligible vote must be counted for the American people’s voices to be heard.”

“They lack that level of leadership and they need to tell the president to knock it off,” Rep. Veasey said. “The fact [that] they won’t just tells you what a state of disarray their party is [in],” he said.

On the press call, Brady defended fellow Republicans saying he didn’t know of any who didn’t want every legal vote counted.

At least one Republican in the president’s inner circle criticized Trump declaring victory before all votes had been counted.

Former New Jersey Gov. Chris Christie, who is a Trump ally, said all outstanding votes must be counted.

“All these votes have to be counted that are in now. … Tonight was not the time to make this argument,” he said on ABC News. “I disagree with what he did tonight.”

In the weeks preceding the election, Trump and other White House officials repeatedly made unsubstantiated claims about voter fraud in mail-in ballots even though there is no evidence widespread fraud exists. He also has said votes should not be counted after Election Day, which is common practice.