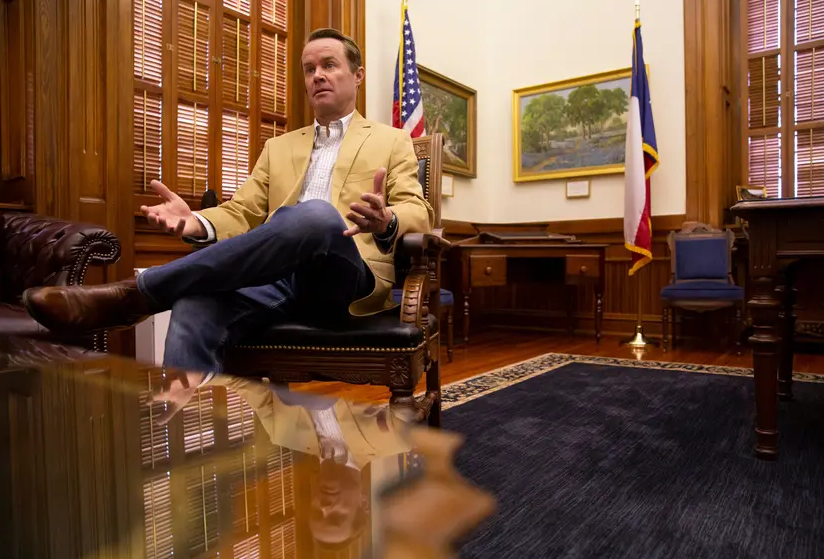 Texas House Speaker Dade Phelan, R-Beaumont, said Tuesday that there were “absolutely no deals made” to lure Democrats back to the Capitol and end their weekslong quorum break, while emphasizing that he sought to handle the standoff without inflicting permanent harm on the chamber.

That could have happened if the impasse got to the point of members being physically detained and brought to the Capitol, Phelan said in an interview Tuesday morning with the The Texas Tribune. The interview came hours after the chamber decisively restored a quorum, with 113 members present — the most since more than 50 Democrats broke quorum in July in protest of the GOP’s priority elections bill.

Phelan was insistent that he let bill authors “run their own legislation,” and he said neither he nor his lieutenants appealed to Democrats with any promises involving committee leadership or redistricting.

Instead, Phelan said, there was “no insider baseball” and Democrats “showed up on their own volition,” repeating that his message was they could return to the Capitol and “debate policy.” Phelan added that he did not know “who was gonna show up on any given day” and simply exercised patience, likening the approach to the one his predecessor took toward Democrats’ 2003 quorum break over redistricting.

“You can try to push too hard on 149 type-A members of the House and get an outcome that’s decidedly worse, but sometimes it just takes time,” Phelan said.

The 113 members who showed up Monday included over a dozen returning Democrats who appeared on the floor after a quorum had already been established, signaling a more certain end to the impasse that appeared to end when the chamber last met Thursday.

Navigating the quorum break, Phelan said he was especially mindful of not doing “un-repairable harm” to the chamber, indicating that could have happened if members were physically detained and brought to the chamber. While the House authorized such arrests and Phelan signed 52 warrants, the roundup never got beyond the sergeant-at-arms and law enforcement visiting members’ homes and delivering the warrants.

​​“The big question is, what do you do with somebody once you detain them?” Phelan asked. “Once you bring them back to the House, what do you do with that individual? And that’s something that no one’s answered to date. So there was a balance there of how you compel attendance, and we never got there [to physically detaining members].”

“I think many members saw that if we were gonna go there,” Phelan added, “they were gonna be the ones maybe possibly causing this harm to the House, and that’s why I think you saw a lot of members show up.”

Phelan said another complicating factor for the arrests was a legal battle over temporary protection from district courts that many of the quorum-breaking Democrats had received. That raised the possibility that the sergeant-at-arms could have been put “in contempt of court had he physically detained somebody,” Phelan said.

Phelan also expressed optimism that the House can pass legislation tied to Gov. Greg Abbott’s 17-item agenda with less than two weeks left of the special session, saying he felt confident the chamber would pass items such as the elections legislation “in the coming week or so.” The speaker also pointed to House rules that allow for an expedited timeline during special sessions.

The elections proposal, advanced Monday night by a House committee, has been dubbed by Republicans as an election integrity measure to protect the voting process from fraud, even though there is no evidence it occurs on a widespread basis. Democrats and voting rights activists say the legislation would undermine voting access for marginalized groups. The bill would bolster access for partisan poll watchers and further tighten the voting-by-mail process, among other changes to the state elections.

The elections legislation first died in the final hours of the regular session that ended in May after Democrats orchestrated a walkout from the chamber. It was again defeated in the first special session called in July when Democrats abandoned the Texas Capitol to camp out in Washington, D.C., for several weeks. The Legislature is in its second special session to pass the elections bill and other GOP priorities.

Asked if the House should change its rules to punish Democrats who remained absent from the chamber — a sentiment that some Republicans have pushed amid the quorum break — Phelan deferred to the members, saying it was only his job to enforce the rules.

Phelan did say he had two requests should members change the chamber’s rules: Ensure it’s a member-driven process and avoid placing more power into the speaker’s office.

“Be careful what you ask for because I know in the past, members have been very reluctant to give the power of removing positions of leadership on a whim to the speaker,” he said. “You can imagine what that means in the committee process — ‘hear this bill or I’m removing you tomorrow’ type of stuff. … I would be very hesitant to give that type of arbitrary power.”

Phelan said the state’s “Big Three” — the speaker, Abbott and Lt. Gov. Dan Patrick, who heads the Senate — “have a good working relationship” and that the past few months have helped people better understand how the House operates differently than the Senate.

“We don’t always agree,” Phelan said, “but we do have a healthy relationship.”

While the quorum break posed the toughest test for Phelan as speaker yet, he said it did not change his mind about seeking another term behind the gavel.

“It may change my wife’s mind, but not my mind,” he said with a laugh. “It’s been a challenge, but it has been well worth it. I absolutely expect to be sitting here in 2023.”