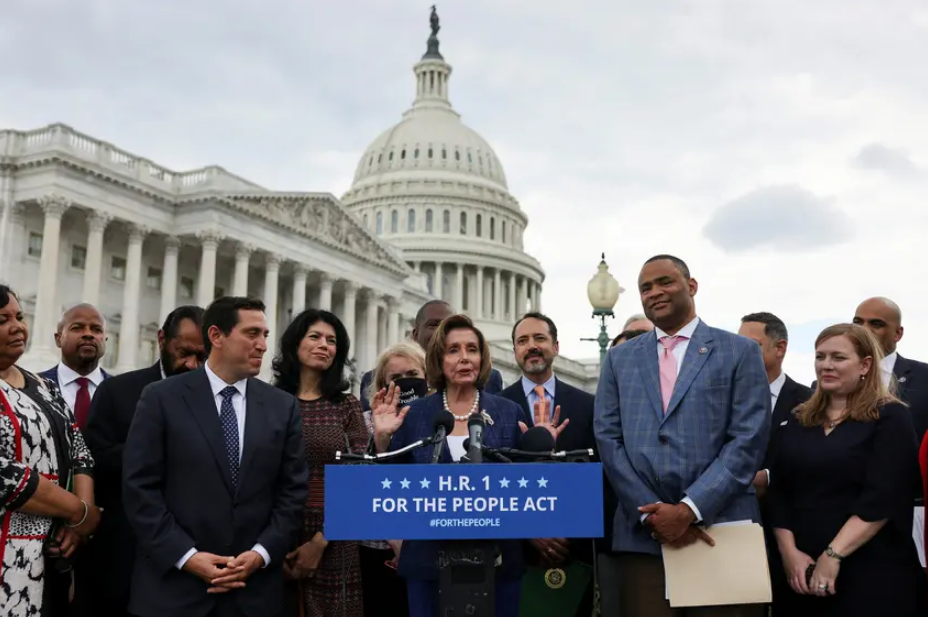 Out of power and outnumbered, Democrats in the Texas Legislature are limited in how they can fight new voting restrictions in their state.

So in the aftermath of their dramatic walkout of the state Capitol to break quorum and temporarily doom a GOP priority voting bill, the minority party in the state is pushing its uphill battle this week on the national political stage. Despite facing tough odds in Congress, their hope is that their newfound spotlight will help spur a federal response to restore expansive protections for voters of color and aid their struggle.

Two weeks after their gambit in Austin, a group of about 20 Texas Democrats made their case in a series of meetings on Capitol Hill Tuesday with congressional leaders and the staff of a key swing vote in the Senate. On Wednesday, they’ll convene with Vice President Kamala Harris at the White House. Their visit to Washington, D.C., comes amid a stall on far-reaching federal legislation to reinstate oversight of elections in states with troubling records — and push Texas in the opposite direction of the failed Senate Bill 7.

“When we made the plan to break quorum that day, our dream was that this would happen,” said state Rep. Gina Hinojosa, an Austin Democrat. “We knew that we would kill the bill for the moment, but we knew the governor would call us back to pass some kind of voter suppression bill. Our moonshot was to appeal to Washington for help in passing federal voting rights legislation to help protect Texans.”

Though it represented a mostly temporary victory, the walkout has given them an opening to attempt to anchor the federal fight over voting rights in a state with a long history of intentional discrimination against voters of color at the hands of state lawmakers.

While making the rounds Tuesday on Capitol Hill, the message they brought to Congress was twofold. Their first argument was that Texas is a clear exhibit for the need for the two main federal voting bills.The second was that the extraordinary legislative measure they took to block the legislation — just the fourth quorum break in modern Texas history — was no easy feat, but if they could go to those lengths, so could Congress.

“[We want] to emphasize that what we did was not easy. It’s really hard to get 51 politicians, elected officials running in the same direction,” Hinojosa said. “We figured out how to do this as a minority party — how to protect voting rights. Certainly, Washington [and] the Senate Democrats can figure this out, too.”

SB 7 would have brought sweeping changes to Texas elections. It restricted voting hours, narrowed the latitude local officials have to run elections, tightened the rules for voting by mail and bolstered access for partisan poll watchers, among several more changes to elections. Though Democrats prevented a vote on the legislation before a fatal deadline, Republicans are determined to pass it in a soon-to-be-called special legislative session.

The fight over Republicans’ latest bid to restrict voting in Texas has played out as the GOP’s political dominance of the state has waned a bit in recent years. As Texas’ electorate grows increasingly diverse, members of both parties have wondered if it will eventually go the way of two other diverse, formerly reliably red states, Georgia and Arizona, which voted for Democrats in the presidential and Senate races last year.

Backed by civil rights groups who repeatedly warned that the bill possibly violated federal protections for voters of color, Democrats have rooted their opposition in concerns that the Texas legislation will make it harder to vote for groups long marginalized in the state and who are the most likely to be shut out when voting procedures are further tightened. Republicans, who have vowed to pass the legislation this summer, have countered that the bill was drawn up as race-neutral measure meant to safeguard elections from fraudulent votes, even though there is virtually no evidence of widespread fraud.

The two pieces of federal legislation the Texas Democrats are advocating for in their trip — the sweeping For the People Act and the more narrowly tailored John Lewis Voting Rights Advancement Act — would preempt significant portions of the Texas legislation that nearly became law. But they face a challenging path in the U.S. Senate.

There are 50 senators from each party, and the vice president serves as a tie-breaker in her capacity as president of the Senate. But while Senate bills only need a simple majority to pass, action on the legislation has been held back by a legislative maneuver called the filibuster, which sets up a 60-vote threshold to bring legislation to the floor in the chamber.

It is highly unlikely Democrats would find 10 additional Republican senators to support a voting bill. And two Democratic senators — U.S. Sens. Joe Manchin of West Virginia and Kyrsten Sinema of Arizona — have refused to do away with the filibuster. Further dooming its chances, Manchin has indicated he is opposed to the For the People Act, remaining unmoved on it after a meeting with civil rights leaders last week. He does support the more narrow legislation, which would bring back federal oversight of elections, but that bill would also run into the Senate’s filibuster rule.

Texas Sens. John Cornyn and Ted Cruz have both been steadfast in their opposition to the bills. Both Republicans have derided the measure as a power grab that would pull back on local Republican-backed election laws, including the state’s photo ID requirement for voters.

“This legislation strikes down virtually every voter integrity law adopted at the state level,” Cruz said at a Senate committee meeting last month.

While on Capitol Hill, Texas Democrats didn’t get their own turn at appealing directly to the Manchin or Sinema. Neither were in attendance during the Senate Democratic Caucus’ weekly luncheon where Texas lawmakers discussed their walkout and the chaotic process leading up to it, including a series of last-minute changes Republicans made to the legislation behind closed doors.

Unable to get on his calendar, state Reps. Trey Martinez Fischer of San Antonio and Jasmine Crockett of Dallas conferred with Manchin’s staff for about 45 minutes in what they described as a “productive” meeting during which they discussed how voting experiences in Texas differ from the senator’s home state of West Virginia and telegraphed the stakes of congressional inaction.

“It’s one thing to say, ‘Hey, we’re in Texas. Come help us.’ It’s another thing for us to then walk out. It’s a whole other thing for us to fly here and tell you we need cover,” Crockett said after the meeting. “This is that important because otherwise we don’t know what’s going to happen in our country, and I think they hear us. And I think they hear us on a different level than maybe they would’ve heard us if we had just sat there and maybe voted against that bill.”

The For the People Act, formally known as H.R. 1, would significantly overhaul elections in Texas, bringing automatic and same-day voter registration to a state where voters are still required to submit paper applications to register. It would nullify the state’s tight eligibility requirements for voting by mail. And it would bring to Texas an independent redistricting commission that would take control of the state’s congressional map.

The second piece of federal legislation, known as H.R. 4, could restore federal oversight of Texas elections through a process known as preclearance, which was brought down by a U.S. Supreme Court ruling in 2013, that kept laws from being enacted before the government could ensure they wouldn’t harm voters of color. It would also enact nationwide checks on election changes like reductions in the number of polling places or changes to Sunday early voting hours, like those included in the failed version of SB 7, before they were adopted.

Decade after decade, federal courts found Texas lawmakers intentionally discriminated against voters of color in their political mapmaking and in new elections laws by working to dilute the power of their votes. Preclearance kept the state’s original 2011 maps from going into effect before they were revised by the federal courts to protect voters of color. It also kept Texas from immediately implementing its stringent voter ID law when it was passed in 2011. The law was eventually slightly eased as a result of the legal intervention over the way it discriminated against Hispanic and Black voters who were less likely to have the one of the IDs needed to cast a ballot.

Joining the Democrats outside the Capitol building on Tuesday afternoon, Pelosi responded to their pitch by offering the federal legislation under consideration as the “correction” to the restrictions that make up SB 7.

“This is an all out assault,” Pelosi said of SB 7. “It’s just really hard to understand how they could cook up so many various ways to come at a person’s right to vote, but they did.”

This week, the Democrats also began working to gather signatures from state legislators across the country for a letter calling on Congress to pass comprehensive federal reform to protect voting rights.

“We’re the boots on the ground. The basis of most of this intentional discrimination is typically forming from the state legislature,” Martinez Fischer said. “In a congress, it’s easy to see things from a 10,000-foot view, but we’re on the ground and we’re living with these bad policies. I think it’s important to hear the real world stories of what these bills are doing in a state like Texas.”