Please ensure Javascript is enabled for purposes of website accessibility Texas Democrats have failed to pass voter access legislation for years. The pandemic may change that. - American Daily Record Press "Enter" to skip to content

Home » Texas Democrats have failed to pass voter access legislation for years. The pandemic may change that. 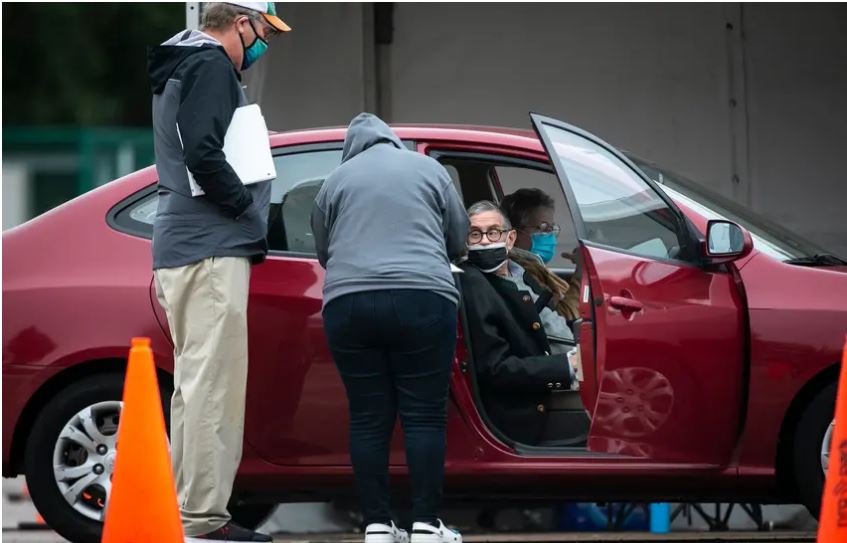 Texas Democrats have failed to pass voter access legislation for years. The pandemic may change that.

“Texas Democrats have failed to pass voter access legislation for years. The pandemic may change that.” was first published by The Texas Tribune, a nonprofit, nonpartisan media organization that informs Texans — and engages with them — about public policy, politics, government and statewide issues.

Editor’s note: This coverage is made possible through Votebeat, a nonpartisan reporting project covering local election integrity and voting access. The article is available for reprint under the terms of Votebeat’s republishing policy.

Lawmakers and voting rights groups have been fighting over updates to Texas’ election systems for years, but issues heightened by the coronavirus pandemic have launched a new conversation over voter access.

This January, primarily Democratic lawmakers heading into the next legislative session are honing in on problems like backlogs in processing voter registrations, an unprecedented flood of mail-in ballots and applications that overwhelmed some elections offices, and a lack of viable alternatives to voting in person.

Outnumbered by GOP members in both chambers, Texas Democrats have seen their efforts to expand voter accessibility thwarted at virtually every turn for years.

But the pandemic-era challenges combined with strong Republican performance at the polls — which may have been boosted by record-breaking voter turnout across the state — has some lawmakers and political operatives believing there’s potential for conservatives to warm up to voting legislation that could improve accessibility.

A main reason is that voters of all political camps experienced some of these new ideas when they were introduced during the pandemic — things like drive-thru voting pilot programs, multiple ballot drop-off sites, turning in mail ballots during early voting and extended early voting — or realized that others, like online registration, would have made voting in the pandemic easier.

“My guess is [lawmakers are] going to hear from their Republican voters that they like to do this, and there will start to be Republicans championing these things, and they’re championing them from a majority point of view,” said Trey Grayson, a former Republican Kentucky secretary of state who was previously director of the Institute of Politics at Harvard University. “I would be shocked in five years if Texas didn’t have more of these reforms in place.”

Quinn Carollo Jr. is one of those Republican voters who said he applauded efforts in Texas to make it easier to vote. He was thrilled by Texas’ lengthy early voting period — which had been expanded from two weeks to three weeks because of the pandemic. He moved in recent years from Alabama, which doesn’t have early voting.

“There was plenty of opportunity to get by there and vote without dealing with a lot of lines on Election Day,” said Carollo, a 49-year-old transportation manager for a chemical company in Houston. “So I really enjoyed that. I’m all for it.”

Carollo said he’d like to see the longer voting period become a permanent part of Texas law, along with other reforms that might make voting easier and more accessible.

At least 50 election-related bills have been filed in the House and Senate in the three weeks since the election. Most of them are aimed at increasing voter access, which lawmakers said became a more urgent issue during the pandemic.

“As soon as the pandemic hit, I began worrying about how our elections would play out,” said Rep. Jessica González, D-Dallas, a former clerk in the Voting Rights Office at the U.S. Department of Justice who has filed several pieces of legislation broadening access to the vote and says she plans to file more.

Bills already filed include legislation that would allow for online voter registration for those with driver’s licenses or state IDs, on-site voter registration at the polls during early voting and on election day, making election days state holidays, universal mail-in balloting, easing voter ID restrictions and allowing felony probationers and parolees to vote.

The idea of moving registration online is worth considering, given that some 41 other states have already implemented it, said Justin Till, chief of staff and general counsel for Republican state Rep. Greg Bonnen, R-Friendswood, who sponsored the 2019 bill that eliminated mobile polling sites and who has filed election fraud legislation to be considered this session.

“I don’t think it would be a problem if we were to transition. I know a lot of people are still hung up on the IT security part of it, which I get.” Till said. “So long as it’s a sound system, it will work fine and the other states that have implemented it thoughtfully have done so successfully.”

Till said Bonnen’s office would consider measures that could ease or expand access during early voting and eliminate long travel and wait times, such as extending the early voting period to three weeks and allowing counties to keep polling sites open beyond the state required minimum.

“If you can achieve that satisfaction point where everyone gets an opportunity to vote as quickly and as easily as they can, then you’re good,” Till said.

Voting rights advocates say that the experiences of millions of new voters in Texas this year could translate into election changes that are driven by the voters, not politics.

“I think a lot of people that had not been affected by some of the problems in our election systems were affected this time,” said Joaquin Gonzalez, staff attorney for the Texas Civil Rights Project. “So there are probably a lot more legislators who are hearing about it more from all walks of the aisle.”

A new “driving force” behind some legislation will be pressure to address or retain some voting initiatives that were born out of the pandemic, said Derek Ryan, a Republican consultant and voter data analyst in Austin.

These could include increased access to curbside voting, extended early voting periods and expanding countywide voting and online voter registration — the latter of which Ryan said was hit or miss with Republicans and “one of those issues that kind of splits the party.”

Among those that are anticipated but haven’t been filed yet are bills dealing with drive-thru voting, allowing 24-hour polling sites and making permanent a pandemic-era order by GOP Gov. Greg Abbott extending the early voting period to three weeks — all of them ideas that first appeared in some counties during the pandemic, several activists and lawmakers said.

”I think that after any election, we figure out that there are better ways to do things, and so there’s always some election legislation that kind of tries to clean up some of the process, but I think you’re probably going to see that even more so because of the pandemic,” Ryan said.

In a state that has more barriers to voting than almost anywhere else, the push to broaden voter access has largely been met with resistance from Texas Republicans, who hold the majority in the Legislature and argue that more access means more fraud.

But, the historic turnout in the election and the success of Republicans in Texas also indicate that the GOP can still win when election systems that increase voter participation are in place. The idea that high turnout only helps Democrats is one of the biggest hills to climb for changes like online voter registration — but that may change after this year, said Grayson, who advocates for automatic voter registration programs for one of his firm’s clients.

“Anyone who says Republicans can’t win with really high turnout, look at this election. There was this huge turnout, and Texas didn’t go blue,” said Grayson, who is a lawyer and GOP consultant. “The conventional wisdom was that more people means more votes for Democrats and both sides believe that, and it actually becomes a problem for some of these reforms.”

“[The election] really strikes a blow to that conventional wisdom that more turnout is bad for Republicans and good for Democrats,” he said.

So far, the bills fall along partisan lines, with few exceptions. Most legislation expanding access has been filed by Democrats, while GOP legislation focuses largely on stemming fraud.

Bills filed by Republicans include measures aimed at keeping noncitizens from voting and stiffening the penalty an election official to count an illegal vote. And this year, voter fraud rhetoric by national Republicans — led by Trump as a way to throw doubt on his presidential election loss and question the integrity of the system — may make it more difficult for local Republican lawmakers to vote for bills such as mail-in balloting.

“It is time we modernize our election code to make the election process less complicated,” she said in emailed comments to the Tribune.

This article originally appeared in The Texas Tribune at https://www.texastribune.org/2020/11/27/texas-election-voter-access-legislature-pandemic/.