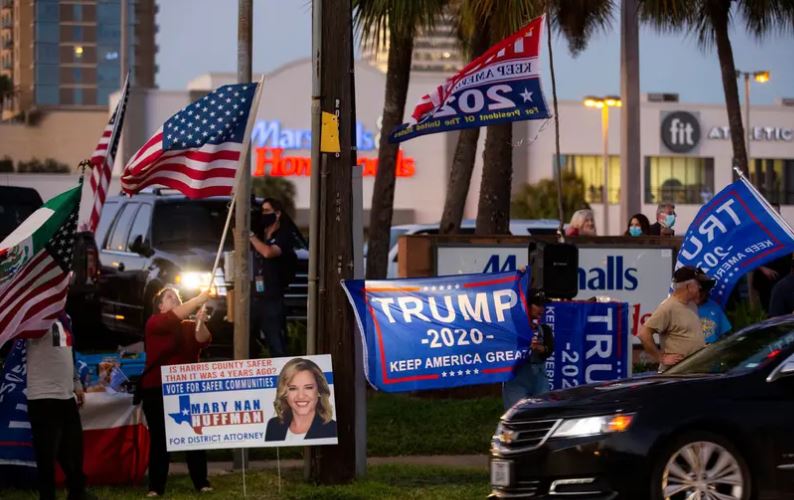 “Texas 2020 elections: 815 Texas mail-in ballots recovered and sent to counties in USPS sweep” was first published by The Texas Tribune, a nonprofit, nonpartisan media organization that informs Texans — and engages with them — about public policy, politics, government and statewide issues.

U.S. District Judge Emmet Sullivan ordered the agency to conduct two sweeps of processing facilities in the state for returned mail-in ballots that were postmarked by Tuesday.

Under Texas law, mail-in ballots that were postmarked by 7 p.m. on Election Day will be counted if county election offices receive them by 5 p.m. the following day. Sullivan required two sweeps by 3 p.m. Central time. Court documents detailed efforts to get the recovered ballots to election offices before the 5 p.m. deadline.

The court-ordered review of 14 processing plants across the state was part of an ongoing legal battle between a number of organizations, led by nonprofit Vote Forward, against the Postal Service and Postmaster General Louis DeJoy. Sullivan ordered facilities in 12 districts across the country, including Houston, to sweep for lost mail-in ballots Tuesday. The agency failed to comply. — Shawn Mulcahy

Judge orders another sweep of Texas post offices for ballots

Under Texas law, mail-in ballots that were postmarked by 7 p.m. on Election Day will be counted if they are received by 5 p.m. the following day. A second sweep of Texas facilities must be completed by 3 p.m. Central time, Sullivan ordered.

His rulings follow a similar instruction on Tuesday in which Sullivan required the Postal Service to sweep facilities in 12 districts nationwide, including Houston. The agency ultimately failed to comply. Wednesday’s action is the latest in an ongoing legal challenge led by the nonprofit organization Vote Forward against the Postal Service and Postmaster General Louis DeJoy over delays in processing election mail. — Shawn Mulcahy

About 58% of Austin voters as of Tuesday night had voted for a proposal to dedicate 8.75 cents of the city’s property tax rate for Project Connect, an ambitious $7.1 billion plan to add rail lines and expand bus service in the capital city. Similar propositions had failed in previous elections. Austinites also approved a separate proposition allocating $460 million for transit improvements such as bike lanes, urban trails and sidewalks.

“Austin is pushing to be more sustainable, equitable and affordable in new and innovative ways,” Mayor Steve Adler said in a statement on Tuesday. “The community has spoken, and it demands transformative change to traffic, climate and to achieve fundamental fairness and justice for all.”

In San Antonio, around 68% of voters approved Proposition A, which will rededicate a 1/8-cent share of an already existing local sales tax toward public transit, beginning in 2026. VIA, San Antonio’s transit agency, will be able to add the funds to the 5/8-cent share that it already receives.

Transport advocates have said the city’s system is underfunded and struggles covering the over 1,200 square miles of Bexar County.

“The revenue from this increment of sales tax will be available for transit improvements in 2026, but securing it today means that we can start important planning — and begin to tap into federal funding that has never before been available to our agency,” said Jeffrey C. Arndt, VIA President and CEO in a statement on Wednesday morning.— Juan Pablo Garnham

In a tweet, Acevedo said, “Texas Democrats can thank ‘socialist democrats and defund the police crowd’ led by @GregCasar, @JimmyFlannigan and the rest of the Austin City Council. Fact, Americans and Texans want better policing, not de-policing, and they don’t want anything to do with any form of socialism.”

The complaint refers to Austin City Council’s decision to transition about $150 million from the police department budget into other areas of public health and safety, according to a report from KXAN. — Aria Jones

[5 a.m.] Texas Democrats underperformed the high expectations they had set for themselves on Election Day, most notably in a hotly contested battle for dominance in the Texas House. That appeared to end with a narrow victory for Republicans, leaving intact the party’s advantage in the chamber.

And a number of potential pickups for Democrats in the U.S. House of Representatives seemed increasingly unlikely early Wednesday.

[5 a.m.] U.S. Sen. John Cornyn, R-Texas, defeated Democratic challenger MJ Hegar on Tuesday. Hegar called Cornyn and conceded within minutes of the race being called, according to both campaigns. Cornyn was competing for his fourth term against Hegar, the former Air Force helicopter pilot who unsuccessfully ran for U.S. House two years ago in suburban Austin. — Patrick Svitek

This article was originally published on Texas 2020 elections: 815 Texas mail-in ballots recovered and sent to counties in USPS sweep