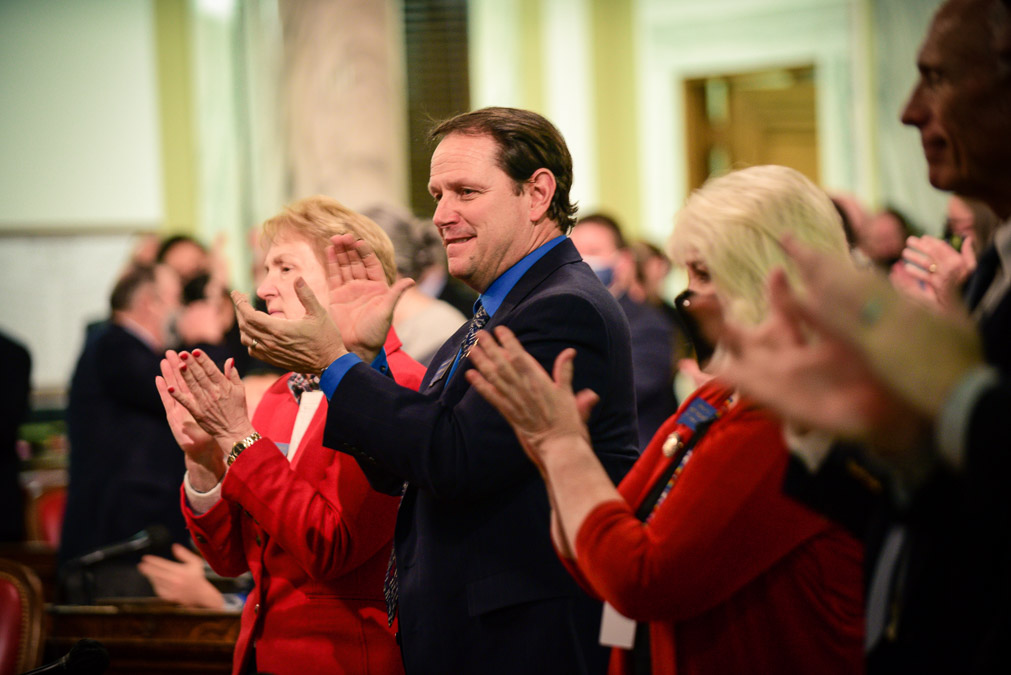 In a comment published by the Flathead Beacon this week, prominent Rep. Derek Skees, R-Kalispell, disparaged Montana’s state Constitution, lamenting that its right of privacy clause has given state courts a legal basis for blocking new abortion restrictions and calling the document a “socialist rag” that should be replaced.

“There’s no basis in our constitution to use the right to privacy to murder a baby,” Skees said, according to the Beacon. “The courts have humongously failed and we need to throw out Montana’s socialist rag of a constitution.”

“I have actually never heard anybody refer to it as a socialist constitution, so that is pretty surprising to me,” said Mae Nan Ellingson, who helped draft the document as a delegate at the state’s 1972 constitutional convention.

“I feel very strongly that the right of privacy is not a socialistic idea,” Ellingson also said. “If you look at socialistic or communistic governments, one thing that most people lack is privacy.”

Reached by text Thursday with a description of the quote published by the Beacon and a request for further explanation, Skees said he was at a hunting camp and offered to speak with a reporter after next week’s Thanksgiving holiday. He did not disavow the quote or dispute its accuracy.

Skees is in his fourth term as a state representative representing a House district south of Kalispell and, facing term limits, has announced a run for the Montana Public Service Commission, which regulates utilities. He served as the chair of the Legislature’s House Rules and House Energy, Telecommunications, and Federal Relations committees during this year’s legislative session and is also the treasurer of the Montana Republican State Central Committee.

Spokespeople for the Legislature’s Republican majority leadership, Gov. Greg Gianforte, Attorney General Austin Knudsen and the state Republican Party did not reply to inquiries Thursday asking whether they believe “socialist rag” is an appropriate description of the Montana Constitution and whether they believe the document should be replaced.

The Montana Constitution includes a clause declaring “The right of individual privacy is essential to the well-being of a free society and shall not be infringed without the showing of a compelling state interest.”

Fuller said in an interview with MTFP Thursday that his comments had been about the U.S. Constitution, not Montana’s. His belief, he said, is that personal rights enshrined in the federal Constitution trump the privacy protections in the latter.

“Your right to privacy does not give you the right to take someone else’s life. That I firmly adhere to,” Fuller said.

Montana’s constitutional privacy protections have, however, been routinely cited in state court rulings reining in legislative efforts to restrict abortion. The Montana Supreme Court’s 1999 Amstrong v. State ruling, for example, concluded that “procreative autonomy” should be protected as a matter of personal privacy similarly to how the Constitution protects Montanans from government surveillance. That ruling was cited last month by a lower court judge who issued a preliminary injunction temporarily blocking several abortion restrictions passed by this year’s Legislature.

The current Montana Constitution, ratified with a statewide vote in 1972, replaced the prior constitution adopted with statehood in 1889. Amendments can be advanced either by citizen initiative, requiring signatures from 10% of qualified voters, or by the Legislature with support from at least two-thirds of the state’s 150 representatives and senators. In either case, amendments don’t become constitutional law unless they survive any court challenges and win majority support in a statewide vote.

Similar initiative and legislative processes can spur a call for a convention to draft a new constitution, and Montanans must also vote on whether they want to replace the 1972 Constitution at least once every 20 years. Votes to call a new convention failed by an 18-82 margin in 1990 and a 41-59 margin in 2010.

Republicans currently hold 98 seats between the Montana House and Senate, meaning they could win enough support for the GOP to unilaterally place constitutional amendments before voters if the party picks up two more legislative seats in next year’s election cycle.

Montana Republicans have also at times sought to shift the state’s laws more toward their liking by reshaping the judiciary itself. This year, for example, the Legislature passed a referendum measure that intends to ask voters whether to change the elections that pick Montana Supreme Court justices from statewide to district-based contests — a proposal critics derided as “judicial gerrymandering.”

That referendum proposal is facing a pending legal challenge in Silver Bow District Court, with a list of plaintiffs that includes Ellingson.