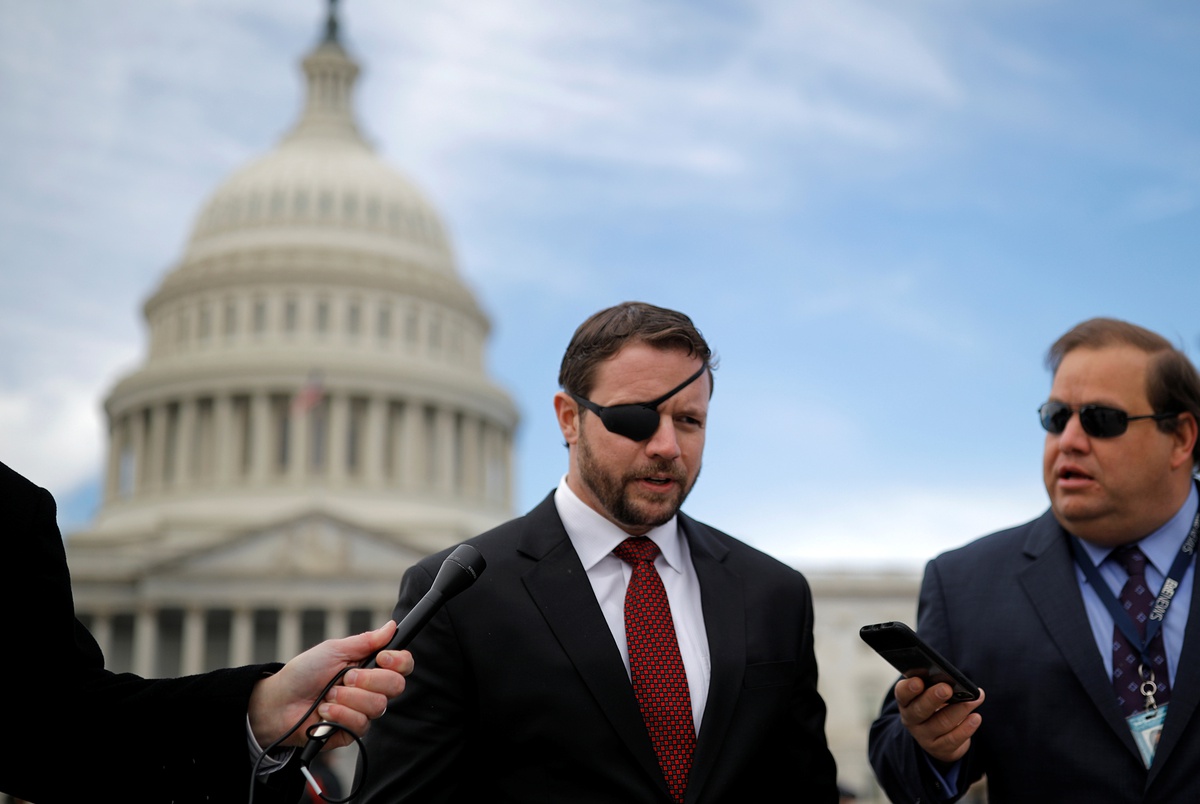 The coronavirus pandemic — and incumbents’ response to it — is rippling through almost every competitive race in Texas right now, from U.S Sen. John Cornyn‘s reelection bid to the multitude of contests that will decide control of the Texas House.

But in one congressional race, the fight has become particularly pitched, drawing in dozens of Houston-area doctors and putting a high-profile incumbent on the defensive.

Democrat Sima Ladjevardian has wielded the issue doggedly against U.S. Rep. Dan Crenshaw, R-Houston, who is increasingly pushing back amid a storm of claims that he has not taken the pandemic seriously enough and has undermined public health.

“I just absolutely think he’s been failing his constituents,” Ladjevardian said in an interview. “An elected official is responsible to give facts, set an example and help the community. … I think people are hurting, we need elected officials to really be the role models they need to be, and he absolutely has not done that.”

Crenshaw’s campaign brushes off the idea that he as not taken the pandemic seriously, noting in a statement for this story that he has distributed 50,000 masks in Houston and pushed for the extension of federal funding for testing sites in the city.

“Dan Crenshaw’s leadership throughout this pandemic speaks for itself,” Crenshaw campaign spokesperson Justin Discigil said. “While his opponent has spent her time tweeting from behind the walls of her mansion during this pandemic, Dan has been working tirelessly to help his community.”

Crenshaw and his campaign appear to be increasing their efforts to defend his record on the pandemic. In late July, his campaign sent out a mailer seeking to debunk three lines of criticism from Ladjevardian regarding his coronavirus response.

Yet Crenshaw is a formidable opponent as a massive fundraiser with arguably the biggest profile — and platform — of any Republican in the Texas U.S. House delegation. He was the only Texas elected official to speak last week at the Republican National Convention.

Ladjevardian is hoping Crenshaw’s actions and statements on the pandemic can turn the tide in her favor — and he has given her plenty of material. He had an early and high-profile role in defending President Donald Trump’s handling of the pandemic, in the form of an April interview with HBO host Bill Maher that Trump hailed as “BRILLIANT, A MUST WATCH!”

The race for Crenshaw’s seat is not the only one on the national radar where a Democratic challenger is scrutinizing their Republican opponent’s pandemic response. In the 22nd District, also in the Houston area, Democrat Sri Preston Kulkarni is calling out his GOP opponent, Troy Nehls, for his criticism of Harris County’s April mask order. In the 21st District, U.S. Rep. Chip Roy‘s skepticism of coronavirus-related lockdowns has given Democratic rival Wendy Davis ample fodder, not to mention the Austin Republican’s vote against a coronavirus relief package earlier this year.

And in the U.S. Senate race, Democrat MJ Hegar is arguing that Cornyn has not taken the coronavirus seriously enough, pointing to things like Cornyn’s mid-March tweet with a picture of a Corona beer and the message: “Be smart; don’t panic. We will get us through this.”

But Crenshaw’s race has taken on a life of its own when it comes to the pandemic. Earlier this summer, a Ladjevardian supporter, Houston pediatrician Christina Propst, helped organize a letter calling out Crenshaw — as well as Lt. Gov. Dan Patrick — for allegedly “spreading the virus of disinformation.” The letter grew to include more than 100 Houston-area medical professionals.

“We implore you to stop playing politics, stop spreading dangerous disinformation, and start leading by example,” the letter said. On Crenshaw specifically, it cited him not wearing a mask at certain events and alluded to comments like the one he made June 18 arguing that “we can’t allow fear-mongers to use new cases to push for new lockdowns.”

In response to that letter, a trio of doctors put together their own letter defending Crenshaw, according to his campaign. That letter now has 75 signers, including three current and former GOP state representatives from the Houston region who are doctors: John Zerwas, Tom Oliverson and Greg Bonnen.

“Dan Crenshaw’s stance from the beginning has been based in science and common sense,” the letter says. “We saw first-hand the extreme costs of universal lockdowns, and Congressman Crenshaw was one of the few politicians willing to apply common-sense leadership to policy making as a true Texan.”

While Ladjevardian has pounced on a litany of things Crenshaw has said about the pandemic — on hospital capacity in Houston, the death toll statewide — the issue of masks keeps coming up.

She seized on an early March tweet in which he said masks do not protect the general public from the coronavirus. He was echoing the guidance at the time from U.S. Surgeon General Jerome Adams, who was urging people to stop buying masks so there would be enough available for health care providers.

When Harris County Judge Lina Hidalgo announced a countywide mask mandate in late April, Crenshaw said he believed that “masks in confined spaces should be strongly promoted” but called the penalties “draconian” and suggested the order could “lead us to government tyranny.” Like other Texas Republicans who bashed Hidalgo’s requirement at the time, Crenshaw pointed to the potential of a $1,000 fine or 180 days in jail, though the threat of jail time was only included in a draft order, and county officials later said it would not be enforced.

Crenshaw was much more approving weeks later when Abbott issued a statewide mask mandate, saying it was “a targeted measure and the governor makes a very good case for it.” The penalty structure was different from Hidalgo’s in that it called for a warning on first offense and then a fine of up $250, while ruling out jail time. Crenshaw stood by his previous criticism of Hidalgo’s mandate, saying its penalties were “way over the top and draconian.”

Even if the county and state mask orders carried different penalties, Ladjevardian argued, Crenshaw politicized the issue from the start with his talk of “government tyranny” in reference to Hidalgo’s mandate. And she has pointed to more recent comments he has made questioning the benefit of masks, as well as his own choice not to wear them at certain public events.

One of the highest-profile examples came late last month when Crenshaw was a speaker at the Travis County GOP’s Ronald Reagan Gala in the Austin area. Photos from the event showed little mask-wearing, including by Crenshaw. An Austin resident filed a complaint about it, and the county is investigating, according to the San Antonio Express-News. Crenshaw’s spokesperson told the newspaper that Crenshaw “wore a mask during the entirety of the event other than when he was speaking and for a few, brief photos that were taken outside.”

There are, of course, exceptions to the mask rules that Crenshaw and other Texas politicians fall under due to their positions. For example, Abbott’s order exempts anyone giving a speech “for a broadcast or to an audience.”

More broadly, Crenshaw’s campaign insists he uses “common sense” and believes it’s appropriate to wear a mask when inside, close to other people. That standard nonetheless appears to fall short of Abbott’s order, which says every Texan should wear a mask “when inside a commercial entity or other building or space open to the public, or when in an outdoor public space, wherever it is not feasible to maintain six feet of social distancing from another person not in the same household.”

It remains to be seen how prominent the pandemic will be as Ladjevardian and other Democratic candidates enter the fall faced with decisions about which issues to spend money to broadcast on TV. Ladjevardian promised it would remain a top issue of hers, especially when paired with the broader health care concerns that she is running to address in the district.

“There is not a bloc of voters that I am not hearing this from,” she said. “I hear this from everyone.”