Home » NYC Politicians Parade in Puerto Rico, With Races From Governor to Council Speaker at Stake 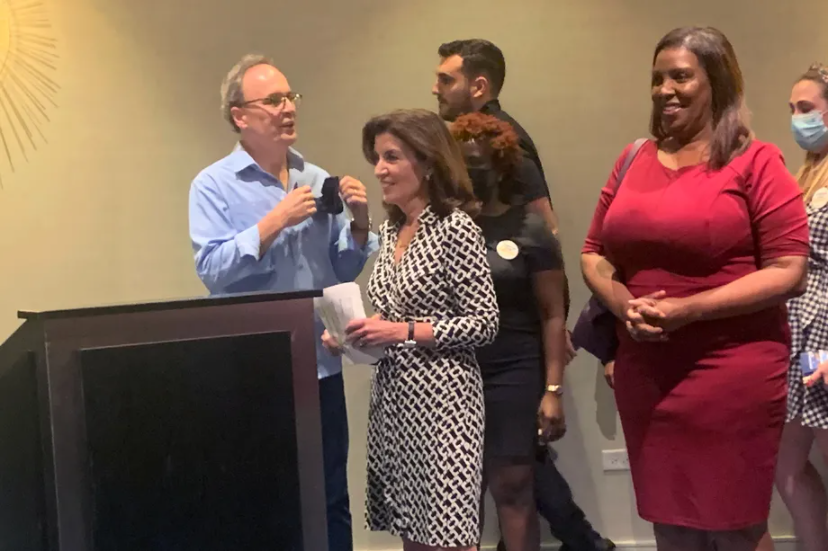 NYC Politicians Parade in Puerto Rico, With Races From Governor to Council Speaker at Stake

Back home in Brooklyn, hundreds of absentee ballots — which by law cannot be opened until Nov. 15 — will determine whether City Councilmember Justin Brannan will keep his seat.

But at the Banyan Tree Pool Bar at the El San Juan Hotel on Thursday, the Democrat raised a glass to toast nearly a dozen of the newest Council members, and vowed to battle alongside them for a better New York City.

“Whatever it is, I’m going to be there for you,” he said. “We’re gonna fight together.”

Brannan is one of several Council members jockeying to lead the 51-member body. But he’s the only one running for speaker whose race is still undecided: He trails Republican newcomer Brian Fox by 255 votes.

“Democrats in southern Brooklyn don’t win by a landslide,” Brannan said during the reception, which he co-hosted as part of the annual Somos conference.

Following Election Day, New York’s political power brokers travel to Puerto Rico for the annual Somos gathering, a get-together hosted by members of the state Legislature to discuss the priorities and needs of Latino communities in New York.

Part solidarity trip with the island to do community service, the retreat has become a post-election download that sets the tenor of New York politics for the year to come. Victories are celebrated and alliances are made.

Last year’s Somos was canceled due to the pandemic.

This week’s confab under the sun comes on the eve of a year that will bring a new mayor, a reconstituted Council — and pitched battle for governor after the resignation of Andrew Cuomo, who stepped down in disgrace over sexual harassment allegations.

“There’s never been a Somos like this,” one longtime Democratic aide observed.

Their goal: to hit the conference circuit in a bid to build a backing among influential labor leaders, lobbyists and fellow politicians.

Mayor-elect Eric Adams arrived on Thursday to extend his victory lap as he pieces together his administration.

Key to his success will be his relationship with the overhauled Council, which will include up to seven Republicans, with a handful of races — Brannan’s among them — still undecided.

Brannan and fellow Council members are running to take the place of term-limited Speaker Corey Johnson for a post that’s essentially the second most powerful job in city government.

Council members said to be vying for the job include Keith Powers and Carlina Rivera of Manhattan; Adrienne Adams and Francisco Moya from Queens; Diana Ayala of the Bronx; and Farah Louis from Brooklyn.

There will be more women in the Council than anytime in New York history, along with a batch of progressive newcomers. Meanwhile, Republicans were poised to make gains in a city that’s overwhelmingly blue.

Brannan said his close race didn’t reflect his work as a Council member but instead the national divisiveness in politics.

As of Wednesday, there were 3,270 absentee ballots — 2,379 of them from registered Democrats, the city Board of Elections reports. Brannan’s team expects the return rate, currently at 45%, to shoot up to between 60% and 70%.

“All of the most conservative models provide Councilman Brannan with a margin substantially above 255 — and provide enough room to build a winning margin despite a horrible climate for Democrats across the country,” his campaign wrote in a memo.

Other politicians were playing for even bigger stakes.

Cuomo’s resignation in August left a power vacuum as various Democrats strive to consolidate support and influence among elected officials and powerful labor unions in their bid to become the state’s next executive.

James, whose office led the investigation into Cuomo, arrived Wednesday afternoon as she kicked off her bid last week to challenge Hochul next year.

During a stop at the Santiago Iglesias Pantín Elementary School on Thursday morning to discuss the upcoming Supreme Court case over federal safety net services denied to Puerto Ricans, James offered a glance into her campaign strategy: a focus on poverty and inequity.

“Today I’m here to talk about something that is at the core of who I am and what I’m all about. it’s economic justice and the application of law to all Americans,” James said. “As someone who grew up in a humble home — we can alleviate poverty. Poverty is also oftentimes intentional.”

Lounging poolside at the Royal Sonesta San Juan hotel, elected officials who spoke to THE CITY declared the conference “Tish Territory” for the number of supporters hailing from the five boroughs who are privately backing her.

Hochul, Cuomo’s former lieutenant governor and the state’s first executive in generations not to hail from the five boroughs or the surrounding suburbs, declared her bid to run for governor as soon as she ascended to the top job.

“I’m going to make one quick point and you can get back to the mojitos,” Hochul said.

She flew down to Puerto Rico Thursday afternoon, traveling on the same flight as de Blasio, who recently filed paperwork to run for governor.

This article was originally posted on NYC Politicians Parade in Puerto Rico, With Races From Governor to Council Speaker at Stake