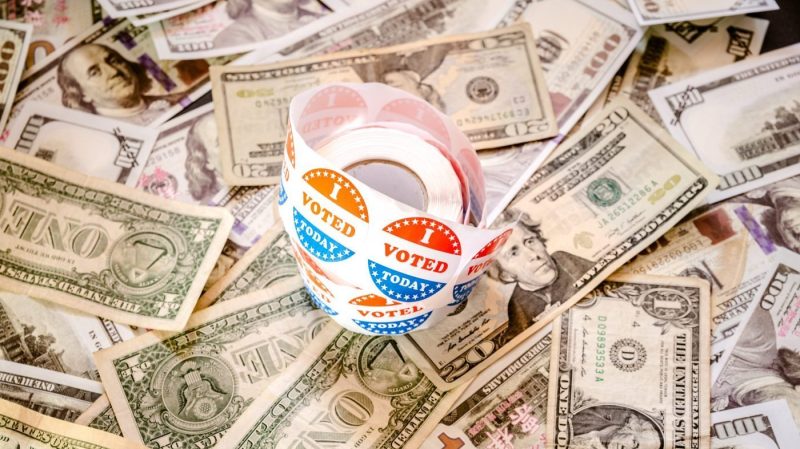 With the contest between incumbent U.S. Sen. Steve Daines and term-limited Gov. Steve Bullock among the country’s closest U.S. Senate races, political dollars have surged into the race from around the nation, funding the steady barrage of mailers and political advertisements now pelting Montana voters.

In addition to $64.7 million in direct spending funded by contributions to the candidates’ respective campaigns, the race has generated $96.6 million in third-party spending by political committees, according to campaign finance data reported to the U.S. Federal Election Commission through Oct. 27.

Even with the final days of campaign spending yet to be reported, that $161 million total — or $217 for each registered Montana voter — is enough to make the race the most expensive in Montana history.

The previous record was set in 2018, when Sen. Jon Tester won a third term in the Senate over a challenge from Matt Rosendale. Campaign spending and independent expenditures in that race totalled more than $70 million, according to the Associated Press.

More than a century ago, in 1899, when Butte copper baron William A. Clark literally bribed the Montana Legislature into electing him to his first term in the U.S. Senate, Clark spent between $272,000 and $400,000, according to estimates cited by historian Michael Malone and co-authors in their book Montana: A History of Two Centuries. Adjusted for inflation, that translates to between $8.5 million and $12.4 million in 2020 dollars.

According to Malone, the Gilded Age political spending of Clark’s first Senate bid included a reported $30,000 worth of champagne and bribes for state lawmakers, who selected U.S. senators before the ratification of the 17th Amendment in 1913. Clark also reportedly bribed members of a grand jury tasked with investigating corruption in the appointment process.

As Montana voters pick a senator this year, they know firsthand that a majority of the political money in the race has been spent on negative advertising.

The campaigns themselves aren’t required to tell the FEC whether their spending goes toward positive or negative messaging, but the campaigns have spent less on the election than third-party groups, which do report how they’re targeting specific candidates. Of the outside spending reported through Oct. 27, $45 million and $37 million has gone to discourage support for Daines and Bullock, respectively, versus $6.3 million (pro Daines) and $8.7 million (pro Bullock) spent getting voters excited about the candidates.

With the outcome of the race potentially determining which party controls the U.S. Senate in the coming years, much of the money fueling the advertising maelstrom in Montana — both via third party groups and routed through the candidates’ official campaigns — is coming from out of state.

The national donor outpouring for Bullock appears to result in part from a surge of giving to Democratic candidates following the Sept. 18 death of Supreme Court Justice Ruth Bader Ginsburg. Bullock’s campaign finance reports indicate he raised $2 million in itemized individual donations between Sept. 18 and Sept. 20, versus $646,000 over the previous three days.

Most of that money came from out of state, with Montana donors representing just 3% of Bullock’s individual support in the three days following Ginsburg’s death.

It’s harder to pinpoint how much of the third-party money sloshing around the Senate race is and isn’t coming from Montana residents, since most of the groups reporting independent expenditures are national organizations that spend on multiple contests nationwide. While those groups have some Montana donors in some cases, most of their support typically comes from higher-population states like California and Florida.

Unlike the Daines and Bullock campaign committees, third-party political groups that nominally operate independently from the campaigns aren’t necessarily subject to contribution limits, but are required to list their “independent expenditures” as well as their supporters in reports filed with the FEC. When those supporters are individual people, it is possible to trace the independent spending to its source. But when those supporters are 501(c)(4) organizations that aren’t required to disclose their own donors — so-called dark money groups — it often isn’t possible to know where that money is coming from, or gauge the agenda behind it.

However, many super PACS — political action committees allowed to accept unlimited contributions for campaign-independent political activities — do in fact disclose the names of some or all of their donors in their campaign finance filings. The same is true of other political groups involved in Montana’s Senate race.

This super PAC is one of several political committees associated with Americans for Prosperity, the conservative group founded by billionaire David Koch to advocate for lower taxes and limited government spending. This specific AFP political committee reports spending $2.8 million to boost Daines in the 2020 cycle, and about $429,000 against Bullock. Multiple political committees associated with AFP have spent $39.2 million nationally on independent expenditures this election cycle. While AFP is famously a 501(c)(4) group that doesn’t disclose its donors, many of this specific committee’s contributors are individuals listed by name in its financial filings. Its receipts include $3.5 million from Arkansas businessman Ronald Cameron, the chairman of international chicken processor Mountaire Farms, as well as $6 million contributed by Koch Industries.

This super PAC is a wing of the national trade association, and has spent $1.3 million in support of Daines, and $13.4 million nationally on independent expenditures this cycle. Most of the fund’s receipts reported to the FEC come from the National Association of Realtors, which is itself a 501(c)(6) nonprofit, the tax designation used by the IRS for business associations. Tax filings for 2018 indicate that most of NAR’s revenues come from member dues.

This is a Republican super PAC that exists “to protect and expand the Republican Senate Majority.” It is described by FactCheck.org as having been established by allies of Senate Majority Leader Mitch McConnell. The group has reported $212 million in independent expenditures so far this election cycle, including $21.8 million against Bullock and about $24,000 in support of Daines. Many of the fund’s donors are listed in campaign finance reports, with major supporters including Las Vegas casino magnate Sheldon Adelson and his wife, Miriam, who have given a combined $50 million.

The NRSC is a national Republican organization that works to elect Republicans to the United States Senate. Its chairman is Sen. Todd Young of Indiana. The group has reported $89.7 million in independent expenditures so far this election cycle, including $11.8 million opposing Bullock and about $20,000 supporting Daines. FEC records for the NRSC list more than a million itemized receipts, many of them small-dollar donations from individuals.

This is a conservative super PAC that describes its mission as “defeating big-government politicians and replacing them with pro-growth, limited government conservatives.” The group has spent $58.6 million on third-party expenditures this election cycle, including about $166,000 supporting Daines and $1.4 million against Bullock. Most of the group’s donors are listed in campaign finance filings, including $24 million in support from Richard Uihlein, an Illinois businessman who owns a shipping supply company.

This super PAC, which uses a longtime Daines campaign slogan for its name, has spent only on the Montana Senate race, putting $895,000 against Bullock. Its donors are listed in campaign finance filings and include Montanan Tim Barnard of Bozeman-based Barnard Construction, who contributed $100,000 to the committee.

This is a super PAC arm of the 501(c)(4) group Montana Hunters and Anglers Action, which says it works to defend hunting and fishing opportunities on Montana’s public lands. The group’s treasurer is Barrett Kaiser, a partner at Hilltop Public Solutions, former aide to Montana Sen. Max Baucus, and adviser to Bullock’s 2012 gubernatorial campaign. The political committee has made federally reported independent expenditures only on the Montana Senate race, spending a total of $3.9 million, with $2.1 million of that going to support Bullock and $1.8 million spent against Daines. While the group is registered in Billings, the vast majority of the support it has reported to the FEC comes from outside Montana. Major donors include California liberal megadonor Karla Jurvetson and the United Brotherhood of Carpenters, a national union, each of which contributed $500,000 to the fund. The group also reports a $265,000 contribution from the LCV Victory Fund.