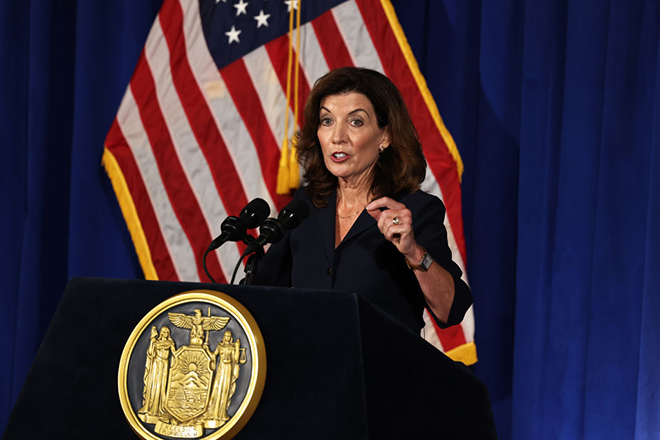 By Steve Bittenbender on September 7, 2021

New York Gov. Kathy Hochul gave the first official COVID-19 briefing of her administration on Tuesday. In speaking at the University of Buffalo Jacobs School of Medicine and Biomedical Sciences, her remarks represented a far different approach than former Gov. Andrew Cuomo took.

No other administration officials walked in with the Buffalo native, as she was accompanied by University President Dr. Satish Tripathi and Dr. Michael Cain, dean of the medical school and the university’s vice president for health services.

There was no COVID Mountain, nor any other props from the bygone era behind her. No PowerPoint display and no mention of “New York Tough,” either. Toward the end of her 18-minute speech, she started ruffling through her pages and rehashing the main points she stated.

“Making sure I didn’t forget something. There might be some other great announcement,” the governor added with a laugh right after that list. “I like to wing it little more than I should, I know. My staff’s like, ‘Why didn’t you stick to the script?’

“I’m going to remain unscripted. Hochul unscripted, just get used to it.”

Beyond being unscripted, the new governor also noted there will likely be a more decentralized approach to battling the pandemic.

Among the announcements, Hochul said she was making $65 million in funding available on Tuesday to help local communities set up mass vaccination sites and plans for COVID-19 booster shots.

“You figure it out,” she said. “You know your communities better than anybody.”

Moments before, she also pledged that she would not be “micromanaging” the response.

“I’ll be giving guidance based on your input,” she said. “I’ll be giving you the cover you need. I’ll be there to be the ally, but I will not be imposing state people and locations on all of you without consultation. You tell us where there’s gaps. Tell us where something needs to be enhanced by the state, and we’ll be there without stepping on the local public health agencies.”

That’s not to say there may not be some top-down orders or mandates. In her ramp-up to becoming governor, she said the state Department of Health had the authority to issue a mask mandate for schools.

On Tuesday, her eighth day in office, she told gathering in Buffalo that she would make tough decisions when they’re needed, like masks. Still, she added there will be flexibility to lift the mandate earlier in certain parts of the state if conditions show improvement there.

Some of her decentralized plan may also have to do with the powers available to her compared to Cuomo. She said that her administration is working on getting “legal clearance” on a vaccine-or-test mandate for people who enter school facilities.

“I think that’s a compromise, but it’s also …,” the governor said before pausing briefly. “I want everyone vaccinated. I don’t have the authority. I don’t have the same executive power that was in place last year. But if I did, sure as I’m standing here, I would mandate it.”

The test-out option likely will not be available, though, for staff at state-regulated health care facilities, including long-term care facilities. Hochul said the state is looking at options to expand the order Cuomo issued earlier this month.

“We have to let people know when they walk into our facilities that the people that are taking care of them, their loved one in a setting are safe themselves and will not spread this,” she said. “And we saw what happened with that last year.”

Even before she took over for Cuomo, Hochul faced calls to fire Cuomo-era staff and officials. Among the most targeted by critics has been Health Commissioner Dr. Howard Zucker.

Last Friday, U.S. Rep. Lee Zeldin, the Long Island congressman and favorite to be the Republican gubernatorial nominee next year, started a petition drive on his campaign website calling on Hochul to dismiss him.

Hochul has previously said she’s committed to removing anyone from her administration mentioned in the Attorney General’s sexual harassment report on Cuomo. Zucker was not named in that report. However, the Cuomo administration’s nursing home policies and reporting of deaths have been under investigation as well.

Last Thursday, she said she’s planning a transition period to help shape her administration and leadership.

“That’s why I’ve asked for a 45-day period,” she said. “There are individuals who will be gone sooner than that. Many have already been removed or left on their own because they knew they would not be in my administration, but I am very excited about the people, high caliber and talented professional people, who’ve reached out to us.”