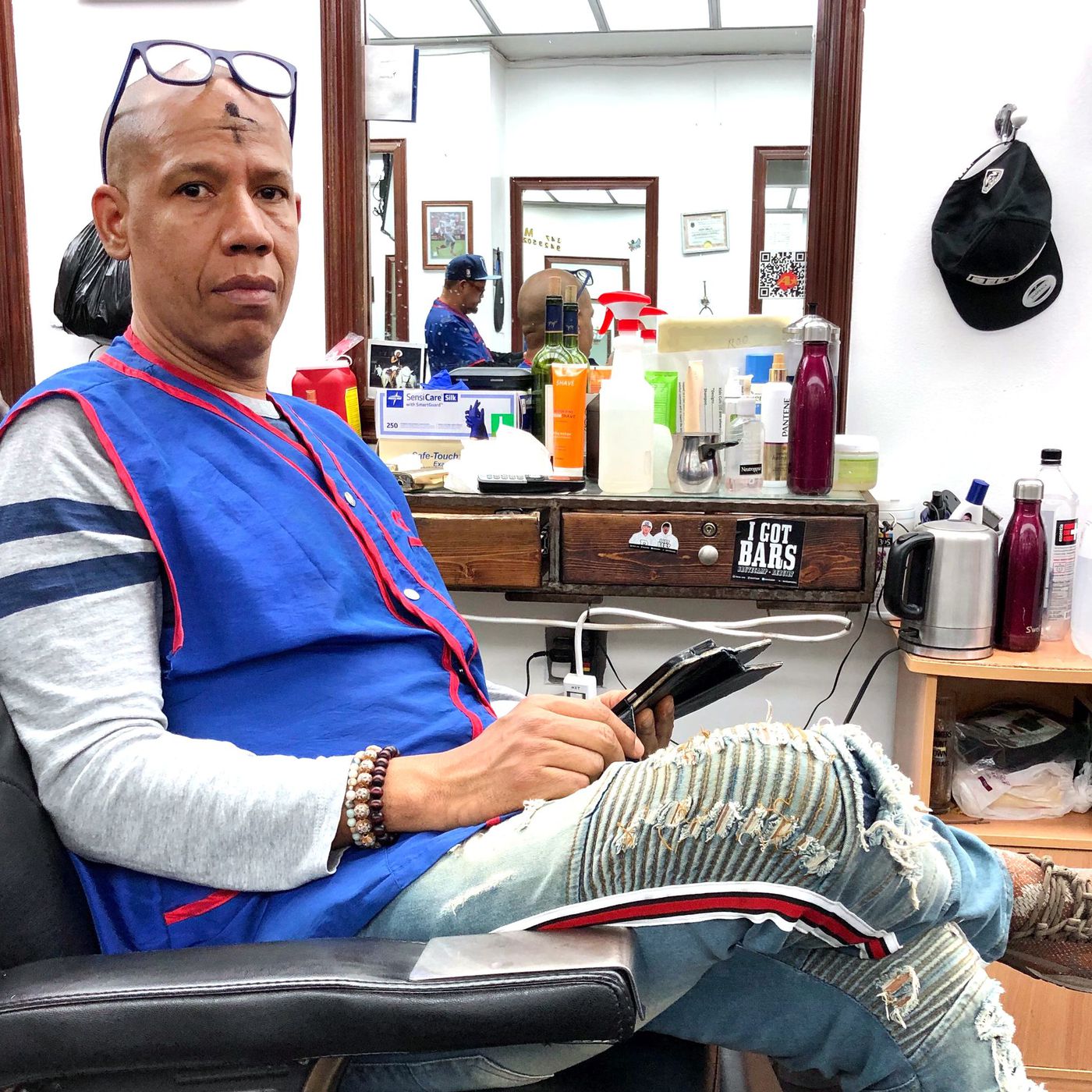 How New Yorkers Really Feel About Bernie, Mike and the Rest of the Presidential Pack

But with 15 states holding party primaries in the coming week, including “Super Tuesday” on March 3, the presidential contest is heating up — and New Yorkers are paying close attention.

They’re sorting through a broad field of candidates and calculations, balancing their preferences with the goal shared by most Democrats of toppling President Donald Trump — a lifetime New Yorker until his recent defection to Florida.

Two others White House hopefuls with strong New York ties — Brooklyn-born Bernie Sanders and former Mayor Mike Bloomberg — are also much on the minds and lips of folks across the city.

THE CITY listened in as New Yorkers described how the primary picture looks to them.

Two topics have dominated discussion here lately: elections in the Dominican Republic — and in the United States.

“People are really disappointed about both,” said barber Domingo Santos, 50.

“In the DR, people only saw one party listed on the screen when they tried to vote. Maybe it was a huge mistake? Hmmm. And here, people thought Donald Trump was going to get kicked out of office, and then it didn’t happen. So they’re worried he’ll win again.”

Last weekend, thousands took to the streets of Washington Heights following ballot irregularities in the Caribbean nation. Like Santos, protestors were dubious of the official explanation that a computer glitch caused problems at the polls.

Instead, they suspected the municipal-election vote was halted to benefit the governing Dominican Liberation Party. Voting has been rescheduled for March 15.

“What happened over there, I don’t think it could happen here, but people are saying, ‘Why bother to vote?’” said Santos, a registered Democrat who became a citizen four years ago. “But I’m going to vote. You can’t surrender.”

Santos has not yet decided on a candidate. “Bernie is good, but he’s too old,” he said, referring to the 78-year-old senator from Vermont. “He really wants to do the job. He’s not in it for the money and the power, like the sociopath in there now.”

His colleague, a barber who goes by Popeye, added, “No Donald Trump. That’s all I know.”

But Trump’s not all bad, according to Arismendy Gill, who applauded the president’s stance on gun ownership.

“If you grew up in a tough neighborhood in The Bronx like I did, you know that you can’t give the criminals the advantage,” said Gill, 27. “He’s got it right on the Second Amendment.”

But Gill, a retailer, said he’s likely to support Bloomberg.

“I don’t hate on the rich,” Gill said. “He earned his money and I respect hard work. Small businesses need some help.”

Cedric Cannonier and Cindi Codere, friends and registered Democrats, meet regularly at the library to catch up over coffee.

This past Wednesday, the morning after the latest Democratic debate, they talked politics — and came away confirmed in their support for former Vice President Joe Biden.

“I think he has the knowledge,” said Cannonier, 57, of Jamaica. “He has the presence. He has the connections in the world because he’s been there before.”

Codere said she savored a return to a civilized tone in the White House.

“I liked when [Barack] Obama was in office,” said Codere, 48, of Queens Village. “I liked how well they worked together. There’s a certain decorum…. As someone who grew up in the old school, you just don’t get that from Trump.”

Both said they will happily vote in November for whoever becomes the Democratic nominee.

Cannonier said he likes Sanders’ consistency. Codere called Warren a “strong, intelligent woman” who is “certainly much smarter than Trump.”

Codere said that while her husband is “all in for Bloomberg,” she takes issue with how the former mayor handled homelessness in New York.

“I was in the shelter system with my first-born child,” she said. “I didn’t ask to be in that situation.

“But everything that was in play that could have helped us get out of that situation sooner than we did, he stopped it,” she added. “So when I think about him in that sense, I have a problem with him in this race.”

“It feels like Bloomberg and Trump are the same person,” he said during a cigarette break outside the courthouse Wednesday morning.

The father of two said he was a “victim” of NYPD stop-and-frisks when he was a teen living in Harlem during Bloomberg’s mayoral stint. Sometimes, Nunez said, he’d brave cold weather without a coat to avoid arousing suspicion from police.

Bloomberg recently apologized for the policing practice, which peaked during his mayoralty. But Nunez said he is not buying the rebrand: “It seems like it’s all bullshit.”

But Nunez was outnumbered outside the courthouse by fans of the former mayor.

“Bloomberg is for the people,” said Anderson James, 50, currently a defendant in a criminal case.

“I think they are all the same,” Martinez, who’s lived in the borough for 35 years, said in Spanish. “Everyone promises. But what is the truth?”

Jose Santiago, 36, and Olivia Lombardi, 28, have decided it’s best to avoid talking politics at work. But on a smoke break from their jobs at Simon’s Hardware on Third Avenue in Kips Bay, they got into it.

“I’m a Bernie guy — or a Bernie gal,” Lombardi said with a laugh.

“I’m a Bloomberg guy,” Santiago said. “I loved him as mayor.”

Chatting about Tuesday night’s Democratic debate, they agreed on one thing: The candidates were all over the place. “It was like watching children,” Santiago said.

The pair also agreed on another point: Health care is a priority. Santiago has watched a friend struggle with an ailing mother who was left bed-bound by a recent stroke. Her health insurance doesn’t cover her needs.

“The doctors are like, this is America,” he said.

Lombardi piped up: “Don’t you think universal health care would help her?”

“Of course it would! One hundred percent” Santiago said emphatically.

And like that, they found another thing they agree on.

“I’m way for it,” Santiago added. “And I’m willing to pay way more taxes if I have to do that. Because if it’s just here, imagine how many other people are like that in that situation? I wouldn’t want my mom to go through that.”

Then, another difference. Are they confident Lombardi’s guy, Sanders, can beat Trump?

“I am,” she said. Santiago just shook his head and smiled. — Rachel Holliday Smith

Ahead of a community meeting on bail reform Wednesday night, Dana Koenigsberg put down “Howl’s Moving Castle” — a fantasy novel she’s reading to take her mind off politics.

But avoiding politics these days is fantasy itself.

Koenigsberg, 28, is an Elizabeth Warren fan — “She has a plan for everything” — but conceded she’s “also very comfortable with Bernie Sanders.”

“I’m one of the people who says at this point then we need to go in the direction as long as it’s moving progressively and we’re moving forward not backwards,” said Koenigsberg, who lives in New Dorp.

Natasha Zapata, of Grymes Hill, who was sitting close by, agreed. She said she’s “blue no matter who” — but is concerned Democratic divisions could bruise the nominee.

“I worry about it. I already went through this with Max Rose,” said Zapata, 62, referring to the moderate Democrat who won Staten Island’s Republican-held House seat in 2018.

She said she didn’t vote for Rose in the primary, but later realized he was the best candidate for the general election.

Zapata, who teaches art at Snug Harbor Cultural Center and volunteers at the zoo, came to her own presidential primary decision by taking several online questionnaires. She’s leaning toward Warren. Sanders is still a close second.

“Two things are for sure in life: paying taxes and dying, so before I die I want my taxes to go to things that really matter like schools and health care,” said Zapata.

It’s a subject close to both: McFadden and Revo are doulas. Revo is a new mom.

Both are Sanders fans.

“He’s the only candidate talking about single-payer healthcare,” said Revo, 29, who left her job to care for her newborn daughter, Lucy, and is on Medicaid. “I have great health care now, and I want to work, but I can’t afford the out-of-pocket costs. There has to be a better way.”

“Everyone asks how we’re going to pay for these things, but no one bats an eye when we spend billions on drones to drop in Syria,” she added.

McFadden, meanwhile, was initially skeptical of Sanders. “I was going for Warren for a while,” she said.

But his formidable delegate lead helped win her over. “And he’s doing this without having anyone’s hands in his pocket,” she added.

Both acknowledged that in New York’s deep-blue bubble, it’s difficult to gauge the rest of the country. They say they were blindsided by Trump’s victory in 2016.

“We have a leader who’s embarrassing,” McFadden said. “Ultimately, I just don’t want it to be Trump.”

Lucy, who is 11 weeks old, started wailing at the mention of the president’s name, and the women cracked up.

The article was published at How New Yorkers Really Feel About Bernie, Mike and the Rest of the Presidential Pack

THE CITY
More from PoliticsMore posts in Politics »