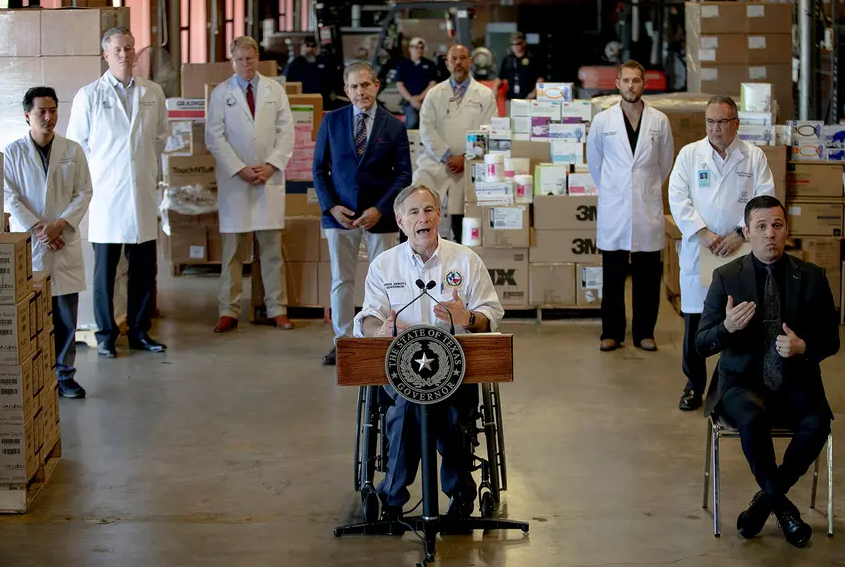 Greg Abbott and the policy contradiction of an anti-mandate mandate

The governor of Texas is mandating against mandates — resuming the kinds of top-down restrictions on private businesses that got him in trouble with a Dallas hair salon owner in 2020.

You remember the Shelley Luther episode, don’t you? The owner of a hair salon in Dallas, Luther defied Gov. Greg Abbott’s orders to shut down some businesses and operate others at reduced capacity to force the kind of social distancing that would slow the spread of coronavirus.

She got arrested. Lt. Gov. Dan Patrick offered to pay her jail fines. Abbott backed down, blaming the judge who was enforcing the governor’s order. Luther turned all of the attention into a failed campaign for a state Senate seat.

The most important part? She forced Abbott to back down from his first set of COVID-19 mandates and painted him and others as full-fledged members of the “Austin swamp.”

Since then, Abbott has swung to the right. He’s so overwhelmed by politics that he’s become a Random Policy Generator, throwing out edicts that make sense only if you forget everything he said before.

Last time he tried statewide mandates, Abbott was trying to stop the coronavirus by requiring masks and social distancing, including restrictions on crowds in restaurants and other businesses. Now he’s against COVID-19 protections, trying to prevent businesses from requiring vaccinations. The federal government is requiring some vaccinations.

Pity the rest of us, stuck between the emphatic do-be-this and don’t-be-that from our government leaders.

Texas already certified its 2020 election results. The secretary of state’s office blessed it. But Trump, who beat Joe Biden in Texas, pressed for audits, so the governor ordered “audits” in four counties and asked legislators to make it law. Pressed by Patrick, and then Trump, to increase penalties for election fraud, Abbott added that to the legislative agenda. That last one was curious; that penalty was lowered by the Legislature earlier this year and signed into law by the governor. Local election officials, meanwhile, say all of this is unnecessary and that the Texas elections were clean.

This is straight-up schoolyard politics. Trump is a bully. Patrick is egging him on. Abbott is the target, doing everything they want to avoid an electoral wedgie.

Since Luther scared him out of his previous position, Abbott has tried to position himself as anti-mandate, as an official who doesn’t believe private businesses need to be told what to do. He said so explicitly when he issued an executive order in July: “The new Executive Order emphasizes that the path forward relies on personal responsibility rather than government mandates. Texans have mastered the safe practices that help to prevent and avoid the spread of COVID-19. They have the individual right and responsibility to decide for themselves and their children whether they will wear masks, open their businesses, and engage in leisure activities. Vaccines, which remain in abundant supply, are the most effective defense against the virus, and they will always remain voluntary — never forced — in the State of Texas.”

Now there’s a new executive order that tosses aside some of that “decide for themselves” business.

Abbott wanted a show of strength here, but settled for a sign of weakness. He didn’t hold his ground, instead caving in to demands from conservatives like former state Sen. Don Huffines of Dallas, who’s challenging the governor in next year’s party primary. Huffines is trying to label Abbott a moderate and himself as a Trump-style Republican — what he calls in his advertising “an actual Republican.” Trump has already endorsed Abbott, but that’s not necessarily his final answer: The former president has shown a willingness to change his preferences in other campaigns.

In terms of his political chances, Huffines is more light breeze than hurricane. But like his former superior in the state Senate, Patrick, he’s a conduit for Trumphobia — a contagious affliction marked by its conservative victims’ obsession with the goodwill of the former president and of the multitude of voters devoted to him. Abbott has no reason to fear Huffines, but the idea of getting on the former president’s naughty list gives him the shivers.

He’s not alone in that. Dozens of other Republicans have fallen into this particular personality cult. Abbott is seeking reelection next year amid talk that he — like a small mob of other Republican wannabes — might be contending for president in 2024.