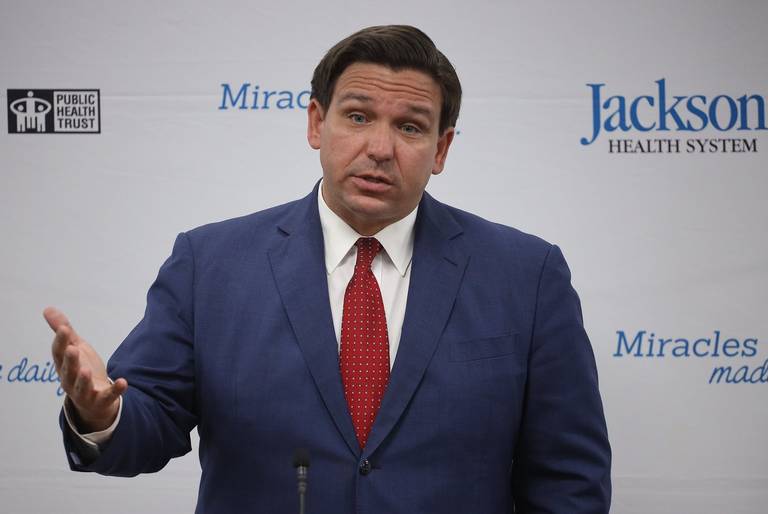 When gubernatorial candidates are half the people in the room, Florida Cabinet decisions can become the stuff campaigns are made of.

Two 2022 campaign issues may have surfaced Tuesday when Republican incumbent Gov. Ron DeSantis clashed with Florida Agriculture Commissioner Nikki Fried, a Democratic challenger for his job, on a proposed toll road and on appointing the next state Department of Environmental Protection (DEP) secretary.

DEP Secretary Noah Valenstein, stepping down June 4, was appointed by DeSantis in 2017 with the Cabinet’s approval.

During Tuesday’s Cabinet meeting, Fried asked DeSantis, “Just wondering where we are in getting a (DEP) nominee in front of us to confirm or deny?”

“It’s an executive appointment, and so that’s our prerogative,” DeSantis replied, “and we will do it when we want to, and we’ll let folks know about it.”

He said the state Constitution does not require the Cabinet confirm gubernatorial appointments but “says either the Cabinet or the Legislature, the Senate.”

“The statute said both,” DeSantis continued, “but there’s an argument it conflicts and that it would be one or the other. My sense would be the Legislature would retain their authority rather than give the Cabinet authority, so that would be a live issue potentially, if we end up with a conflict.”

The governor based his interpretation on state law regarding executive departments, which reads: “When provided by law, confirmation by the Senate or the approval of three members of the Cabinet shall be required for appointment to or removal from any designated statutory office.”

But Florida Statute 20.255(1) states the DEP secretary “shall be appointed by the Governor, with the concurrence of three members of the Cabinet. The secretary shall be confirmed by the Florida Senate.”

“The law is very clear – three Cabinet members must agree with the governor’s appointment, in addition to confirmation by the Florida Senate,” Fried said a post-meeting statement. “The governor is obligated to follow the law – but it’s also clear he will use our laws to punish anyone with whom he disagrees.”

The Cabinet voted 3-1 to allow Miami-Dade County to apply for permits from state agencies for the proposed 14-mile Kendall Parkway extension.

The Miami-Dade County Commission in 2018 allowed the proposed Kendall Parkway to be built beyond the county’s Urban Development Boundary (UDB), which shields Bird Drive Basin and Pennsuco wetlands and drinking water sources from encroachment.

“It’s not like this is going to happen. I mean they’ve got to go through all those environmental reviews,’’ he said, adding he doubts the South Florida Water Management District will approve it.

Fried said the Cabinet “sided today with developers” on a project that “will harm Everglades restoration and risk wildlife, agricultural lands, and Miami-Dade’s water supply while not adequately reducing urban sprawl.”

“It’s really disappointing the governor and Cabinet have voted like that, contradicting all their Everglades leadership,” Tropical Audubon Executive Director Paola Ferreira said.