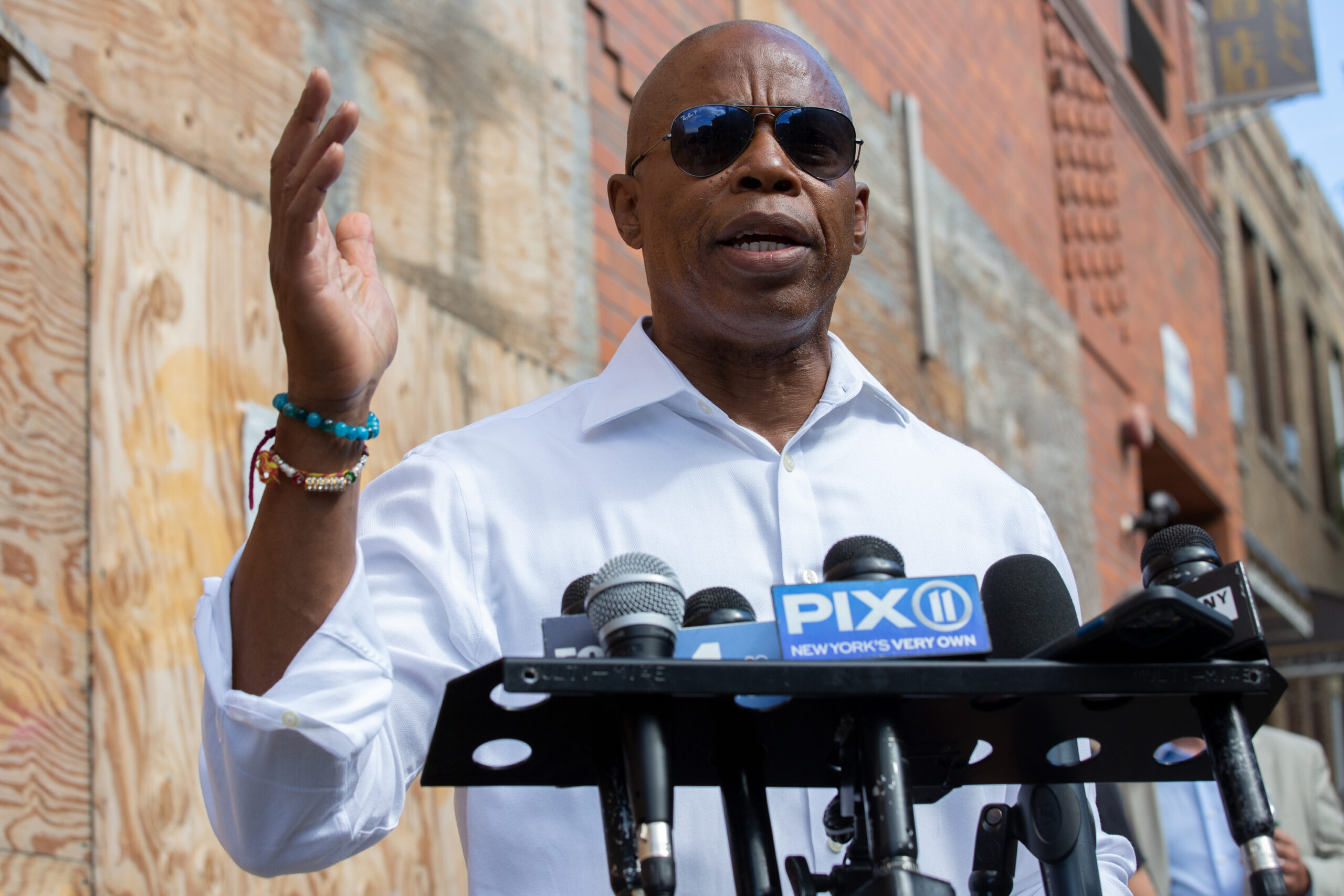 On Friday morning, Democratic mayoral nominee Eric Adams stood before the press in Coney Island, presenting his resiliency plan — which includes bringing illegal basement apartments “into compliance with city codes and regulations to ensure the safety of residents.”

At the same time, Department of Buildings Inspector Badge No. 2701 was knocking on doors and ringing bells a few miles away at a townhouse Adams owns in Bedford-Stuyvesant. The department was trying, once again, to investigate an allegation of an illegally converted apartment in the Lafayette Avenue building.

But just as in the previous buildings department visit to that address on the same complaint back in early August, no one responded to the knocks or the ringing. And so once again, a notice advising the owner to call the Department of Buildings immediately to arrange a proper inspection went up on the door.

“FAILURE TO COMPLY WITH THIS NOTICE MAY RESULT IN THE DEPARTMENT OBTAINING AN ACCESS WARRANT AUTHORIZING THE INSPECTION OF THE PREMISES,” the notice warned in all-caps and boldface.

As of Tuesday morning, department officials said they had not yet received a response from Adams. By late Tuesday, they said Adams had left a message that they’d returned and an inspection had been scheduled. They declined to say when the inspection would take place.

The notice inspectors twice placed on Adams’ door provides “direct phone numbers to the DOB unit which attempted to make the inspection, and a request for the building owner/tenants/occupants to call us to schedule a new date for a reinspection,” Andrew Rudansky, a DOB spokesperson, wrote.

On Tuesday, Evan Thies, an Adams campaign spokesperson, said the mayoral frontrunner did not dial that number, but rather another number “DOB asks all New Yorkers to call.”

Thies did not provide that number, but said Adams called it twice — once on Sept. 20 after THE CITY first reported about DOB’s inspection attempt and again Tuesday morning. He said Adams left messages regarding the DOB inspection efforts.

Thies pointed to statements by a Twitter user who opposes Adams’ candidacy and claims to have filed the initial allegation about an illegal conversion at the Lafayette Ave. address. The spokesperson called the accusation “bogus and malicious.”

Adams recently took on the issue of illegal apartments after the flooding wrought by remnants of Hurricane Ida caused the deaths of nearly a dozen people in basement units in Queens and Brooklyn.

On Sept. 19, after THE CITY reported that Adams had not responded to the warning notice DOB inspectors put up on his property Aug. 5, he promised he would reach out to the department to arrange a proper inspection.

But DOB, as of Tuesday morning, had no record of Adams contacting the department. By the end of last week, DOB sent inspectors to the townhouse to try and resolve their initial investigation of a complaint filed in July, according to department officials.

This time, they put the notice on the “front entry door,” records posted online Tuesday state. As of midday Tuesday, five days after the second notice went up and nine days after he promised to call DOB, officials said they had yet to hear from Adams. After inquiries to Adams’ campaign by THE CITY, DOB reported having heard from the candidate.

Friday marked the fourth time building inspectors have visited the Lafayette Avenue building to investigate an allegation of an illegal apartment there. The first time came in 2017 when Adams was running for reelection as borough president, long before he launched his mayoral campaign.

In July of that year, DOB inspectors visited twice, slapped up warning notices both times and never heard from Adams. The question of illegal conversion was never resolved.

Last week, Adams said he never saw the notice put up last month, adding: “We have a history of people removing notices, people taking mail out of the box — there’s been an ongoing history.”

“So yes, I’m going to reach out to the Department of Buildings and resolve the issue, whatever it is,” he added.

When Adams bought the building from the federal government in 2003, the brick townhouse was listed on the deed as having three units — and he called it a three-unit address on financial disclosure forms he filed when he was a state senator. It’s currently described as a four unit walk-up in city building and tax records.

Asked about the discrepancy about the number of apartments at the Lafayette Avenue address, DOB officials responded via email, “A physical inspection of the property would be required to determine how the building is occupied and whether or not there are any violating conditions present.”

In On the Ground Floor

Adams has said he’s lived there in the ground-floor apartment since 2017, and that he rents out the other units.

In June, before he won the Democratic mayoral primary, Adams led reporters on a tour of the ground-floor apartment on Lafayette Avenue after PoliticoNY raised questions about where he actually lived. He even opened the refrigerator to display the vegan dishes he prefers.

On his tax forms, Adams reported collecting $36,000 annually in rental income there in 2017, 2018 and 2019, but he wrote off enough landlord-related expenses to make that income non-taxable.

Last week, Adams admitted to THE CITY that amendments he’d filed with the IRS in May mistakenly neglected to mention that he lived there. The forms, as filed, purported to write off all landlord-related expenses for the entire building — including his apartment, which is not allowed.

He blamed the error on an “incorrect decision” by his accountant, who, he said, has struggled with homelessness.

GREG B SMITH
More from PoliticsMore posts in Politics »