Please ensure Javascript is enabled for purposes of website accessibility Democrats hoped high turnout would usher in a blue wave across Texas. It didn’t. - American Daily Record Press "Enter" to skip to content

Home » Democrats hoped high turnout would usher in a blue wave across Texas. It didn’t. 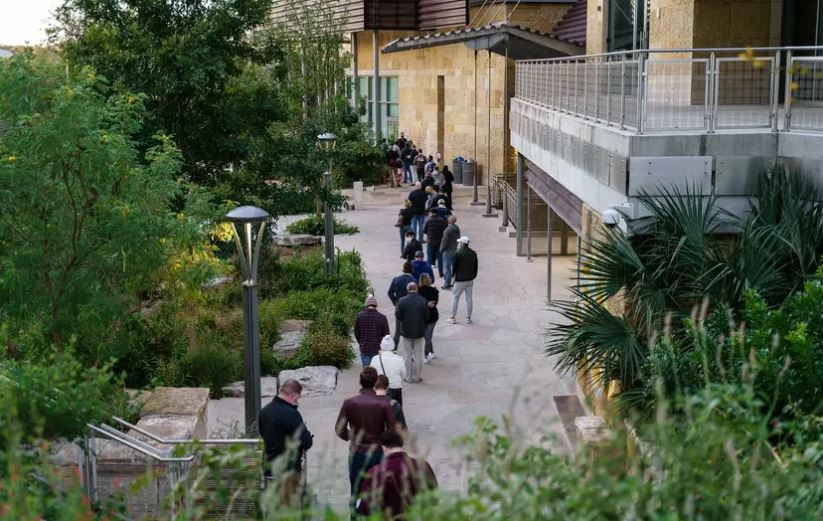 Democrats hoped high turnout would usher in a blue wave across Texas. It didn’t.

By SHANNON NAJMABADI on November 4, 2020

“Democrats hoped high turnout would usher in a blue wave across Texas. It didn’t.” was first published by The Texas Tribune, a nonprofit, nonpartisan media organization that informs Texans — and engages with them — about public policy, politics, government and statewide issues.

Democrats have said for years that Texas is a nonvoting state that could flip blue with massive voter turnout. But although the 2020 presidential election brought more turnout than Texas has seen in almost 30 years, no blue wave washed across the state.

“Texas has changed somewhat, but it hasn’t changed from its basic nature,” said longtime lobbyist Bill Miller. “The more people that vote, the more it will reflect” that.

While Democrats siphoned off historically Republican votes in some cities and suburbs, President Donald Trump won the state with roughly the same percentage of the vote that he won in 2016. A record-shattering number of voters who cast early ballots projected a fervor that did not carry over to Election Day, when just 13% of the total votes were cast at polling locations.

Civic enthusiasm and a long early voting period — extended due to the coronavirus pandemic — prompted voters to get “it over with,” said Mark Jones, a Rice University political science professor, explaining the massive early vote.

“By Election Day, Texas had effectively run out of votes,” he said.

About 66% of registered voters cast ballots this year. That made it the highest turnout election in Texas since 1992, when George H. W. Bush and the third-party candidacy of Dallas icon Ross Perot Jr. helped draw out 73% of registered voters (47.6% of the voting age population) and has since become a high-water mark for voter mobilization in the state.

“Texans will turn out to vote when they have a competitive election,” as in both 1992 and 2020, Jones said. “But when Texas mobilizes … at least in this election, it didn’t turn that much bluer.”

Statewide turnout increased by at least 6 percentage points this year compared with 2016, and virtually all of the state’s 254 counties saw turnout tick up.

Turnout also leapt in fast-growing Hays County, outside liberal Austin, which swung for Biden and saw 71.2% of registered voters turn out, an 11.7 percentage point increase from 2016.

Starr and Zapata counties, where turnout increased about 15 and 6 percentage points, respectively, from 2016, were among a predominantly Hispanic swath along the U.S.-Mexico border that brought some of the worst returns of the night for Biden. In rural Starr, 51.3% of voters cast ballots — with 47% voting for Trump, compared with 19% in 2016. Biden lost Zapata, a county presidential contender Hillary Clinton won with a 33-point margin in 2016, and where former President Barack Obama garnered a 43-point margin in 2012.

Biden won Tuesday with smaller-than-expected cushions in other border counties like Hidalgo, where he got under 60% of the vote compared with the roughly 70% Clinton received in 2016.

Turnout in several border counties was lower than in the state overall, and the region has returned diminishing results for previous Democratic stars like Wendy Davis or Beto O’Rourke.

Renée Cross, senior director of the University of Houston’s Hobby School of Public Affairs, said the increase in turnout statewide was “pretty major” considering the state’s “problem has always been that folks just don’t vote.” The polarization of national politics and a potentially backfired effort to limit voter access to the polls — making “people even more determined to turn out” — could have been among the factors that contributed to an increase, she said.

“He didn’t get that same type of passion and that same type of energy,” Cross said. “A lot of people voted for him because he was not Trump, and normally, if you have that type of dynamic, we’re not going to get as high level turnout.”

Brandon Rottinghaus, a political science professor at the University of Houston, said growth in the turnout rate was “strong but not stellar,” with a sizable portion of the electorate still sitting the process out. The turnout among Latino voters was relatively flat, he said, and the number of new younger voters was not high enough to substantially help left-leaning candidates.

“That is a problem for Democrats who hoped to harness the Latino vote,” he said. “Ultimately, high turnout is good, but Democrats need a port to dock their boat, and they didn’t have it.”

Progressive activists and the state’s Democratic Party have touted the gains their candidates made, saying “we have marched forward in Texas” even though they “came up short” on some fronts, including failing to flip the state House by winning nine seats.

“Any pundit who claims ‘Democrats lost Texas’ can’t see the forest for the trees,” said Texas Democratic Party Chair Gilberto Hinojosa. “We have been making ground year, after year, after year, because we have been fighting for this. Every newly registered, first-time young voter will be even more prepared to vote in the next election.”

Derek Ryan, a Republican consultant and voter data analyst, had predicted 12 million people would vote in Texas, and some 11 million did — most of them by mail or during the lengthy early voting period instead of on Election Day. Increased turnout wasn’t necessarily a boon for Democrats, he said — citing the fact that Trump earned a similar share of the vote in 2016 and 2020, according to his analysis. Although Biden received 3% more of the vote than Clinton had, he said, some of that could be attributed to higher-profile third-party candidates that took 4% of the vote in 2016.

“In 2020, you had nearly-non-[existent] third party candidates and they only managed to combined for 1.4%,” he said in an email.

This article was originally published on Democrats hoped high turnout would usher in a blue wave across Texas. It didn’t.