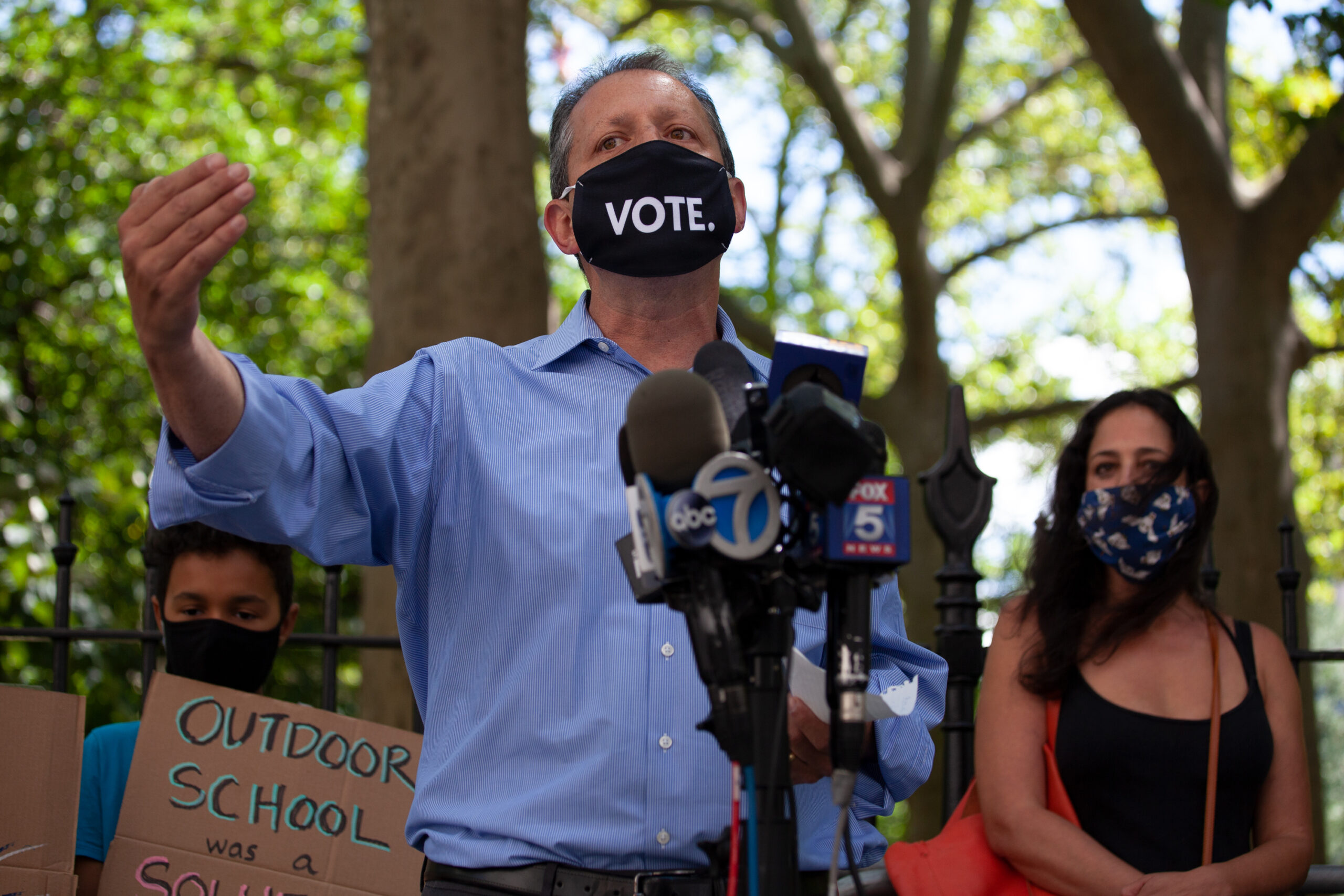 Comptroller candidate Brad Lander’s campaign staff formed a union — the first of the city’s election season — and secured a contract this week, notching some workplace protections and giving their boss an opportunity to tout his progressive values.

The staff worked with the Campaign Workers Guild to create and ratify the contract, which includes a $4,000 monthly salary floor for full-time workers, paid sick leave, no terminations without just cause, and a monthly $500 health insurance benefit, among other provisions.

They also got paid time off to vote.

“People come into politics for really aspirational reasons, and it’s important that candidates and people working on their behalf don’t take advantage of that,” said Ricky Da Costa, the political director of Lander’s campaign and a member of the new union. “Politics has been an arena that’s rife with people abusing their employees because there’s this natural power imbalance.”

While Lander agreed to some of the provisions even before campaign staff officially came on board, the contract codifies the measures and adds more — including a 4% raise for all and a month’s worth of severance pay at the conclusion of the campaign, win or lose.

There’s no guarantee of jobs through November in the event Lander wins the June 22 primary. He’s one of 10 Democratic candidates running for comptroller, and is polling behind City Council Speaker Corey Johnson.

There are eight staff members in the bargaining unit. While it’s small, the campaign workers hope their example will pave the way for similar efforts in New York City politics.

Lander is championing that: The Brooklyn Democratic City Councilmember said he’s “thrilled” for his staff.

In looking to secure workplace protections, Da Costa and his colleagues had at the top of their minds not only “shady” occurrences from past campaigns they’d heard about, like retaliation, but also the 2020 presidential campaign of Mike Bloomberg.

The billionaire former New York City mayor reportedly promised his well-paid staff jobs through the general election even if he quit the race — but left hundreds in the cold after he dropped out last March.

Staffers were only paid to the end of that month and were offered a chance to keep their work-issued electronic devices, on which they’d have to pay taxes. Some later sued.

“We know that regardless of the outcome of the election,” Da Costa said, “we’re going to be taken care of in the ways that we’ve negotiated for.”

Achieving a commitment to severance at the end of the campaign takes the pressure off employees who understand the nature of the temporary job, but won’t need to scramble for their next opportunity as the race winds to a close.

“We could put all of our efforts into the job, which is something we all wanted, but felt like we needed to know that we were going to be paid for a month afterwards to make that happen,” said MaryKatherine Michiels-Kibler, the fundraising director. “It will absolutely help [Lander] because happy workers will work harder, and they’re more excited about coming to work every day when they feel empowered.”

Included in the contract are caps on the hours staffers can work in a week — a provision that gives insight into the grueling, nonstop nature of campaign work.

The contract specifies staffers may work no more than 55 hours and are entitled to one day off per week until June 6, at which point they will work up to 65 hours a week for seven days and are allowed one six-hour period of time off.

The schedule accounts for ratcheting up the campaign as get-out-the-vote efforts kick into gear — a period in which staffers work around the clock. The effort has only become more intense with the advent of early voting, which starts June 12, 10 days before the citywide primary.

The union effort also addresses a structural problem: people from economically disadvantaged backgrounds being discouraged from working on political campaigns.

“It’s work that is sort of reserved for people with the privilege necessary to work those long hours and take that low pay,” said Ian Brady, the Campaign Workers Guild representative for the bargaining unit. “We’re looking to a future in which that is no longer the case, and in which these candidates are walking the walk as it pertains to workers’ rights.”

By all accounts, Lander and his campaign manager made it easy for the campaign staff to unionize, handily recognizing them and working with the Campaign Finance Board to document the updated employee payment arrangement to comply with the city’s public matching-funds program.

Lander, whose union endorsements include Communications Workers of America District 1, UAW Region 9A, and Teamsters Local 202, also benefits from the deal, boosting his profile as a friend of labor.

“I try to operate in ways that are consistent with my values,” he said. “You want to do that in all the places you can, and campaigns should be places where that’s true because you’re working together for a shared vision of, in this case, a more just city, and bringing those values into the campaign itself is the right thing to do.”

Lander added he’s worked to foster positive environments on his teams, but “workers need a voice, need a space to organize and build power.”

Michiels-Kibler said that the union effort allowed the staff to clarify and apply to themselves “the values we were advocating for on behalf of Brad.”

While Lander’s staff are the first 2021 city municipal campaign to unionize and ratify a contract, they’re part of a national trend: The campaign staffs of President Joe Biden and Sens. Elizabeth Warren and Bernie Sanders all unionized during the 2020 election.

Rep. Alexandria Ocasio-Cortez’s staff did, too. In all those cases, the staff secured contracts. Both Warren and Ocasio-Cortez have endorsed Lander.

Some of Lander’s campaign staff was also involved in another organized labor effort in their capacity working for City Council when about 400 employees looked to secure union recognition last year.

Last December, Johnson, Lander’s rival in the comptroller race, voluntarily recognized a sector of the union. Last month, the City Council passed a resolution that paves the way for Johnson to recognize the rest of the workers, too.

“I’m proud of my support from organized labor and working people,” Johnson said in a statement issued by a campaign spokesperson. “If my campaign staff decided to unionize, I would certainly recognize them.