Home » City Elections Could Become a Ranking Game of Thrones 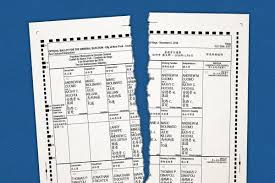 City Elections Could Become a Ranking Game of Thrones

Forget about one-candidate, one-vote: New Yorkers would get to rank contenders in order of preference on their ballots, under a proposed election overhaul.

The Charter Revision Commission’s preliminary staff report — obtained by THE CITY — eyes bringing so-called Ranked Choice Voting to town. Among the goals: to end costly primary runoffs in major elections and to avoid winners squeaking through with anemic pluralities in packed races.

But the sea-changing suggestion in the document — likely a blueprint for the final recommendations issued by the 15-member commission — is its call to study reinventing the way New Yorkers vote.

At least 17 jurisdictions in the country — perhaps most famously Maine — already use some form of Ranked Choice Voting, the draft report noted.

New Yorkers would have the opportunity to vote on the potential election-shaker, via a November referendum, should the Charter Revision Commission put the issue on the ballot.

The commission report secured by THE CITY noted the traditional election system can bring “odd results” — including cases where no one garners a majority of votes.

In major race primaries, there’s a runoff between the two top vote-getters if no one notches at least 40% of ballots. The 2013 public advocate showdown between Letitia James and Daniel Squadron costs taxpayers $13 million in today’s dollars — or about three times the office’s budget.

Then there was the recent public advocate special election that drew 17 candidates – including Jumaane Williams, who won with a little over 33% of ballots cast.

With Ranked Choice Voting (RCV), voters would rank candidates in order of preference, as the name suggests. But the math can get a little complicated:

• If no one wins a majority, the candidate ranked first on the least number of ballots would be eliminated.

• The vote cast for that candidate would be transferred to the next-ranked candidate on a given voter’s ballot.

• If that doesn’t catapult someone to majority vote-getter, the process would repeat until there’s a winner.

The commission staff suggested RCV be studied, arguing it would increase chances of voter will being reflected — and bring more “civility” to campaigns because it would be in candidates’ interest to build broad coalitions.

The report also suggested a ranked-voting system could be an antidote to voter apathy in a city where turnout for major elections has ranged from 35% to 61% over the past decade, city Board of Elections records show.

But key details would need to be worked out, including: what types of elections would be covered under RCV, when it should be enacted, whether the runoff system will remain in place if no candidate gets 40% of the vote, and how many candidates a voter can rank on the ballot.

The new voting system was among about two dozen proposals floated in the staff document. Also high on the agenda: Revisiting the makeup of the city’s Civilian Complaint Review Board (CCRB), which investigates allegations of abuse against the NYPD.

The mayor currently appoints all 13 CCRB members – but five are “designated” by the Council and three are tapped by the police commissioner. The mayor has veto power over all selections.

The staff report suggests the commission examine giving the Council “true CCRB appointees,” and that the chair be jointly selected by the mayor and the Council. The document also calls for making the public advocate “responsible for designating or appointing one or more CCRB members.”

“It is important that the ‘independent civilian oversight’ body responsible for investigating and making disciplinary recommendations to the Police Commissioner not also be entirely appointed by the Mayor,” the report said.

The draft stops short of calling for all CCRB members to be elected, a proposal pushed by police reform advocates. They also have sought to give the CCRB chair final disciplinary power over cops.

Still, the report suggests additional oversight of the police commissioner, who “frequently departs” from the CCRB’s penalty recommendations, according to the Independent Panel on the Disciplinary System of the New York City Police Department.

The police commissioner would be required to “provide variance memoranda” when diverging from CCRB recommendations, according to the report.

And the CCRB would be able to recommend punishment for an officer who lies during a probe. The agency currently lets the NYPD know about alleged false statements, but the department rarely disciplines officers.

The commission staff also proposed creating a mechanism to require city officials to answer questions posed by the public advocate. That could come in the form of subpoena power. A guaranteed budget also would also serve as a protection from retaliatory cuts, the report added.

Charter commission staff recommended a set — yet to be determined — term for the Law Department chair to help depoliticize the position. The chair appointment would require sign off by the City Council, under the staff report proposal.

Other suggested changes include:

• Providing more time and an earlier opportunity for community boards and borough presidents to review and comment on land use applications before public approval process clock begins.