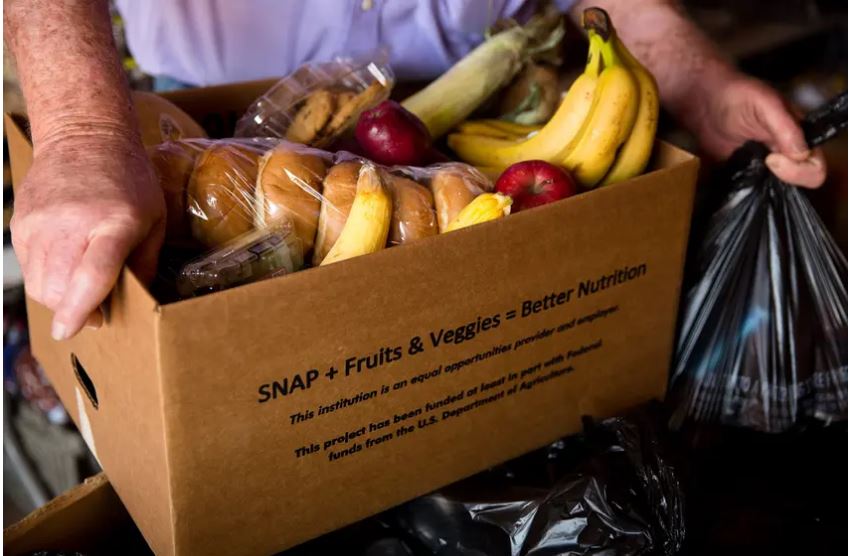 “Trump proposal could end food stamp benefits for 125,000 Texans, experts say” was first published by The Texas Tribune, a nonprofit, nonpartisan media organization that informs Texans — and engages with them — about public policy, politics, government and statewide issues.

The Trump administration is proposing tightened requirements for the Supplemental Nutrition Assistance Program — also known as food stamps — that could end food assistance for more than 3 million Americans and jeopardize assistance for thousands of Texans.

The proposed rule would curb states’ abilities to set eligibility requirements for the food assistance program that helps feed millions of Americans each month. It’s unclear exactly what the impact of the proposed changes will be in Texas, but state policy experts estimate it could kick at least 125,000 Texans off SNAP. In June, Texas distributed $383.4 million in SNAP benefits to about 1.5 million people — an average of $260 per person.

While food stamps are federally funded through the U.S. Department of Agriculture, it’s up to states to determine eligibility and distribute aid as needed. Assistance through SNAP and other federal welfare programs is usually determined by assessing income, number of household members and employment status.

The state also takes into account assets when determining eligibility. Under Texas law, SNAP participants must not own a car that costs more than $15,000. If the proposed rule from the USDA were to go into effect, no SNAP recipient would be able to own a car costing more than $4,650.

“Texas is a state where we mandate that people work full time to stay on SNAP,” said Rachel Cooper, a senior policy analyst with the Austin-based Center for Public Policy Priorities, a left-leaning think tank. “You have to work at least 30 hours a week to keep your benefits; $4,650 is not going to buy you a car that won’t strand you on the side of the road.”

According to the USDA, the proposed rule is an attempt to close a “loophole” in the SNAP program. Federal law allows states to use something called “categorical eligibility” when it comes to approving SNAP assistance. A state may automatically certify a family for food food stamps if it has already been certified for Temporary Assistance for Needy Families, which distributes cash to families with young children whose parents need assistance.

In some instances, the USDA says, families are receiving SNAP benefits because they get low-level, non-cash assistance from TANF programs without being vetted for income or asset requirements.

“Some states have expanded the use of categorical eligibility, so that many households who receive SNAP may barely participate in these other programs,” reads a report from the USDA. “They may, for example, only receive an information brochure. These kinds of ‘benefits’ often are given without determining income or assets.”

A spokeswoman for Texas Health and Human Services said the state has participated in categorical eligibility since 2002. In fall 2018, the USDA listed Texas among 42 other states that confer SNAP benefits to families receiving non-cash assistance from TANF. But TANF households applying for SNAP must meet all other program requirements such as work requirements or verifying identity.

Part of the USDA’s proposed rule change would require TANF recipients to receive at least $50 a month for six months in order to be eligible for SNAP benefits. Cooper, with the Center for Public Policy Priorities, said the organization is still trying to determine what the impact will be in Texas. Still, she said, it’s clear that this rule is an attempt to limit access to federal welfare programs.

“Food insecurity rates have not gone down in the same way that SNAP participation has dropped,” Cooper said. “People are still struggling to pay for all their fees as rents go up. People have less to spend on food. This really is one more attack on the working poor.”

Disclosure: The Center for Public Policy Priorities has been a financial supporter of The Texas Tribune, a nonprofit, nonpartisan news organization that is funded in part by donations from members, foundations and corporate sponsors. Financial supporters play no role in the Tribune’s journalism. Find a complete list of them here.

This article originally appeared in The Texas Tribune at https://www.texastribune.org/2019/07/24/what-SNAP-changes-mean-for-texas/.