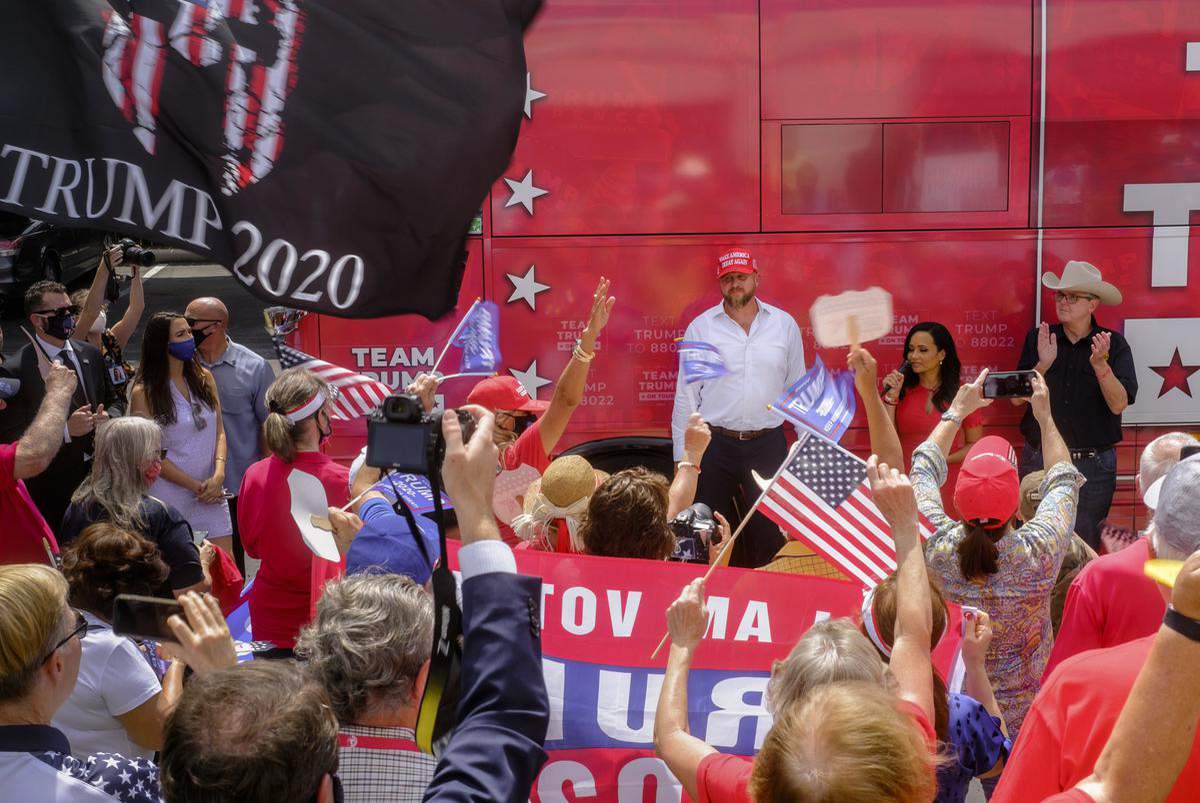 In Texas, President Trump’s team hits the road to shore up support

SAN ANTONIO — Working to shore up historically red Texas, Republican President Donald Trump’s reelection campaign launched a bus tour of the state here Thursday where Lt. Gov. Dan Patrick and other surrogates went to pains to argue they are not sweating the state this November.

“Welcome to the Trump bus tour in Texas,” Patrick said in his first remarks to reporters off the bus, before quickly volunteering: “We are absolutely 100% confident that President Donald Trump will carry Texas,” and “solidly” so.

Patrick, the chairman of Trump’s 2020 campaign in Texas, was followed by Trump campaign senior adviser Katrina Pierson, who insisted the president would “carry the state and carry it well.” Then came another senior adviser, Brad Parscale, who claimed Trump is “in a very good position for Texas” and said he laughs when people approach him with concerns about the state, noting the attention that the Democratic nominee, Joe Biden, is paying to it.

“That’s all just a little bit of smoke and mirrors,” said Parscale, who was Trump’s campaign manager earlier this election cycle. “The president’s in a clear position to win this state.”

The unsolicited confidence belied a race in Texas that has looked close for months, with poll after poll falling within the margin of error. Trump carried the state by 9 percentage points four years ago, which even then was the smallest margin of victory that a GOP nominee got in Texas since 1996.

Now, in addition to the polls, Biden’s campaign has identified Texas as a battleground state and made fall TV ad reservations here. And while it remains to be seen how much the campaign will eventually invest in the resource-intensive state, the initial overtures are nonetheless fueling Texas Democrats’ hopes that the state is on track to flip for the first time since 1976.

Patrick recently reiterated his prediction from months ago that Trump would win Texas this November by a larger margin than he did in 2016 — double digits. Speaking to the crowd here Thursday, donning a new cowboy hat after stopping at Paris Hatters in downtown San Antonio, Patrick declared that Texas “is not a swing state.” Pierson told the crowd that Trump “would blow it out in the state of Texas.

Still, the existence of a bus tour — two months out from the election, no less — seemed to speak for itself. The bus was set to make a second stop Thursday in San Antonio before heading to Granger in Central Texas and ending Friday at Bedford in North Texas. Both Granger and Bedford are in firmly competitive political territory — the former in Williamson County, which covers the suburbs north of Austin, and the latter in the sprawling suburban expanse between Dallas and Fort Worth.

Trump himself has not held a campaign rally in Texas since October, though he visited the Permian Basin in July for an ostensibly official trip that was imbued with politics as he attacked Democrats as bad for the state’s energy industry.

Asked if he would advise Trump to campaign in Texas before the election, Parscale suggested that if the president did, it would not be out of political necessity. “It’s gonna be because these are his people,” Parscale told reporters. “Texas is Trump country.”

The state’s Democrats say it strains credulity that Trump is not worried about Texas at this point, especially during the coronavirus pandemic. In polls, more Texas voters have disapproved of Trump’s pandemic response than have approved.

“As the Trump campaign conducts its last-ditch bus tour of Texas, it has never been clearer that they are on the verge of breaking,” state Democratic Party Chair Gilberto Hinojosa said in a statement. “Texans are demanding change. Texas will go to Joe Biden on November 3.”

The bus tour stop here drew several dozen Trump supporters to the sweltering parking lot in front of the local Latinos for Trump office. Parscale, who was working in web design in San Antonio before Trump plucked him from obscurity to work on his 2016 campaign, said he had forgotten how hot the city could get. Pierson also has Texas roots — she is a former Tea Party activist from Garland. And Tommy Hicks, the Dallas investor who co-chairs the Republican National Committee, was also set to participate in the bus tour, though he was not seen at the first San Antonio stop.

After the stop, one Trump-supporting couple from San Antonio said they felt good about the president’s chances in Texas, though the wife, Ann Sawyer, expressed some concern about the influx of new voters coming to Texas from blue states. Sawyer, a substitute teacher, suggested it would not hurt for Trump to drop in on the state at least once before Election Day.

“It would be nice to see him,” said Sawyer, who was decked out with a pro-Trump shirt, hat and flag. “It’s nice to the lieutenant governor and part of [Trump’s campaign] staff, but yeah, it’d be nice for him to come back again.”

The article was published at In Texas, President Trump’s team hits the road to shore up support