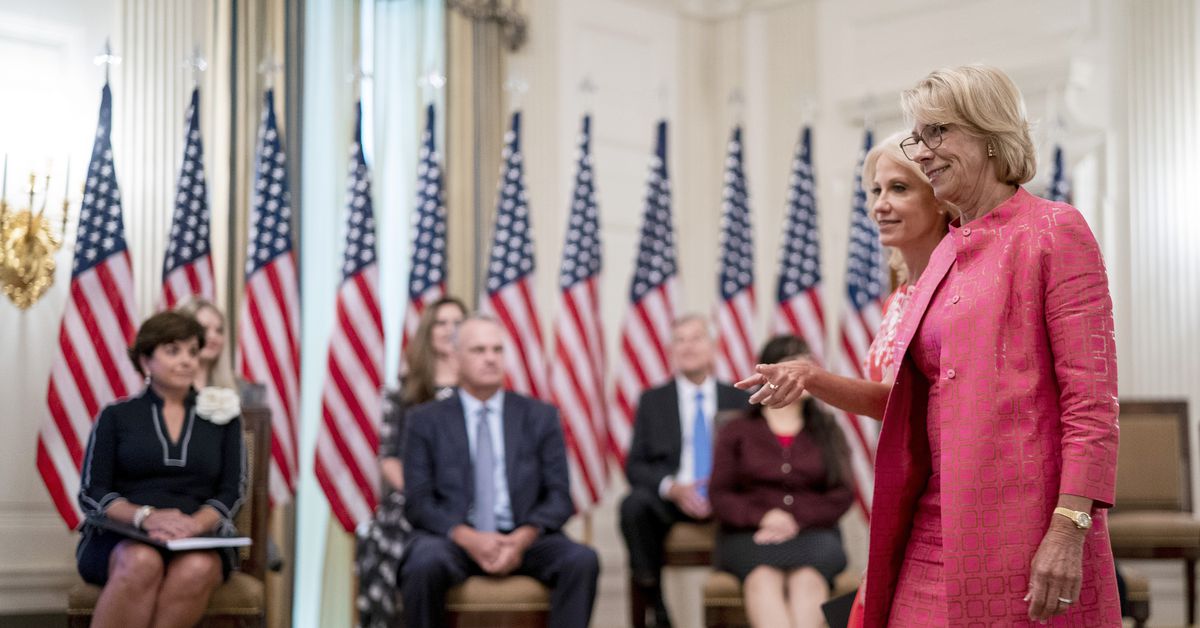 Despite setbacks, Trump administration doubles down on push to reopen school buildings

The Trump administration mounted a pressure campaign last month aimed at getting America’s schools to reopen their doors. To a large extent, it didn’t work.

Now, officials are trying again, in a move that might signal that Republican leaders are unlikely to relent in their push to tie additional school funding to physical reopening.

At a White House event Wednesday, President Trump and Education Secretary Betsy DeVos continued to make the case that schools must reopen because children benefit from in-person learning and the economy benefits from the de facto child care that schools provide. They cast opposition to reopening as driven by teachers unions, while pushing aside concerns about virus transmission.

“For students and their families, they can’t be held captive to other people’s fears or agendas,” said DeVos. “We have got to ensure that families and parents have options that are going to work for their child.”

The comments signal that President Trump continues to see school reopening as key to the country’s, and perhaps his electoral, fortunes. But it’s unclear whether he will find any more success. Most of the country’s largest districts are starting the year virtually, and most parents, teachers, and voters are skeptical of the push to reopen school buildings — even as many worry about child care and the ability of students with disabilities, among others, to get the support they need at home.

The administration’s messaging has contributed to a deep political polarization on the issue of reopening, a divide that may have affected which districts reopen buildings. A Brookings Institution analysis found that schools were more likely to open for in-person instruction in areas where Trump got more votes.

At Wednesday’s event, a mom from Fairfax County, Virginia discussed the challenges of remote learning and her decision to shift to “pod” homeschooling. An education researcher said that closed schools will mean lost learning that follows students into adulthood. A special education teacher with asthma said she felt safe returning to schools with her district’s safety protocols.

Experts don’t disagree that students face substantial harm from school building closures — in terms of learning loss and even things like missed reports of child maltreatment — and so does the broader economy. Younger children also appear less likely to contract or spread the virus.

But the evidence is mixed and still developing regarding older children’s ability to spread the virus, and the role of schools in spreading the virus in a community. Many health officials have warned against opening schools while there is widespread transmission in the surrounding community — which describes conditions in much of the South and West. A few schools that reopened have already closed after students or teachers tested positive for the virus.

Making matters more challenging, many school officials say they don’t have the money to comply with certain safety recommendations, including those around social distancing.

Whether schools will get additional financial help remains to be seen. Talks between Democrats and Republicans on an additional relief package broke down last week.

At Wednesday’s event, Trump reiterated his argument that schools that reopen shouldn’t get money from the federal government. “I would like the money to follow the student,” he said. “If the school is closed, why are we paying?”

At the same time, White House officials touted the Republican proposal to send $105 billion to schools and universities, most of which would be earmarked for schools that physically reopen. Democrats also support more money for schools, but they don’t want it tied to building policies. They also have warned that schools could face steep budget cuts if the federal government doesn’t allocate money to fill state budget holes, reportedly a key sticking point in negotiations.

On Wednesday, White House officials argued the public is on its side. “Parents overwhelmingly are saying yes when they are asked do you feel it is safe for your son or daughter to return to school,” said counselor to the president Kellyanne Conway.

“Teachers want to be back in the classroom with their kids, even if they have an underlying condition,” said Florida education commissioner Richard Corcoran, who has pushed schools in the state to reopen and has been sued by the state teachers’ union.

Polls tell a different story, though. Most parents, especially parents of color, say they prefer that schools err on the side of safety rather than push to reopen quickly. A July poll, for instance, found that 60% of parents prefer that school reopen later to reduce risk.

It’s not clear nationally what share of parents will have their kids return if schools do reopen. In New York City, data released this week show that one in four students has opted out of in-person instruction.

A recent poll also found that two-thirds of teachers want to primarily teach remotely this school year. Reflecting this, teachers’ unions have taken an increasingly skeptical view of reopening, arguing that in many parts of the country it is unsafe.

The White House event will likely do little to assuage those concerns. Two of the participants — Paul Peterson, a Harvard education professor, and Scott Atlas, a medical doctor and fellow at a conservative think tank — recently co-authored an op-ed suggesting that schools forgo many widely recommended safety precautions.

“Even in states and districts where schools are allowed to re-open, unnecessary restrictions and requirements will seriously jeopardize our children’s education,” they wrote in The Hill. “Masked teachers can hardly be effective … Repetitive sanitation and temperature-taking activities subtract from the time on educational tasks that students need … Worst of all, social distancing rules will disrupt regular, full-schedule attendance.”

Trump praised Atlas, who also appeared at the later press conference. “We’ve been working with him very closely,” he said.

Trump also said that he wants to protect teachers, and mentioned common health recommendations like encouraging people to wash their hands and assess their health before coming to schools.

The article was published at Despite setbacks, Trump administration doubles down on push to reopen school buildings