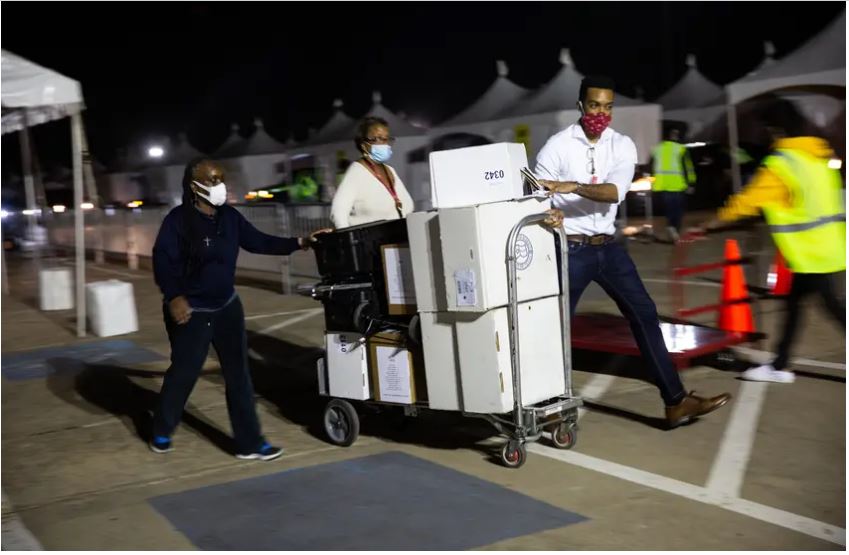 Analysis: Trust the voters and congratulate the winners, or bear the consequences

“Analysis: Trust the voters and congratulate the winners, or bear the consequences” was first published by The Texas Tribune, a nonprofit, nonpartisan media organization that informs Texans — and engages with them — about public policy, politics, government and statewide issues.

If you don’t trust the election results at the top of the ballot, there’s no reason to trust any of the rest of it, all the way down to justices of the peace, school trustees and seats on the city council.

And there’s no reason, at least officially, to pay any mind to any of the others who won in the November elections and who are now singing in harmony with the sore loser in the White House.

If those candidates won in a fraudulent election, as the president claims, they might not really be our chosen leaders. Why give them the time of day? Or the attention they seek?

That’s all ridiculous, of course, until it isn’t. And the way the questions are flying from the losing side of the presidential race, our system of choosing our leaders is under siege.

The logic is straightforward. If this election was rigged, and Donald Trump was actually the choice of the majority of the voters to be president for another four years, then maybe someone should get MJ Hegar on the phone to see if the Texas Democrat thinks she might have won the U.S. Senate race against Republican John Cornyn. She lost by more than a million votes, but how are we to know that wasn’t because some brainy teenager didn’t use an iPhone to flip the results?

Amy Clark Meachum might have some questions about her loss to Texas Supreme Court Chief Justice Nathan Hecht if the election system that put him ahead of her has been corrupted.

Trump himself beat Joe Biden by 5.8 percentage points. Are we supposed to just take that at face value?

That’s before you sort out the winners and losers in the state’s 36 U.S. House races, the 160-plus legislative races that were on the ballot, and so on.

Heck, Texas Democrats, still stinging from an across-the-board thumping Nov. 3, might be as eager for a do-over as the president seems to be.

U.S. Rep. Kay Granger, R-Fort Worth, told CNN on Friday that she’s worried about the show the president and his lawyers are putting on in the wake of Trump’s election loss. “I have great concerns about it. I think that it’s time to move on,” she said.

There’s plenty of good reason to work up a sweat here, but it’s not because the elections are crooked. It’s because the losers are trying to reverse the results by claiming that the process in place in one of the world’s biggest democracies is untrustworthy. Trump questioned the results four years ago, too, saying he had won the popular vote when the tally showed he lost it by almost 2.9 million votes. Yet during his four years in office, he suggested no repairs to the system.

If the processes we use to count votes are unreliable — as the president’s lawyers are arguing — anyone might have won. It would be like having a busted scale or speedometer: You don’t know what you weigh, how fast you’re going or who everyone else voted for in the general election.

The evidence against the people claiming results-changing fraud is overwhelmingly strong. Small-time cheats are as old as elections. But wholesale tampering is virtually nonexistent, as you can see in studies from NYU’s Brennan Center for Justice or a map of recent election fraud cases put together by the Heritage Foundation. And the federal Cybersecurity and Infrastructure Security Agency recently concluded that the 2020 general election was “the most secure in American history.”

This is a time-tested democracy that nevertheless depends on our faith in its reliability. We vote. The winners take office. Time passes and we vote again — keeping some, replacing some — in a cycle that has been going for more than 200 years. It’s got flaws, but safeguards are there to catch them. We have an inventory of people who tried to cheat because they were caught, just like bank robbers.

The system works, and the people screaming loudest about that are the ones who came up short. Voters couldn’t have turned them out, right? It must be a miscount.

If they’re able to tear down Americans’ confidence in the elections, in who won and who lost, they’ll create questions about whether the people who are supposed to be representing us are really the ones we wanted — from the top of the ballot to the bottom of it.

We hold elections to settle our fights over ideas and candidates, to end a cycle of political competition and give the winners the chance to govern — to impose some order on a chaotic world. If you can’t abide by the results, you’re stuck with the chaos.

This article originally appeared in The Texas Tribune at https://www.texastribune.org/2020/11/23/election-voters-trust/.