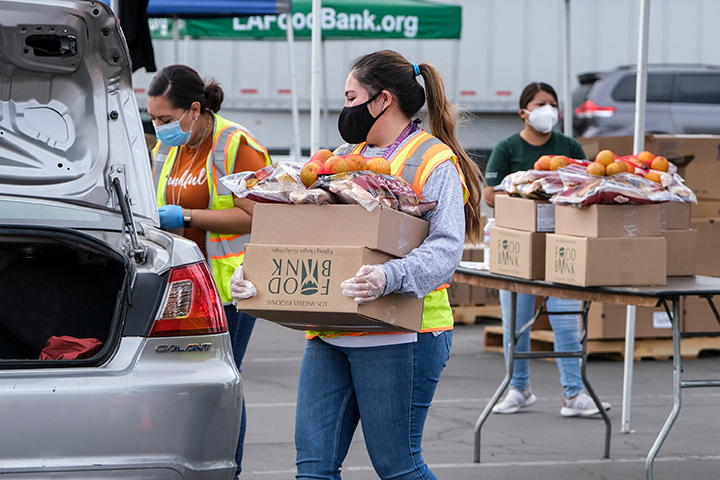 Food banks across Illinois are finding ways to deal with inflation and supply chain issues as more residents look for help.

“Yesterday we spoke to a neighbor who goes to our Roselle food pantry,” Yurko said. “She’s a single mom, and she’s trying to take care of her kids. And she said, ‘I have started coming to this food pantry because of inflation. Because the cost of buying food and gas has gotten so high, it’s even more challenging for me to take care of my kids.’”

She says a decline in food donations as well as in food from the federal government is a big reason why they’re purchasing more groceries than ever before.

“Typically, about $6 to $7 million dollars is what we would spend on food,” Yurko said. “This year we’re going to spend more than $16 million. So we need to purchase more food and right now the cost of that food is more. It’s not only more food, but it’s more expensive.”

The same inflation being seen across the country adds to the bottom line at the Northern Illinois Food Bank.

“Prior to the pandemic, when we were buying produce, we’d buy a pound of produce and it would cost us about 29 cents on average,” Yurko said. “Now we’re paying about 40 cents per pound. The impact is great on the Food Bank.”

Meanwhile, Tim Kirsininkas, public relations manager with the Central Illinois Food Bank, said the trouble can be compounded in some of the rural parts of the state.

“Two years following the pandemic, we’re seeing kind of a dual impact of grocery stores in some areas closing, forcing our rural residents to drive further to get groceries,” Kirsininkas said. “Forcing them not only to pay more at the grocery store, but also pay more at the pump to even get those groceries.”

He said they too have been battling price hikes and supply chain issues which add to the cost of providing assistance to the community.

“We’ve seen a marked increase in the cost of several products, most notably eggs, which have doubled in price,” Kirsininkas said. “That’s a nutritional staple that we always try to provide for our neighbors.”

He says adaptability has been key in overcoming supply chain issues, as they work to substitute products that can arrive more quickly or more reliably.

The Northern Illinois Food Bank distributed more than 120 million pounds of food in 2021 and officials expect that number to rise in the current year. Yurko said cash contributions allow the agency to leverage their purchasing power as much as possible.

“Even though we are having to purchase more food at a higher cost, we’re able to buy that in bulk,” Yurko said. “We have suppliers that know that we’re the food bank and give us the best possible pricing.”

She praised the community response over the past two years, even as the agency tries to protect against donor fatigue considering the prolonged period of need in the community.

“We have seen so many wonderful folks invest in our work,” Yurko said. “Folks that are able to become monthly donors or make a larger investment or a one-time gift. People see the need, they understand the need, and they want to help.”