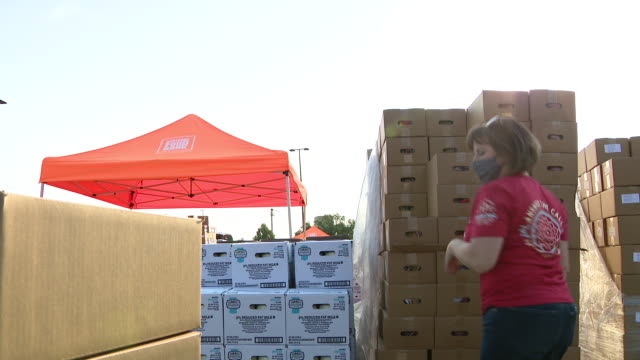 Requests for food assistance during the ongoing pandemic continue to put pressure on Illinois food banks.

Julie Yurko, president and CEO of Northern Illinois Food Bank, praised the community response over the past 18 months, but still worries about donor fatigue.

“My biggest concern is actually the food,” Yurko said. “Our donated food is down. The supply chain has been greatly disrupted. The government had stepped in and was providing more food to us, but we’re not getting nearly the level of government food that we’ve gotten over the last 18 months. And so we are concerned.”

She says government programs, many included in the American Rescue Plan Act, have had a positive impact, helping to reduce food insecurity in local communities. However, some of those assistance efforts soon are scheduled to come to an end.

“It’ll be curious to see what happens in Washington,” Yurko said. “For example, our SNAP Pandemic EBT is supposed to end on September 5th here in Illinois, and that will affect more than 850,000 of our kids. If that happens, we are ready to help those families.”

Yurko says it’s too early to determine if the advance Child Tax Credit payments, which began in July, will have an impact on demand.

Meanwhile, an announcement this week by the Biden administration means a permanent increase in food stamp assistance available to families. Starting in October, average benefits for the SNAP program will rise more than 25% above pre-pandemic levels.

Molly Delaney, vice president of development at Eastern Illinois Foodbank, shares Yurko’s concerns regarding the continued need for support for the organization’s efforts.

“I will say that we are already seeing a drop in donations in August,” Delaney said. “The need is still out there and we’re just hoping that people’s focus won’t change as we go into the months and years ahead.”

According to recent data, the Eastern Illinois Foodbank provided food to more than 350,000 people last year, a jump of about 11% from pre-pandemic levels.

“It was really kind of up and down, depending on what area people were in and the population that they serve,” Delaney said. “There was definitely an increase in people that were seeking food for the first time. We saw that about 30% of the folks that were being served with new clients.”

Eastern Illinois Foodbank serves an 18-county area covering about 14,500 square miles of the state. Over the past year, the organization has distributed 9.75 million meals to the community.

Both Yurko and Delaney agree a full recovery is years away.

“We do look at the recession of 2008,” Yurko said. “It took us three years before food insecurity returned to expected levels in our service area. We are expecting it will take two full years before the demand for food assistance returns to our pre-pandemic levels.”

She said the rural regions of Northern Illinois Food Bank’s 13-county area have been the toughest to serve, due to fewer points of distribution and a lower population density.

“We all need some help every once in a while,” Yurko said. “If someone needs some help, we have beautiful, nutritious, fresh groceries. We have over 900 feeding sites. Please come to us. We will provide you with the groceries you need for as long as you need them.”