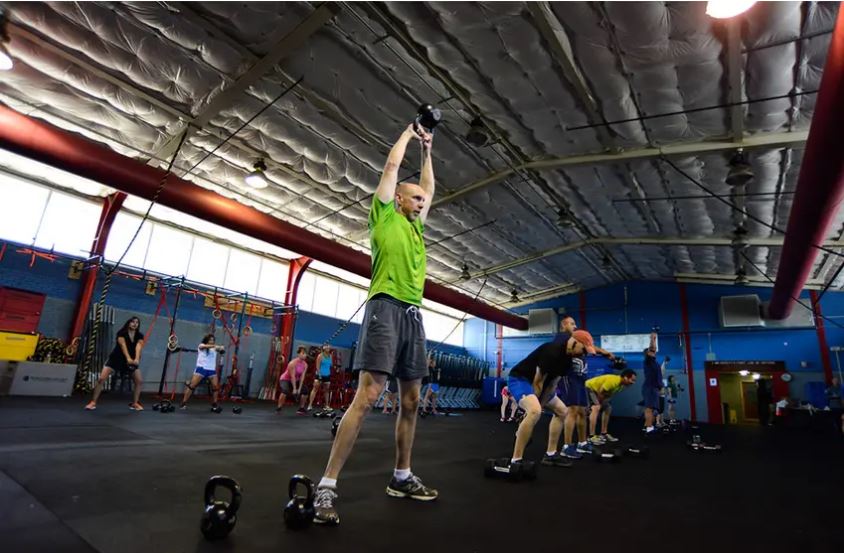 “From Desks to Dumbbells: Law Lets State Workers Find Time for Fitness” was first published by The Texas Tribune, a nonprofit, nonpartisan media organization that informs Texans — and engages with them — about public policy, politics, government and statewide issues.

About 30 employees, from driver’s license examiners to forensic scientists, filed into the gym at the Texas Department of Public Safety headquarters in Austin during lunch on Wednesday. The group spent half an hour lifting dumbbells to a heavy metal soundtrack, grunting as an instructor corrected their form.

“Today’s upper-body day,” Lt. Greg Davis of the department’s fitness and wellness unit said before turning to chide an employee who was leaving early. “You finished?”

Last month, the Department of Public Safety earned the distinction of being the “fittest large agency” in the state’s annual Get Fit Texas challenge, and employees credit the lunchtime exercise classes. Since the passage of a 2007 law giving agencies the option to offer employees up to 90 minutes a week of work time for exercise, many agencies have begun offering workout programs like hula-hooping and Zumba.

Brett Spencer, a former state wellness coordinator, said the popular programs have reduced health care costs and increased workplace productivity. A 2012 report by the Department of State Health Services, which placed third in the recent fitness competition, found that three-quarters of the agencies were taking advantage of the additional time each week.

At the Department of Aging and Disability Services, participation in lunchtime yoga and walking groups has been robust, said Holly Riley, a wellness program manager at the agency. She said incentives for employee participation, like additional leave time and better parking spots, have been especially effective.

More “avant-garde” classes, like hula-hooping, she added, could be “a little intimidating, because you’re in a public space and you’re kind of throwing yourself around there.”

Raette Hearne, who works in the state comptroller’s office, said employees at her agency attended outdoor cross-training classes hosted by the Department of Public Safety and sometimes taught classes, provided they could find space.

“We had Zumba at one time,” Hearne said. “But we got kicked out of a couple of buildings, so we couldn’t continue that.”

While participation has grown, Spencer, whose previous position was created by the 2007 law, warned that budget constraints could hinder progress. “We’ve had instances where we’ve had very engaged agencies that have had reductions in staff, for example,” he said. “That really changed their participation.”

Some of the success depends on the availability of facilities. For employees in buildings without showers, the Texas heat and the prospect of sweat-drenched work clothes are significant obstacles.

“I don’t participate in those classes in the day because I don’t want to be offensive in a meeting,” said Hearne, whose office building does not have a shower.

As the popularity of the programs among state agencies has grown, participation at the State Capitol has remained low. Employees there are “a group we don’t really have a lot of engagement with,” Spencer said.

State Rep. Eddie Lucio III, D-Brownsville, said the problem was more a lack of facilities available to Capitol staff members, not a lack of enthusiasm. During the lunch hour, he said, state employees could be seen power walking the halls of the building and its underground extension.

Lucio, who started the Capitol Wellness Club for employees to go on runs and attend cross-training classes, said the state’s failure to put showers in the Capitol is “the biggest injustice” of the major renovations performed there in the 1990s.

“I hate to admit it,” he said, “but sometimes I just put my suit back on and go back into committee, and hope that my Right Guard deodorant holds true to keeping me fresh.”

This article originally appeared in The Texas Tribune at https://www.texastribune.org/2014/05/19/time-exercise-if-not-place-shower-state-agencies/.