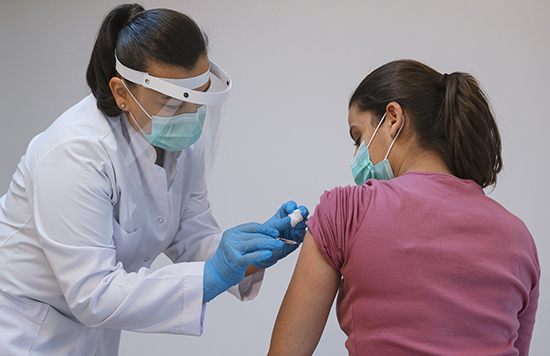 An Ohio bill that would stop employers from requiring workers to receive COVID-19 vaccinations appeared again Tuesday before the Ohio House Health Committee, a day after the U.S. Food and Drug Administration gave full approval to one of the three COVID-19 vaccines on the market.

House Bill 248 drew national attention at a hearing in June when Cleveland-area doctor Sherri Tenpenny and Joanna Overholt, who said she was a nurse practitioner, each said the COVID-19 vaccine leads to magnetism and causes metal objects to stick to the body of a person after they received the vaccine.

House Speaker Bob Cupp, R-Lima, and the Republican leadership released a statement Monday calling for the hearing, which included no amendments or votes.

“We appreciate the continued hard work of the members of the Health Committee on House Bill 248. This legislation is important to many members of this caucus. Due to the high interest in the bill, we have directed Chairman (Scott) Lipps to have one hearing, which will take place on Tuesday, August 24, with no amendments or votes,” the statement said. “We will then pause hearings on HB 248 while we work with the chairman, the bill’s sponsor, and all interested parties on this important issue.”

The committee heard from doctors, nurses, parents, priests, teachers, government officials, those who said they were harmed by vaccines and those who had benefited from vaccines in the hours-long hearing meant solely for testimony.

More than 1,000 witnesses either testified in person or submitted written testimony for or against the bill to the committee, which already had five hearings on the bill.

Those supporting the bill argued for freedom of choice. Opponents argued the state already offers a variety of opportunities to opt out of vaccines.

Rep. Jennifer Gross, R-West Chester, introduced the Vaccine Choice & Anti-Discrimination Act in what she called an effort to protect people who choose not to be vaccinated from discrimination because of vaccine status. She called the bill a freedom bill Monday.

The bill is opposed by business groups around the state, including the Ohio Chamber of Commerce and the Ohio Manufacturers’ Association, along with hospital groups, doctors and nurses. It would prevent employees from being fired for refusing to be vaccinated.

Gov. Mike DeWine has said he opposes the bill.

HB 248 also contains provisions that makes school vaccine notification to parents stronger, and it would repeal a state law that requires college students to disclose whether they have been vaccinated against hepatitis B and meningitis. The bill does not end current vaccine requirements for schools.

The House continues to be in recess until Sept. 14. The Health Committee returned early for the hearing.