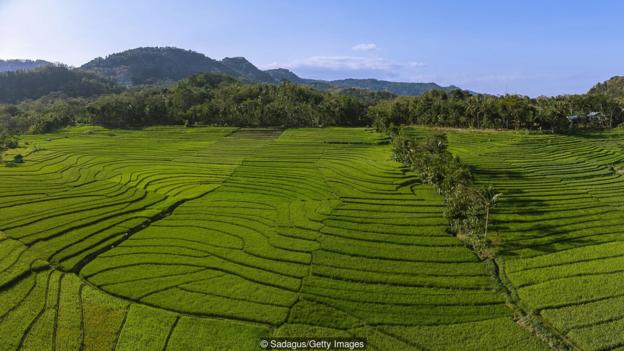 Together, more heat and more carbon dioxide may not alter quantity or nutritional quality of crops

Researchers around the world are trying to figure out ways to feed a growing population, which is estimated to reach nearly 10 billion by 2050. But as humanity struggles to increase crop yield, might nutritional quality of crops suffer?

As plant biologists, we focus a lot of attention on understanding how crops respond to environmental changes and on determining the resulting composition of plant tissues. In our most recent study, the goal was to understand how future climate conditions like higher carbon dioxide levels and warmer temperatures affect the health and nutritional qualities of a major crop both in terms of how much can be harvested and how much the mineral nutrition changes – a sort of crop report for the future.It is difficult to predict how crops will respond to future environmental conditions. Growing plants in greenhouses or growth chambers allows researchers to create any environmental condition imaginable. But plants grown this way are like caged animals; how they behave in these enclosures may not be predictive of how they behave in the wild. This challenge can be overcome by coupling traditional farming with experimental techniques to simulate future growing conditions.

For several decades, studies have consistently revealed that higher carbon dioxide levels produce higher yields of most crops. However, there are very few real-world, field experiments on major crops that examine the impact of both rising carbon dioxide and warmer temperatures.

The first major results from our work showed that experimental warming muddied an otherwise clear understanding of how plants may respond to elevated carbon dioxide. This previous work was the first to show that yields decreased when crops are grown in futuristic conditions created by boosting current temperatures by 6.3 degrees Fahrenheit (3.5 degrees Celsius) – regardless of whether the plants were grown in current carbon dioxide levels or levels increased by 50 percent, which is predicted for the year 2050.

While yield is important, so is the quality, which is a measure of mineral nutrition concentration necessary to safeguard human health. Studies have already shown rising carbon dioxide can threaten human nutrition by lowering the nutrient quality of many different crops. Once again, our experiment showed that rising temperatures complicated the higher carbon dioxide story.

Exploring how plants respond to global climate change is challenging, especially if the goal is to avoid the “caged animal” effect of artificial enclosures. Much of the research probing the relationship between plant growth and rising carbon dioxide has been done at Free Air Concentration Enrichment facilities. These facilities are designed to test how plants in the wild will respond to future carbon dioxide concentrations by adding pure carbon dioxide to the wind that blows over a crop. Our research on elevated carbon dioxide and warming effects on nutritional quality is based on a Free Air Concentration Enrichment experiment in the heart of the midwestern corn belt that used infrared heaters to warm crops to predicted temperatures in 2050 throughout the entire growing season.

Crop nutritional quality was not an original goal of the Free Air Concentration Enrichment research on future carbon dioxide and temperature levels. A chance meeting between the two of us and biochemist Steven Huber drove us to analyze the elemental content of stored soybeans from the Free Air Concentration Enrichment research. We realized that the range of our expertise, and that of a former postdoctoral researcher, Iris Köhler, who specializes in plant physiology, could reveal an important issue facing agriculture. The result: an understanding that two major global change factors – carbon dioxide and temperature – offset each other both in terms of yield quantity and quality.

Mechanisms of change in crop nutrition

The higher levels of photosynthesis in elevated carbon dioxide may lead to more carbohydrates diluting the mineral nutrients in the seeds, which would lead to a lower concentration of minerals. Plants grown in high carbon dioxide also use less water – and many minerals, like iron and zinc, move up the plant as the roots absorb water – which may result in less uptake of mineral nutrients. This could also explain a lower concentration of minerals in the harvest. Either, or both, of these ideas could explain the observed results for plants grown at high carbon dioxide.

The same mechanisms might apply with high temperature; we observed lower photosynthesis when plants are grown at high temperature, leading to the production of fewer carbohydrates. Therefore, the concentration of minerals relative to carbohydrates would be higher. The plants grown in higher temperature also experienced lower humidity, which causes the plants to use more water from the soil. This might also directly result in a higher seed mineral concentration. Whether either, both – or a completely different mechanism – is responsible for these observations will require further investigation.

What can be done to understand the mechanism behind the trade-off between temperature and carbon dioxide on seed nutritional quality?

The nutrient uptake theory can be tested with an experiment that seeks to control plant water use. If nutritional quality of soybean is dominated by how much water the plants use, then changing the carbon dioxide level and/or temperature around a plant, while maintaining constant water use in all treatments, should result in constant nutritional quality.

We are building a prototype experimental system to control humidity at our facility to test this hypothesis. If this hypothesis is not supported, then we need to move toward designing experiments to test the nutrient dilution concept.

This work focuses on one crop in one location and whether this response is restricted to soybean, or applicable to other crops, will also require further study.

There are far fewer Free Air Concentration Enrichment facilities globally than there are crop species, and even fewer Free Air Concentration Enrichment facilities that implement in-field heating capabilities. Nevertheless, the importance of maintaining a secure food supply that meets nutritional demands will ensure that the larger scientific community, us included, continues research this area.

Published in News and Nutrition