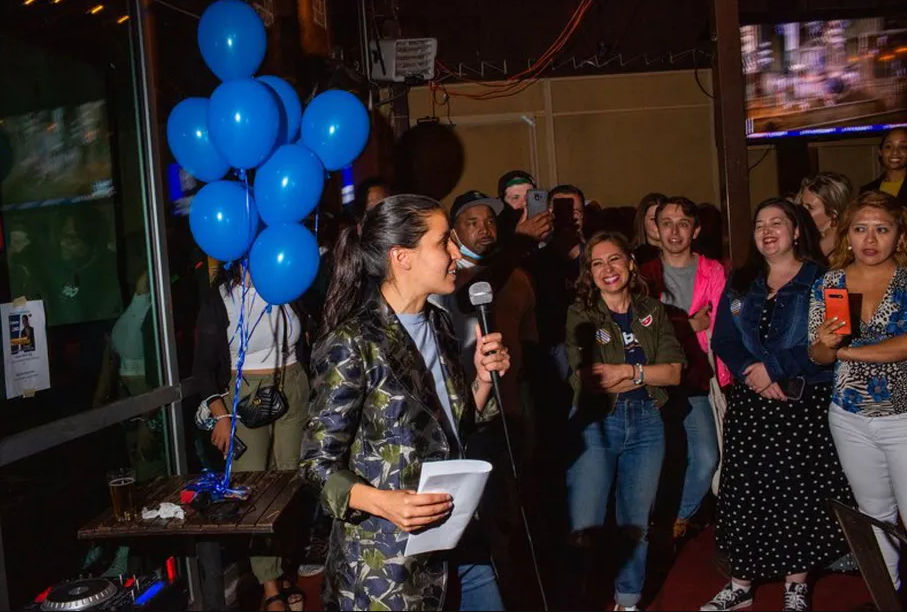 With no incumbent running for 35 of the 51 seats up for election in Tuesday’s primary, the City Council was bound to transform — and based on an early, incomplete count, its new face could be female.

Women are ahead in the count for 29 of those 35 districts — a majority of them women of color, Board of Election tallies of in-person voters’ top picks show.

The Council currently has just 14 female members. Never before in the Council’s history have women outnumbered men.

As THE CITY reported in March, women running for Council took the lead in fundraising, thanks to a powerful combination of small donations and newly increased public matching dollars.

“This is an enormous victory for everyone who worked tirelessly to make this happen,” declared the board members of 21 in ’21, a grassroots organization working to bring gender parity to the male-dominated Council.

At least one of the women will make history if the early vote counts stand after mail-in ballots are received and ranked choice votes are then tabulated, a process that is expected to extend until mid-July.

History in the Making

Shahana Hanif in Brooklyn is the likeliest candidate citywide to become the first Muslim woman in the City Council and first person of South Asian descent. In the 39th Council District, a seat currently held by comptroller candidate Brad Lander, Hanif has 32% of first place votes, trailed by Brandon West at 23%, according to the preliminary post-primary tally.

Leading with a potentially insurmountable 49% of first-place votes for the seat serving Astoria, Queens, is Tiffany Cabán, who in 2019 came close to winning the Democratic nomination for Queens district attorney as a progressive reformer.

Evie Hantzopoulos, the first-round runner up in the Council contest, received 26% of top-slot votes. If Cabán cracks 50% once absentee votes are in, she will win outright, without a ranked-choice tally.

In a victory speech Tuesday night, Cabán touted her big lead, and similar margins of some other candidates backed by progressive groups, as a wave of left-leaning legislators sweeping into office.

“We are going to have the most progressive, the most leftist, the most socialist City Council,” she told her supporters gathered at Katch, an Astoria pub, to watch primary returns.

“Make no mistake, what we did here tonight is a mandate. We have made it clear that the political will is there.”

Many Council races throughout the city will likely remain undecided until mid-July. Absentee ballots must be received and voters given an opportunity to correct certain errors before a full ranked-choice count can be performed.

All told, about 300 candidates, including roughly 150 women, campaigned for the open spots.

With the mayoral race dominated by moderate candidates such as top Tuesday first-round vote-getter Eric Adams, progressive leaders and groups concentrated energies on electing allies to the City Council. Among those making endorsements were Reps. Alexandria Ocasio-Cortez (D-Queens, The Bronx) and Jamaal Bowman (D-The Bronx, Westchester).

Other progressive candidates with leads include Jennifer Gutiérrez in Brooklyn and Marjorie Velázquez in The Bronx. They are both Latina women boosted by grassroots efforts and the union-backed Working Families Party.

Gutiérrez notched 80% of first place votes and will likely replace incumbent Antonio Reynoso, who is leading the early count to take over as Brooklyn borough president from Adams.

Velázquez is all but certain to avoid a ranked-choice voting runoff and secure victory in the 13th District, which includes City Island and Throggs Neck, after reaping 56% of the in-person first place rankings as of Wednesday afternoon. Velázquez would replace business-aligned Councilmember Mark Gjonaj, who did not seek re-election.

Former City Hall aide Pierina Sánchez holds a comfortable lead in the Council district to be vacated by term-limited Fernando Cabrera, with 39% of in-person first-place votes in the Morris Heightsca and Kingsbridge Heights district. She’s followed by Yudelka Tapia, a DC-37 leader and local district leader, who took 21% of initial first-place ballots.

In the east Bronx, Amanda Farías has just 96 more in-person, first round votes than Community Board 9 district manager William Rivera, in the race for the Parkchester seat to be vacated by Rev. Rubén Díaz Sr. when he retires at the end of this year.

Farías’ campaign manager, Christian Amato, said about 1,000 voters in the district requested absentee ballots, and that the campaign sent personal hand-written letters to all of them. He said the campaign is counting on absentee returns and ranked-choice voting tabulations of second- and third-ranked picks for Farías on voters’ ballots to win.

“We feel really confident that through RCV, we’re going to pull enough two and three votes to be victorious,” he said.

A Quest for Equity

In Queens, women have slight-first round vote leads in districts across the borough, from progressive strongholds in western Queens to traditionally moderate voting districts on the borough’s eastern side.

They include Sandra Ung in Flushing’s District 20, Felicia Singh in District 32 in Ozone Park and the Rockaways, and Linda Lee in Oakland Gardens and Douglaston’s District 23.

Singh said she’s feeling hopeful and proud about the voter turnout, noting an increase from the northern section of the district, which counts sizable Black, Hispanic and Asian communities. Representation and equity for people of color and working-class immigrants in the district is long overdue, she added.

“We set out to include people in the voting process that have never had their door knocked by someone seeking to represent them,” Singh said. “The diversity in our city, and District 32 has never been fully represented by its leadership.”