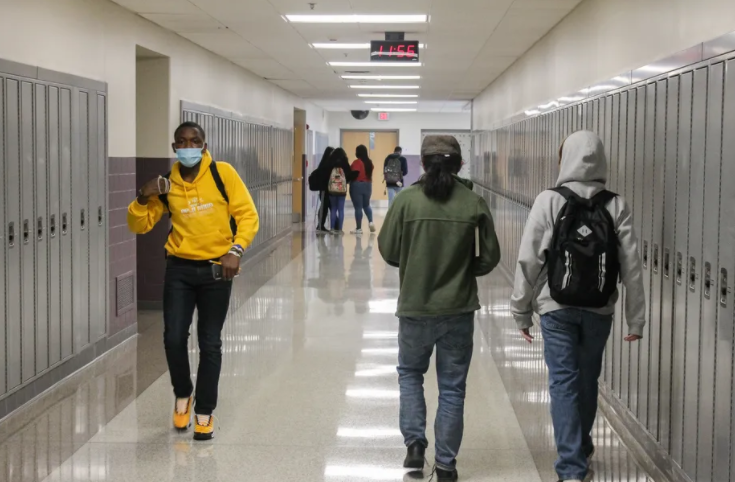 With clock ticking, no deal yet with union on Chicago high school reopening

The next 24 hours will be closely watched in Chicago as a union-imposed deadline nears for the city to reach a deal to reopen high schools.

If a deal isn’t reached by late Tuesday, teachers have said they will not report to classrooms Wednesday, even as they continue to teach remotely, harkening a previous move this past winter that brought efforts to reopen elementary schools to a temporary standstill. High school students are supposed to return April 19.

Chicago teachers’ concerns that public schools have fallen short on meeting some basic safety promises is priming the fight over a contract to reopen the city’s high schools.

Teachers on a virtual union press call Tuesday said at one school there aren’t enough janitors to use the available cleaning supplies. At others, they warned the contact tracing process is lagging, leaving days for possible COVID-19 infections to spread.

“We are looking for a safe, sanitized…process to move on, so that we can get back in the building,” said Lolita Hardiman, a teacher at York Alternative High School, which serves students who are incarcerated.

The dispute highlights the difficulty of the effort to open high schools in Chicago, where students have more complex schedules, a higher chance of catching or passing COVID-19, and, in some buildings, are returning amid hundreds of other students.

If high schools open April 19, it will be the first time some 72,000 students would have the option for in-person learning since schools closed last spring. About 35.6% of those students have said they would return.

Chicago Public Schools said in a statement that they are determined to open high school buildings as planned, and that negotiations with the union have been productive.

“We have general alignment on a set of key topics including safety protocols to keep students and staff safe and scheduling models that will be tailored to the needs of each school,” press officer Michael Passman said. “We hope to reach an agreement as soon as possible to ensure a smooth transition for our high school students and families.”

Some parents have expressed frustration with the negotiations process, and directed their ire at the union, saying they need schools open for child care support. “I work a full-time job. Act as full-time remote classroom monitor, because my kid can’t focus,” one Twitter commenter said. “Can’t leave my house, because my kids can’t be unsupervised.”

The district said 84.3% of high school teachers expected to appear in person, or 3,640 out of 4,318 teachers, came to school buildings on Monday, the first day high school educators were expected to work in-person.

The district didn’t say how many teachers had received accommodations or did not come into buildings because they failed a health screener, both of which could affect in-person teacher numbers.

On Tuesday, the second early-morning press conference this week, union officials said the main sticking points in the talks are high school class schedules, accommodations to allow some members to work remotely, and efforts to secure vaccinations for high school students and their families.

The union also wants school officials to agree that teachers who have no in-person students can work remotely, and to limit how many high schools can have students in the buildings four days a week, instead of in two groups that would return two days a week each. Some high schools with lower enrollment plan to bring back students nearly full time.

Some high school teachers who went into schools for the first time on Monday said they didn’t have the web cameras or other technology that some elementary teachers did to support teaching students in person and online simultaneously. The union has asked for a technology stipend for teachers.

“I know people are working hard on this, but we still have a ways to go,” said union President Jesse Sharkey.

This article was originally posted on With clock ticking, no deal yet with union on Chicago high school reopening