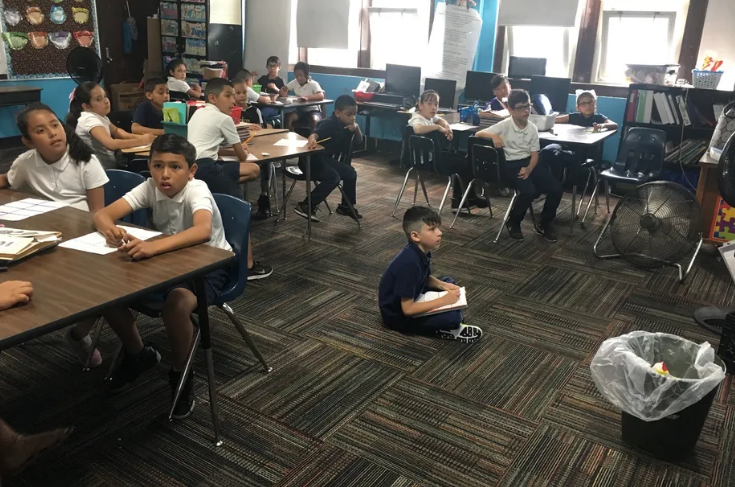 Will upgraded ventilation systems help draw Detroiters back to classrooms?

The Detroit school district invested heavily in recent months to renovate its ventilation systems in hopes of reducing the spread of COVID-19 in classrooms. The question now is whether the changes will sway wary parents and teachers in a city that has been hit especially hard by the pandemic.

Just about everyone in the city is eager for classrooms to reopen. Most students learn best in person. But teachers and parents have largely opted to stay home out of fear of COVID-19. As of last month, as many as a quarter of DPSCD students were learning in person compared with as many as half of all students statewide.

Elevated COVID-19 fears in Detroit are mostly beyond the district’s control. Large numbers of deaths in the city, combined with widespread skepticism about the vaccine, have created a culture of heightened caution around the virus.

But the district is also contending with public mistrust of its roughly 100 school buildings. While many schools across the state and nation are in poor repair, and an estimated 44% lack adequate ventilation systems, the poor condition of Detroit buildings during a lengthy period of state control gave the district’s school buildings a national reputation. While the district has invested in repairs in recent years, many Detroiters remember national headlines, teacher sick-outs, and a federal lawsuit fueled by dilapidated buildings.

That’s why the district has moved quickly to improve its infrastructure, especially elements such as ventilation that can reduce the spread of COVID-19.

“There was a lot of misinformation circling about our ventilation systems, which drives more fear about returning to schools for in-person learning and work, especially in the classroom,” Superintendent Nikolai Vitti said in an email. “People generally assume that older buildings do not meet the CDC’s ventilation system requirements, which is simply untrue.”

After an inspection by an outside firm this fall found that the district’s air filtration systems were out of date and in disrepair, the district installed new filters across the city and repaired dozens of air filters. The district made other repairs to ventilation systems in dozens of schools and increased the amount of air those systems brought in from the outside. While some older school air filtration systems can’t remove the coronavirus from the air, teachers can also request portable HEPA air filters, which can.

On the list of tools for reducing the spread of COVID-19 in schools, effective ventilation is just behind masks and vaccines, experts say.

With summer school looming and the fall semester just months away, public perception of the safety of the Detroit district’s schools will determine how quickly the district can return to a semblance of normalcy — and how soon tens of thousands of students can begin to catch up on learning missed due to the pandemic.

Jacqueline Poku, a parent of a district second grader, said she opted for remote learning for her son in recent months. She said she’s still unsure if and when she will send her child back to school and is concerned about ventilation in schools across the district.

“There are older buildings throughout the city of Detroit that have crumbling windows,” she said.  “That will be very unfair for kids to go back to a classroom with poor ventilation and then they catch something they don’t need to catch.”

In February, the Centers for Disease Control and Prevention issued new guidance on ventilation systems for schools, emphasizing that it was possible to reduce COVID-19 transmission by filtering indoor air and bringing in more air from outside. The coronavirus can float in the air when infected people breathe out; rapidly recycling indoor air reduces the chance that viral particles will accumulate in a classroom.

The district largely used federal COVID relief funds for the improvements. Officials did not respond to questions about how much money the district spent on the projects. Dozens of districts across the state have also used federal aid money to improve their indoor air quality, according to surveys submitted to the state.

Nicole Key has a third grade son at Edmonson Elementary School where she serves as PTA president. She is also an art teacher at Schulze Academy of Technology and Arts.

Key said her son’s school was in the process of buying each classroom an air purifier and that his school has a new ventilation system that was installed recently. However, she thinks the district should prioritize schools that have older systems or windows that don’t open.

“Each classroom should be able to open their windows and get that fresh air,” she said.

Christopher Godwin, a researcher who worked on indoor air quality for the University of Michigan School of Public Health, said these changes are significant, though he said some of the repairs should have been “routine.”

“All of these things will help with COVID, but they’ll also just make the indoor air in the schools in general better,” he said.

Godwin warned against putting too much emphasis on opening windows, especially at Detroit schools near industrial facilities that pollute the air. He said that open windows can interfere with ventilation systems as they pull in air from the outside and filter out harmful particles.

It remains to be seen whether the improvements will be enough to convince teachers that their classrooms are safe places to work. Under an agreement between the district and its teachers union for the 2021-22 school year, the Detroit Federation of Teachers, classroom teachers were allowed to choose whether to return to in-person teaching. Many opted to stay home. At times this spring, the district didn’t have enough teachers to work face-to-face with the students who showed up for class.

The terms of summer school, the fall semester, and teachers’ next contract are all being negotiated.

“You’re really not going to be able to see a difference until schools are fuller and you have students in them,” he said. “Hopefully [the ventilation improvements] reduce COVID transmission, but I don’t have any definite facts that speak to that.”

One measure of the effectiveness of the repairs is to measure carbon dioxide levels in fully occupied rooms. Humans exhale carbon dioxide, and too much of the chemical in the air is a sign of poor ventilation. Vitti said the district plans to conduct these tests once more people return to school buildings.

For some teachers, no amount of ventilation improvements will be enough. Ben Royal, an elementary school teacher and member of By Any Means Necessary, an activist group that has opposed classrooms opening throughout the pandemic, said he would only be satisfied with widespread vaccination of everyone in schools, including children, and mandatory testing for everyone at schools.

“Maybe it’ll slow it down, but COVID is a deadly disease, and that’s why it has to be stopped,” he said.

Vitti said he worries some Detroiters are holding the district to a higher standard of safety than districts across the state, most of which are now offering fully in-person instruction.

“We are doing everything and beyond to keep employees and students safe, much more than districts and schools that have returned nearly all of their students,” he said. “If they have been safe then so are we.”

This article was originally posted on Will upgraded ventilation systems help draw Detroiters back to classrooms?