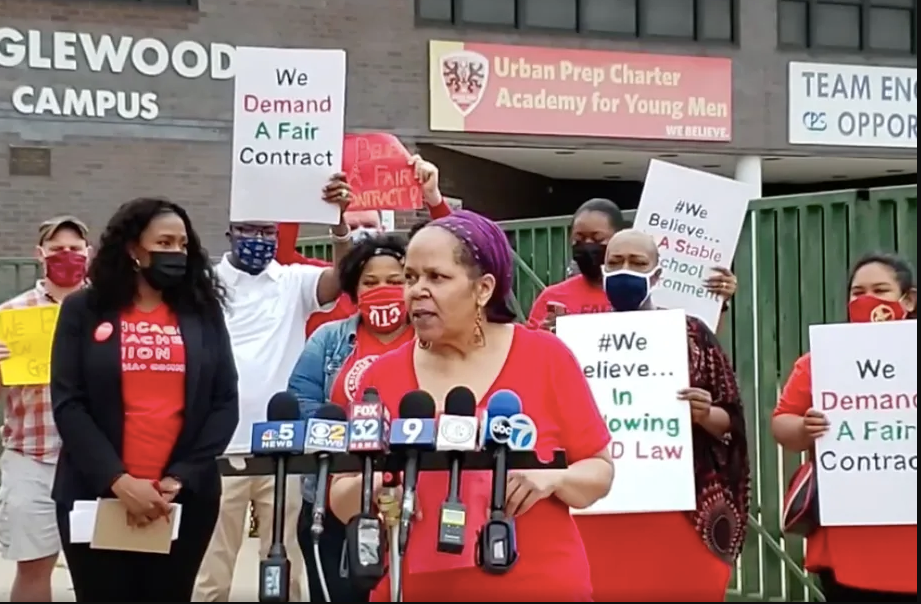 The teachers, who voted unanimously to strike in late May, said they want pay increases that would put them closer to salary schedules for district-run schools. According to the Chicago Teachers Union’s charter division, starting salaries at the network are $11,000 less than that of unionized teachers in district-run schools.

Urban Prep CEO Timothy King, who founded the school in 2005 and went on to reach national acclaim, did not immediately respond to messages seeking comment. But in a statement on Monday afternoon, Troy Boyd, the charter network’s chief operating officer, said that leadership was “disappointed” that educators chose to strike with six days left in the school year.

Management, he said, had offered retroactive raises for the previous three years and guaranteed raises through 2024 as part of a three-year contract offer, but the union was demanding a single-year contract. “That is not in the best interests of teachers, nor the students for whom we are all working,” Boyd said.

On Monday morning, striking teachers said other sticking points include job protections and more investments in special education services — at two campuses, 1 in 4 students had a learning plan for a disability in 2020, according to state data.

“We want Urban Prep to show their commitment to diverse learners,” said Shelley Aaron, a six-year veteran of the Urban Prep Englewood campus. “We need certified special education teachers in front of our diverse learners, we need resources for our students, and we need to retain special education teachers and have enough (of them) to provide students with their proper least restrictive learning environment.”

Boyd, the chief operating officer, said the district had met its “statutory responsibilities” regarding special education, while continuing to offer support to students and ongoing professional development to teachers. A Monday training session for special education teachers was canceled due to the strike, he added.

On Monday, striking teachers also decried a lack of financial transparency at the network and said they wanted to know how $3.1 million in federal Paycheck Protection Program loans issued to the operator during the coronavirus pandemic had been spent. The union’s charter division has filed an unfair labor practice complaint with the state labor board demanding more clear accounting of finances at Urban Prep.

The charter network has two campuses under city oversight and one campus under state oversight in an unusual arrangement.

That situation arose in 2018 after Chicago Public Schools tried to revoke the charter for the smallest of the three campuses, Urban Prep West. The network successfully appealed to a now-defunct independent state charter commission. Oversight has since been transferred to the Illinois State Board of Education.

Chicago Public Schools leaders at the time said they had concerns about financial management, declining enrollment, and poor academic performance. In testimony to the state commission, one district official said that 87% of students on that campus weren’t meeting college readiness benchmarks.

It’s not the only campus that has struggled. In January, Chicago Public Schools’ chief portfolio officer, Bing Howell, told the school board that he was recommending Urban Prep Englewood for a short-term, one-year renewal — but that came with a sharp warning. After two years on an academic warning list, Howell said the school demonstrated “consistently troubling performance” in three categories — academic, financial, and in operations — and that the district would terminate the Englewood campus charter in 2022 if it didn’t “cure its unacceptable performance.” Among the indicators flagged by the district: landing in the lowest quartile of growth scores among Black students on the college-entrance SAT exam.

Teachers on Monday said that they have been in contract talks with management for three years, but additional federal funding coming to schools in the wake of the coronavirus pandemic appeared to be a flashpoint.

“Funding is not hitting the classroom the way it is supposed to be,” said Ashlee Lewis, an English teacher from Urban Prep Bronzeville.

The next bargaining session with management was set for Tuesday, according to the union. The network later said it was planning to bargain Monday evening.

Considered the nation’s first all-male charter for boys, the Urban Prep network enrolls about 650 students across three campuses. It was founded on the premise that doubling down on reading and math and presenting culturally relevant curriculum would boost college enrollment rates among Black teens. The charter said in 2020 that 100% of its students had been accepted into college for the 11th straight year.

State data from the 2018-2019 school year shows that 69% of students enrolled in college, slightly higher than the district average. More recent data is not available due to the interrupted data collection statewide during the coronavirus pandemic.