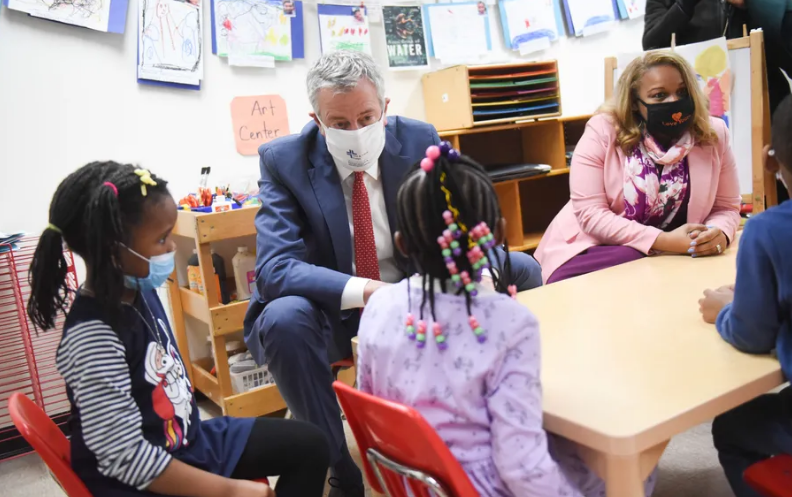 What’s happening with the 3-foot rule? Conflicting messages raise concerns about when more NYC students can return to classrooms

Left with little time or guidance, some principals have told families that plans to welcome back more students into school buildings have been put on hold, even while Mayor Bill de Blasio insists New York City is sticking to an April 26 return date.

The result has been frustration for school leaders and confusion for parents, a scenario that has played out repeatedly in the city’s back-to-school saga.

De Blasio kicked off the week announcing that roughly 51,000 students would be able to return to their classrooms April 26 after the education department gave families another chance to switch from remote-only learning to in-person instruction. In line with state and federal guidance, the influx of students would be accommodated in part by allowing some elementary schools to move from six feet of distancing between students to three feet.

Last month, the education department sent schools new capacity figures, allowing essentially double the number of children in each classroom, officials said. That change would also give more children the chance for five days a week of in-person learning.

But a series of conflicting messages in recent days cast doubt on whether some schools could increase the number of students in classrooms starting on April 26, as planned. The situation also raised questions about whether city officials had worked out key details before announcing the return date, once again forcing principals to implement a return-to-school strategy with little information.

This week, officials began explaining other logistics of moving to three feet, including how to handle lunch periods, only to quickly retract that information without explanation. (The six foot rule still applies to lunch time since children are unmasked, and the guidance leaned on the warm weather providing opportunities for outdoor eating, according to a copy that was obtained by Chalkbeat.)

Then, principals were told by their superintendents in at least two districts to pause their planning efforts and give parents a heads up that they might not be able to welcome more in-person students by April 26, according to an email from a superintendent obtained by Chalkbeat and other letters to school communities.

Over the last 48 hours, some schools began communicating that message to parents.

“We have just now received an update from the [education department] that the new 3-ft physical distancing guidelines allowed in classrooms, is on HOLD,” an assistant principal at Manhattan’s P.S. 158 wrote in a message to families on Thursday.

The school would not be able to bring in additional students until the school received additional information, the note said.

Asked directly about the confusion, de Blasio said Friday morning that he is “absolutely confident” that the 51,000 students who signed up to return to campuses will be able to do so beginning April 26.

“So what people can count on, if you’re opting back in, you’ll come in on the 26th and there will be a seat for you,” he said during a radio interview on WNYC.

Danielle Filson, an education department spokesperson, did not respond to questions about why some school leaders were told to put their plans on hold, but reiterated that there will not be a delay on implementing the three-foot rule, and additional guidance will be sent to principals next week.

Alison Gendar, a spokesperson for the city’s teachers union, did not directly comment on the status of the city’s negotiations with the union over the transition to three feet of distancing in some schools. But she said the union has worked with the education department “to make sure that school communities make the changes they need to make to accommodate all returning students in the safest way possible.”

The confusion will not affect most New York City families, as roughly 65% of them have opted for fully remote instruction. Because of the low in-person numbers, many elementary schools can still have their in-person students learning six feet apart. But some schools need the change to three feet to get more students into their buildings more often.

The back-and-forth has frustrated some school leaders who say that the education department has put them in a position with little information and with many families clamoring for clarity. The principals’ concerns are important because a similar scenario led to a delay of the start of the school year in September. Then, as now, principals insisted they needed more time to figure out the complicated logistics of how much space and staff would be needed, and how to create schedules to safely accommodate students.

“Parents believe this has been mentioned by the [Centers for Disease Control], the mayor said we’re adopting it, what’s the holdup?” said one Manhattan elementary principal, referring to questions parents are asking her.

“Here we are, it’s 10 days away, we don’t have a lot of lead time,” added the principal, who spoke on condition of anonymity because she was not authorized to speak publicly. “I have to redo all my schedules if that is the case. To leave us in this waiting stage again, it’s like a flashback to last summer,” she said, referring to last-minute and constantly changing directives from the education department.

Some parents were similarly frustrated.

By Friday morning, the education department sent a new message to principals reaffirming that all students who opted back in could begin returning to classrooms on April 26.

Information about the logistics, however, were still vague for the schools that can’t accommodate newly opted in students or increase in-person days without revamping their classrooms based on the three foot rule.

The message indicated that further guidance would not be provided to them until after April 19.

This article was originally posted on What’s happening with the 3-foot rule? Conflicting messages raise concerns about when more NYC students can return to classrooms