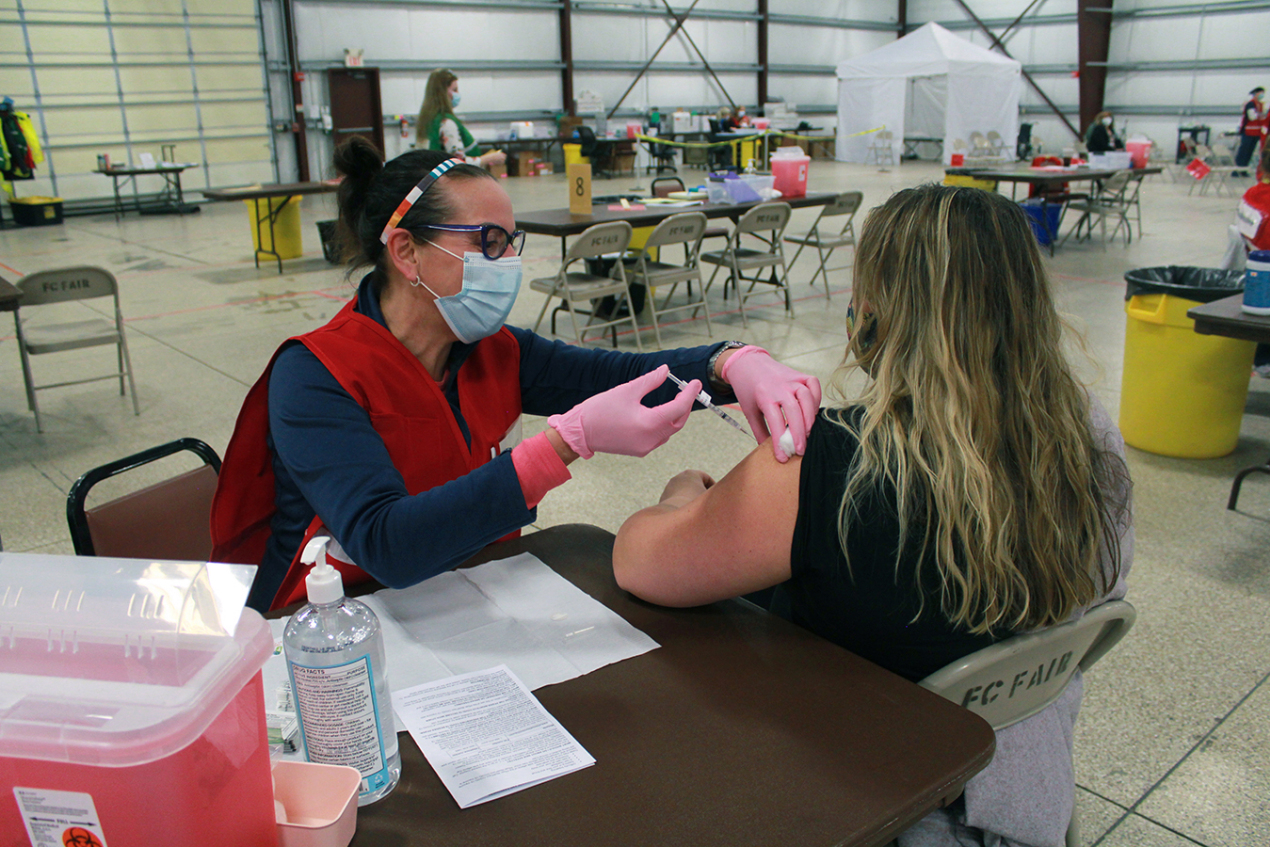 What the Slowing Vaccine Rates Mean for One Rural Montana County

So, at the start of May, the northwestern Montana county dropped its mass vaccination offerings from three to two clinics a week. Though most of those eligible in the county haven’t yet gotten a dose, during the final Thursday clinic on April 29, few cars pulled up and nurses had time to chat between patients.

“It’s a trickle,” said Flathead City-County Health Officer Joe Russell. “Not enough people will get vaccinated to reach herd immunity, not in Flathead County and maybe not in Montana.”

Daily covid vaccination rates are falling nationwide. Gaps in vaccine uptake are starting to show, especially in rural America. That leaves many communities grappling with an imperfect pandemic endgame.

Flathead stands out as one of Montana’s most populated counties to fall behind. There, 25% of people had been fully vaccinated by May 10. To compare, nearly 33% of Montanans were fully vaccinated, and that figure is closer to 35% nationwide.

Flathead County is a medical destination for the top corner of the state, a gateway to Glacier National Park and neighbor to two tribal nations. It’s Montana’s fourth-largest county by population with more than 103,000 people, yet it’s rural — 18 people per square mile. It’s also conservative, with the majority of residents voting for former President Donald Trump last year. National polling has shown rural Americans and Republicans to be among the most resistant to getting vaccines.

Russell said he hopes at least 40% of Flathead County residents eventually get the shots. That’s well below the 70% to 80% believed to be needed to create widespread protection from the pathogen that has stalled normal life.

Public health experts worry about reservoirs of the virus fueling outbreaks. That possibility further strains year-old tensions in places such as Flathead County, where strangers and family members alike can be split on whether the virus is a threat and the decision to wear a mask marks where people stand. Covid vaccines are the latest phase of that divide.

Cameron Gibbons, who lives outside Kalispell, has worried about how covid could affect her 13-year-old son. He’s had coughs turn into lung infections that landed him in the emergency room for trouble breathing, so the family has played it safe during the pandemic.

“We haven’t seen family in a long time because they haven’t chosen to be careful, which is OK, as long as when we get back to normal we can all set our differences aside,” Gibbons said. “Now there’s this judgment of ‘Oh, you got the vaccine.’”

Some of Montana’s most vaccinated places overlap with tribal nations. Chelsea Kleinmeyer, the health director of the Confederated Salish and Kootenai Tribes, said the tribes’ members seemed to largely accept vaccines after the pandemic disproportionately sickened and killed Native Americans. But the reservation crosses four counties, including Flathead.

“We travel to those counties every single day,” Kleinmeyer said. “It goes back to: Are we really protected against this virus, these variants, if we don’t achieve herd immunity?”

States are shifting from mass clinics to bringing shots to where people are, but that strategy, too, can be unpredictable. The same day of the county’s final Thursday clinic, the local health system hosted a walk-in clinic in the middle of the Flathead Valley Community College campus in Kalispell. Most of the chairs for people to wait 15 minutes post-shot remained empty and, by early afternoon, the clinic had to send 200 doses to the county health department to avoid wastage.

Although organizers had hoped to vaccinate at least 100 people that day, Audra Saranto, a registered nurse who heads Kalispell Regional Healthcare’s vaccination team, said she counts the college event as a success — 50 people got vaccines who might otherwise not have.

The health system may host similar clinics at major job sites, like for a lumber company. A mobile team will offer shots in busy places like farmers markets, even if it means risking people not following up for a second dose.

It’s not surprising that covid vaccinations aren’t universally accepted yet in this divided county. Flathead’s board of health deadlocked over mask rules and crowd size limits amid the area’s worst covid outbreaks. Two top county health officials resigned in the past year. Thousands of people have signed dueling petitions to remove or keep one board of health member who had stirred doubt over covid-19 cases and opposed mask rules.

And the city of Kalispell is home to state Sen. Keith Regier, a Republican who repeated false claims on the Senate floor last month that covid vaccines may contain microchips to track people. Regier said in an interview he was “offering caution in how we progress with this vaccination.”

Meanwhile, Whitefish, roughly a 20-minute drive from Kalispell, has maintained a mask ordinance that has outlasted the statewide mandate. Banners downtown show local leaders asking people to mask up so people can pray together and keep schools open. Even so, the rule isn’t always followed there.

At the county’s final Thursday clinic, John Calhoun, 67, undid his pearl snap shirt to get his second shot and joked with the nurse, “I’m doing this so Joe Biden doesn’t throw me in jail.”

Calhoun said he hopes being vaccinated will help him ease tensions the next time someone tells him to wear a mask. He believes covid-19 is real but doesn’t think it’s as serious as health officials claim, even though he has diabetes, a risk factor for covid complications.

“Nothing seems to bother me all that bad,” Calhoun said. “I had a horse fall on me, broke my hip, and once stabbed myself with a hunting knife. All that caused me a bit of a problem, but other stuff just doesn’t bother me.”

He decided to get the shot after an old high school friend with a degree in biochemistry told him it was important — an opinion Calhoun trusted over those of government-paid experts and liberal politicians who he said have used the pandemic to grab more power.

Calhoun said he’s still trying to talk his wife, Lola, into getting vaccinated to play it safe: “She’s one of those ladies that you don’t talk her into much.”

Lola Calhoun, 59, said she got her shingles vaccine within the past year because she trusts the protection it offers. When it comes to covid, she said she’d rather risk the virus than be injected with vaccines that feel too new, despite decades of research underpinning their unprecedented development.

“The covid vaccine to me is experimental and we are the case studies,” she said. “Maybe a year from now, I’ll see what happens to these people who got the vaccine.”

On a recent evening, Ray Sederdahl, 63, sat on his girlfriend’s Kalispell porch while his grandkids picked dandelions. The Air Force veteran said even if he wasn’t skeptical of the vaccines, he thinks of covid as an illness that’s much like the flu.

“The VA keeps trying to get me to schedule an appointment and I just say, ‘At this time, I’ll pass,’” Sederdahl said. “A lot of the older vets I talk to, they didn’t get it either, and they’re not gonna get it.”

To Sederdahl, things feel normal enough. Businesses are open and he doesn’t have to wear a mask most places.

Erica Lengacher, an intensive care unit nurse in Kalispell who has worked covid units and vaccine clinics, said she’s sad but not surprised that vaccine rates are slowing. But, she said, the overall feeling at the county’s vaccine clinics is hopefulness — people are still showing up, even if the crowds are smaller.

Lengacher said Flathead was hit so hard this winter, she hopes some natural immunity from those already infected, along with the growing vaccination levels, will be enough to hold off further outbreaks over the next few months.

“Just given our lifestyle — single-family homes, no public transportation, a few people per square mile — we may get away with it,” Lengacher said. “But there’s a big question mark of how variants show up here. There are just a lot of big question marks.”