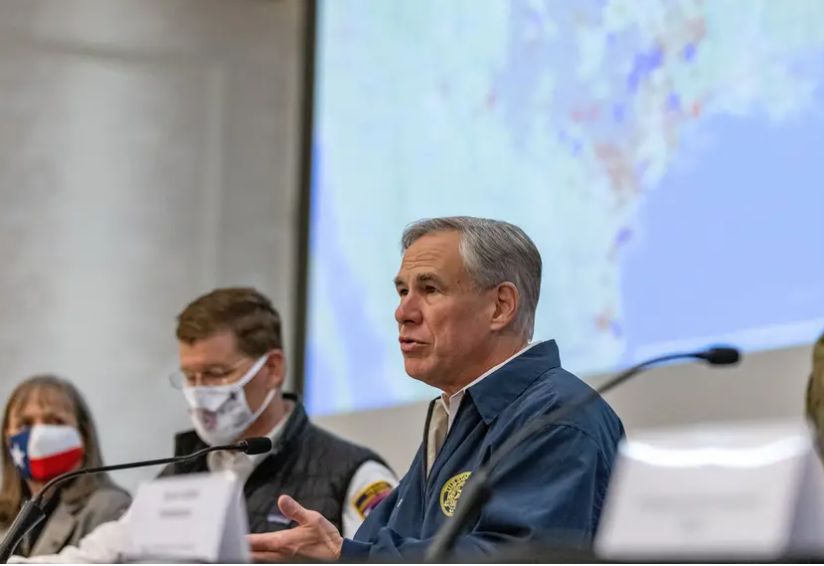 ““What happened is completely unacceptable”: Gov. Greg Abbott calls for winterization of Texas energy system” was first published by The Texas Tribune, a nonprofit, nonpartisan media organization that informs Texans — and engages with them — about public policy, politics, government and statewide issues.

Gov. Greg Abbott on Thursday blasted the nonprofit operator of Texas’ energy grid for its handling of this week’s winter storm and called on the Legislature to consider updates to the state’s power plants to avoid future widespread power outages.

“What happened is absolutely unacceptable and can never be replicated again,” Abbott said at a news conference, describing the failure that left millions without heat in below-freezing temperatures.

He called on state lawmakers to mandate the winterization of generators and power plants, a proposal previously floated but not implemented by state leaders in the aftermath of another devastating winter storm in 2011. He also requested that lawmakers provide power companies with funding to make the necessary changes.

Texas draws power from a variety of sources, including natural gas, coal and wind. Equipment used to generate power for each of these sources can be winterized, or modified to operate during very low temperatures. But most power companies have not made those investments because Texas rarely sees such extreme weather.

Instead, as temperatures plunged, demand for power soared and the state’s unequipped infrastructure buckled. Natural gas production sank, a nuclear power plant had to partially shut down and wind turbines froze. Millions of Texans lost power. Many were left in the dark without heat for hours or days as temperatures remained below freezing.

Power has been restored to more than 2 million Texans since Wednesday, though some 325,000 people remain without electricity.

“Texans deserve answers about why these shortfalls occurred and how they will be corrected,” Abbott said. “And Texans will get these answers.”

In demanding those answers, Abbott once again pointed his finger squarely at the state’s grid operator, the Electric Reliability Council of Texas. On Tuesday, Abbott called on ERCOT’s leadership to resign and declared reforming the entity an emergency item for the 2021 legislative session. Earlier Thursday, ERCOT President Bill Magness said the state’s power grid was “seconds and minutes” away from catastrophic failure.

Five days before the winter storm hit Texas, Abbott said ERCOT ensured officials that the power generator was prepared for the cold temperatures, and even issued notices to power plants to ensure they were winterized properly.

Abbott also pointed to the entity’s winter assessment, in which ERCOT concluded that it would be able to generate enough electricity throughout the season.

“ERCOT failed on each of these measures that they said they had undertaken,” Abbott said.

Abbott’s criticism and new demands from the Legislature came hours after ERCOT said it would publicly disclose what happened. Two top leaders from the nonprofit told reporters Thursday that the entity will soon begin to gather data for a “fairly massive report” that will eventually be released to the public.

“We have in our computer systems a list of all those generators — when they went offline, when they came back online … all of that kind of information is there,” Dan Woodfin, ERCOT’s senior director of system operations, said.

Woodfin said ERCOT “in the coming weeks and months” would begin to gather that data in response to the scrutiny that’s been mounting. A Feb. 24 “urgent meeting” with ERCOT leadership is set to happen before committees in both the state House and Senate convene next week to investigate why those outages lasted so long and what role the entity had in those failures.

It’s not the first time the idea has come up. Texas politicians and regulators were warned by federal regulators after the 2011 winter storm that more winterizing of power infrastructure was necessary.

ERCOT officials have said that some power generators implemented new winter practices after the freeze a decade ago, but they were voluntary. Woodfin has said that during subsequent storms, such as in 2018, it appeared that those efforts worked. But he said this storm was even more extreme than regulators anticipated based on models developed after the 2011 storm. He acknowledged that any changes made were “not sufficient to keep these generators online” during this storm.

It’s unclear how much winterizing power sources would cost power plants or the state, but experts and industry leaders say it won’t be cheap.

“If you wanted to over engineer the ERCOT grid so this could never happen, the cost would be astronomical,” said Bernadette Johnson, senior vice president of power and renewables at Enverus, an oil and gas software and information company headquartered in Austin.

“Canada runs power systems with weather colder than this all the time,” he said. “A lot of these problems you can fix by spending money. There is a question: If you have low probability of an extreme event, do you want to spend the money?”

ERCOT, meanwhile, has been facing questions beyond winterization. On Thursday, U.S. House Speaker Nancy Pelosi said the Energy and Commerce Committee would probe the causes of power outages. And the entity has received criticism after names and biographical information of its board were removed from its website. A spokesperson had previously said that information was taken down due to leadership receiving harassing messages and threats.

Magness, ERCOT’s president, said Thursday that, “on reflection,” that information would be restored soon.

“I think as people observed,” he said, “it was public information that has been on the website in the past.”

Meanwhile, Texas Attorney General Paxton said Wednesday night he’s launching an investigation into ERCOT and related entities over “their mishandling of this week’s extreme winter weather.” Paxton did not specify what kind of an inquiry he was launching or what specifically his office plans to investigate.

“They have left 3+ million homes w/o power for days, including my own,” Paxton tweeted.

Paxton, who is facing an indictment on felony charges of securities fraud, more recently has been accused by former top employees of misusing the office of the attorney general on behalf of a donor. Those allegations have already sparked civil lawsuits.

A Paxton spokesperson did not immediately respond to a request for comment about the ERCOT investigation.

This article was originally published on “What happened is completely unacceptable”: Gov. Greg Abbott calls for winterization of Texas energy system