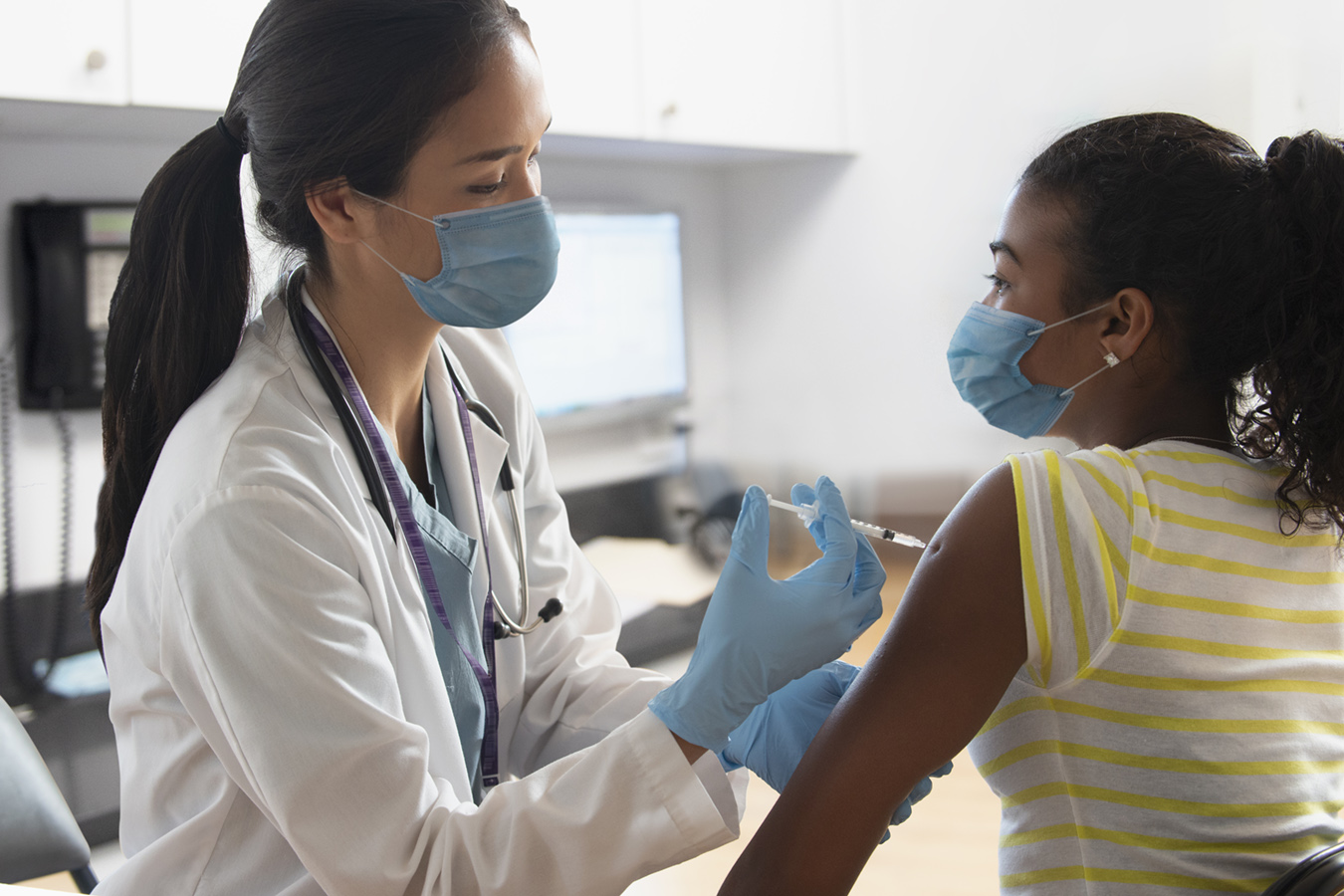 What Childhood Vaccine Rates Can, and Can’t, Teach Us About Covid Vaccines

Data on childhood vaccines, such as the one that protects against measles, mumps and rubella, provide hints. They show that the collective protection known as herd immunity can break down in pockets where not enough people choose to be immunized. Experts say at least 92% of the population must be vaccinated against measles to prevent it from spreading.

In the 2019-20 school year, for example, fewer than 5% of kindergartners in Colorado had an exemption from the MMR vaccine, a KHN analysis found. But the exemptions were not evenly distributed in the state: In schools with complete data, at least 15% had enough kindergartners with nonmedical exemptions — religious or personal — to leave them vulnerable to measles outbreaks.

“The Venn diagram will have some overlap, but it wouldn’t tell us the whole story,” said Saad Omer, a vaccine researcher and infectious disease epidemiologist who directs the Yale Institute for Global Health. “It’s not the same circle.”

Experts like Omer are worried, however, that the political divisions that arose during the pandemic, and are evident in attitudes toward the covid vaccines, could spread to other vaccination campaigns. Some of the same coalitions that, in recent years, fought expansion of childhood vaccination requirements in state legislatures around the country joined to fight covid lockdowns.

School immunization rates can shed light on how pockets of vaccine uncertainty work. Colorado is one of 15 states, according to the National Conference of State Legislatures, where parents can opt their children out of vaccines required for school entry for philosophical reasons. It stands to reason that, in those states, school immunization rates may provide a more unfiltered look at vaccine refusal than in others.

Research shows childhood immunization exemption rates tend to remain relatively stable within schools over time, according to Daniel Salmon, who directs the Institute for Vaccine Safety at the Johns Hopkins Bloomberg School of Public Health. A KHN analysis found that in Utah and Idaho, which have a decade of school-level MMR data, most schools with complete data had the same herd immunity status in 2018 as in 2009.

Such trends might be somewhat predictive of how covid vaccines will be accepted, because once a community resists vaccination it’s hard to undo.

But this measles immunization data doesn’t measure vaccine hesitancy — it measures “actual refusal,” said Salmon. He also noted that childhood vaccines are much more easily accessible than covid vaccines, so school immunization patterns won’t reflect the potentially large number of people who forgo the covid vaccines because they’re just too hard to get.

Also, school immunization exemption figures capture the opinion only of parents of school-age kids, who may not be representative of the general population.

And there’s another, more basic issue: Vaccine hesitancy is not monolithic, regardless of which vaccine or population you’re talking about.

“I saw families that give certain vaccines to one child and other vaccines to a different child based on their perceptions of necessity,” said Jennifer Reich, a sociologist with the University of Colorado-Denver who studied vaccine acceptance. “I could see a family deciding that they want to delay childhood vaccines, but they think the covid vaccine is really important for their grandmother.”

Omer said only a tiny fraction of very vocal people oppose all vaccines.

A somewhat larger segment of parents will refuse one or more — but not all — vaccines for their children. And then there’s a much larger group that expresses hesitation about vaccination but ultimately accepts it.

Outright refusers are likely to make up a small part of the very broad group of adults who hesitate to get a covid vaccine, too, Omer said. Many people are sitting on the fence and may still opt to be vaccinated.

Polls from KFF and the Pew Research Center show Americans’ opinions have shifted over the past few months, with a growing share saying either that they want to get a vaccine “as soon as possible” or that they’ve already gotten one. (KHN is an editorially independent program of KFF.)

Interestingly, despite lots of coverage about vaccine concerns among racial and ethnic minorities, the latest KFF numbers show a nearly equal share of white and Black respondents — 15% and 14%, respectively — said they would “definitely not” get the vaccine.

“So far, childhood vaccines have been a bipartisan issue, more or less,” said Omer. “Every few months, there’s a debate on Twitter about whether it’s a conservative issue or a liberal issue, or if it’s the crunchy granola crowd or the libertarian crowd that is driving it. It’s all of the above.”

Indeed, Colorado schools that lacked herd immunity against the measles in 2019 because of high rates of nonmedical exemptions are a motley crew, spanning everything from a private religious school in the state’s rural southwest to a private Waldorf school in affluent Boulder and a public high school in the Rockies.

Still, vaccination skepticism has trended Republican in recent years as mistrust of scientific authority has grown in the party. Following the measles outbreaks that sprang up across the United States in 2019, GOP legislators in several states opposed Democrat-led efforts to tighten vaccine exemption laws — a harbinger of GOP-led protests against lockdowns during the pandemic.

And attitudes toward covid vaccination largely fall along party lines. As the KFF survey shows, the percentage of Democrats who said they wanted to get the shots as soon as possible (or had already gotten them) rose 28 points between December and February. The percentage rose 13 points among Republican respondents.

An increasingly politicized covid vaccine landscape could threaten acceptance of other vaccines. Kristin Lunz Trujillo, a political scientist at Carleton College in Minnesota, said the pandemic teed up a situation in which vaccines could become a partisan issue.

“We’ve seen with the covid vaccine, more so than any vaccine previously, the politicization that’s occurring,” she said.

And as Omer put it, when something leaves the realm of opinion and enters partisan identity, it calcifies.

“You become less persuadable — even in the face of a lot of evidence,” he said. “With masks and the current debates around lockdowns, etc., if vaccines get folded in as part of that level of political identity, or a sense of yourself or your ideological brand, then we are in deep trouble.”

Dr. Peter Hotez, a professor at Baylor College of Medicine in Houston, has watched the anti-vaccine campaign grow from a fringe movement in the early 2000s. It accelerated in 2015, when it linked to the political extreme on the right under a banner of “health freedom,” he said.

On the other hand, said Reich, covid vaccines may create opportunities to improve the conversation around vaccines in general. Previously, she said, vaccine messaging tended to be one-way: billboards, brochures, public service announcements. Now, state and local governments are engaging much more with stakeholders and community leaders.

“This moment is creating an awareness that communication that is successful has to be two-directional,” she said. “That’s an overdue change.”

People have questions about what are, as Reich pointed out, vaccines that remain unlicensed. Engaging them in conversations, rather than dismissing them as victims of misinformation or conspiracy theories, could increase childhood vaccine use, too, she said.

What Childhood Vaccine Rates Can, and Can’t, Teach Us About Covid Vaccines