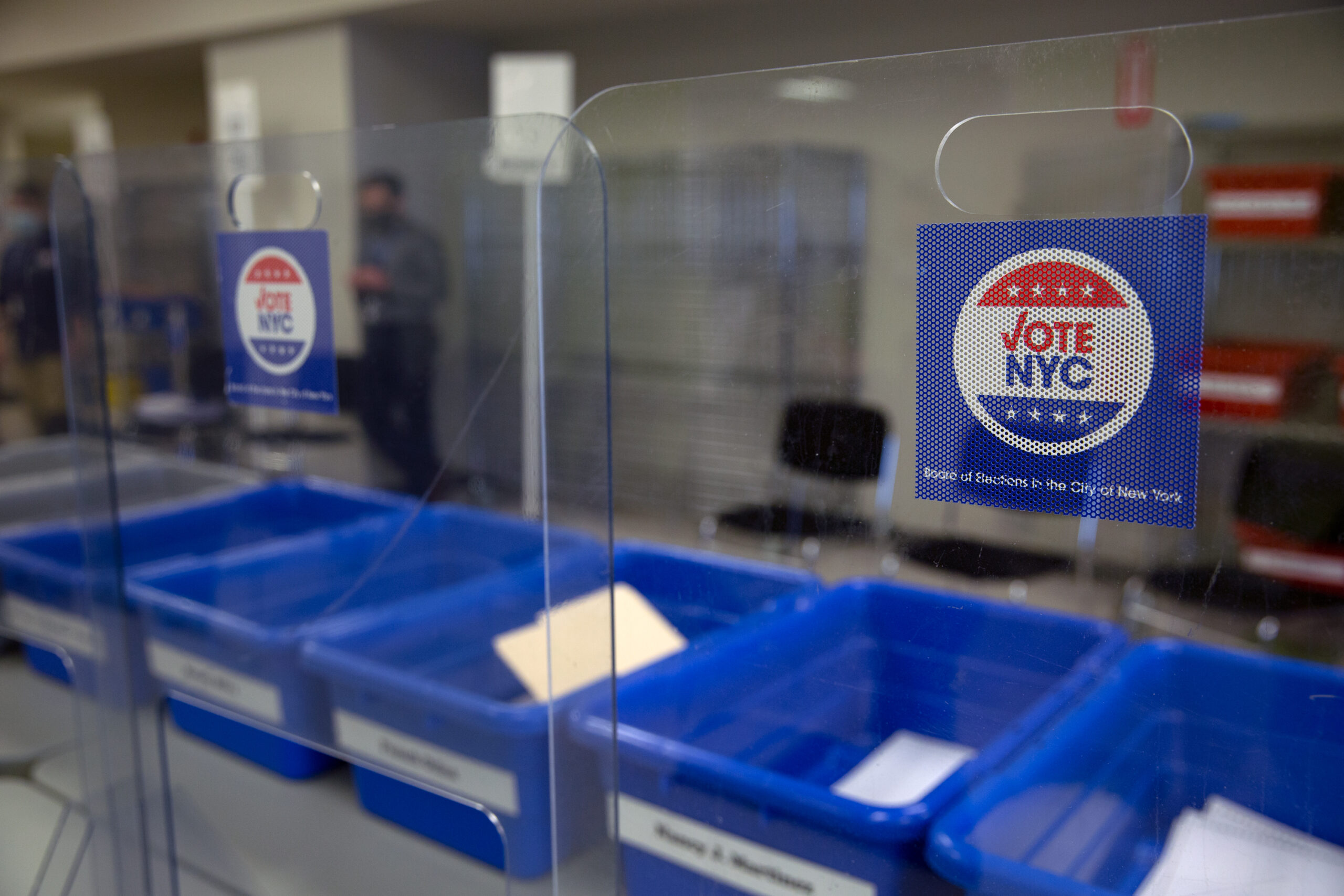 Ranked choice voting will debut citywide in less than a month with absentee and early in-person ballots cast in dozens of primary elections — but key questions remain unanswered on how the results will be tallied and disclosed.

City Board of Elections leaders said Tuesday it will take at least two more weeks before their state counterparts will decide whether to approve the software that will tally up to five ranked choices for each voter and then allocate votes among candidates.

Meanwhile, the city board has not yet committed to releasing ranked results at the hyperlocal level, potentially frustrating public accountability.

The city Board of Elections did not answer questions about the absence of election district data for the year’s past special elections or how results will be presented in June.

“Step one is the software being certified,” said Valerie Vasquez, a board spokesperson.

In late January, the state Board of Elections committed to working with the city to come up with a plan to certify tabulation software after more than a year of tension over vendor selection, Gothamist reported. That certification is still pending.

The June 22 primary, with contests ranging from City Council races to the fight to become mayor, will mark the first citywide test of ranked choice voting in New York.

Under the new system, voters will get to choose up to five candidates in order of preference. If no one candidate gets 50% of first-place votes, the last-place finisher’s votes are parceled out to the other candidates — a process that’s repeated until just two candidates remain.

Forced to Count by Hand

For the four special elections for City Council held in February and March, the BOE tallied thousands of paper ballots manually because a software platform was not yet in place.

Staffers sifted through the ballots one by one, kept handwritten tallies of the votes cast and placed the ballots in plastic bins marked for each candidate.

Workers then took ballots in the box with the fewest cast and redistributed each to the box matching the next choice on the voters’ lists, repeating the process until two finalists remained and the one with the most votes won.

In the southeast Queens contest to replace former Council member and current Queens Borough President Donovan Richards, the first of nine rounds of manual ranking took roughly seven hours. Selvena Brooks-Powers emerged as the winner after a three-day count of some 7,000 ballots.

State Board of Elections staff are still in the process of testing the software that the city board seeks to use to tabulate rankings and will make a recommendation on May 25, said John Conklin, a spokesperson for the state board.

The proposed software is based on the open-source RCV Universal Tabulator, which has been used in Utah and Michigan.

“The state board is working with its testing partners to examine the software and technical documentation submitted, and perform the necessary functional and security testing to ensure compliance with all relevant statutes and regulations,” Conklin said in a statement. “The certification process is on schedule.”

Meanwhile, election watchers have pondered why the Board of Elections hasn’t provided its usual granular level of voting results data.

Hand counting of ballots did not allow much time to prepare a geographic vote breakdown, Queens political consultant Benjamin Rosenblatt observed. He noted that for every past special election in the city, the BOE provided unofficial results on election night down to the election district level.

This year, the Board of Elections only made election district results available in February’s race in Queens District 24 — the only special election this year where the victor won outright on election night. Councilmember James Gennaro (D-Queens) now holds that seat and is running in the primary along with some of his former rivals.

The absence of detailed results became clear to grassroots activists after the results of the City Council special elections rolled in.

The Board of Elections has historically presented a breakdown of results for each election district, which typically consist of a couple of city blocks.

But for the special elections that debuted ranked choice voting, the board shared only a recap of total ballots cast in the entire Council district and a colorful bar chart showing the allocation of votes across rounds.

Émilia Decaudin, a Queens Democratic district leader who’s also a political consultant, said that while the graphs were nice, they provided no insight into how people voted in different parts of a district or how they interacted with the new ranked choice system.

The incomplete data is “blunting” her ability to give campaigns advice, she said.

“It’s super weird, like there’s a profound level of information that they are no longer providing,” Decaudin added. “If you’re just looking at it districtwide, you’re conflating different communities that vote in different ways.”

Software should make it faster and easier for the Board of Elections to release election district ranked-choice tallies — but nothing is guaranteed.

“It’s helpful for voters to understand when we elect them to office where their support is coming from, what are the neighborhoods where they need to shore up more support,” Otis said.

‘In general, the more transparency the better.’

Candidates who lost their special election but are making another go in the upcoming primary said that neighborhood-level insights are essential in guiding campaign outreach and strategy.

“We don’t see any reason why not to provide that detail since especially in this case it will help in the primary,” said David Neustadt, a spokesman for City Council candidate Mino Lora. “In general, the more transparency the better.”

Lora finished second to Eric Dinowitz in The Bronx’s District 11 race, after six rounds of ranked-choice tabulations. But because the district level information is not available, she has no idea where her votes came from.

Steve Romalewski, who runs the City University of New York Mapping Service, said that the board’s longstanding practice of publishing detailed election data had been a “terrific thing for transparency and the ability for the public to better understand elections.”

He and other elections analysts carefully parse the data to glean voting patterns at the most local level, block by block. He added that without election district results, there is “no way of knowing” how the patterns played out within Council districts.

He urges that the board should at minimum present the vote count by election district for the final ranked-choice round.

“It’s the first time that ranked choice voting has taken place. It’s really important in general for the Board of Elections to be transparent,” Romalewski said. “We the public place a lot of trust in them…. The more eyes on the process the better.”

Others, including Assembly Member Daniel Rosenthal (D-Queens) have pressed the city board to reveal a more complete picture of ranking results.

In March, Rosenthal introduced legislation that would mandate the city Board of Elections to release the tabulations and results for candidate rankings, even in elections where a candidate garners more than 50% of the vote immediately.

“When the ranked-choice system was overwhelmingly approved, there was an expectation that the process would become more open and a plurality of voices would be heard,” Rosenthal said in a statement. “This legislation would help to achieve that goal as well as foster greater voter engagement and participation by giving New Yorkers the full scope of the electorate.”

The bill is being reviewed by Assembly counsel, said Tim Thomas, a spokesperson for Rosenthal.

Ranked choice voting advocates, like Susan Lerner of the government watchdog group Common Cause, believe the city Board of Election should release the full cast-vote record within several days of the primary.

That would allow the public to analyze the data however they want and verify the results, she said.

“I wonder if it’s because you’re getting sort of more specific results, or you can see on each round where the vote transfer is down to each individual vote, and I think there’s something about that — that gives people confidence in the system,” she said.

This article was originally posted on Weeks From Pivotal Primary, Still No Software to Count Ranked Choice Votes