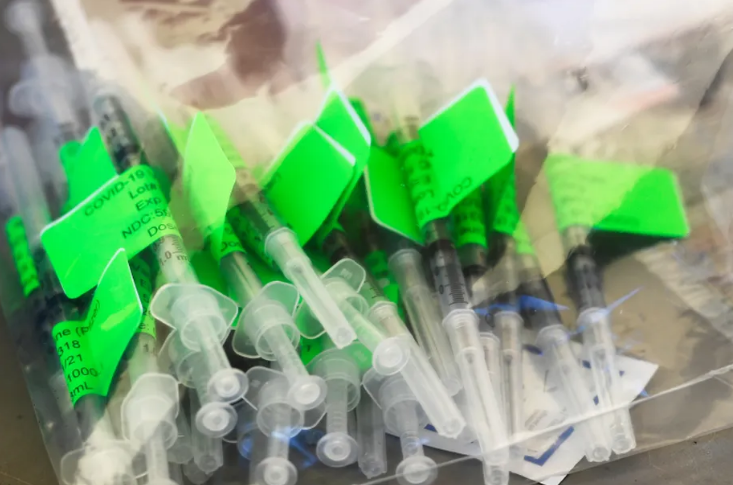 Vaccine trials in teens yield promising results. What will that mean for NYC schools in the fall?

By Christina Veiga Chalkbeat on April 1, 2021

Encouraging news from COVID-19 vaccine trials in adolescents could help pave the way for “really big and important” changes in schools this fall, one of the city’s top doctors said Wednesday.

“To be quite frank, I literally almost dropped my phone when I saw how impressive the data was,” said Dr. Jay Varma, the mayor’s senior health advisor. “It’s amazing and incredibly important news.”

The makers of the Pfizer and BioNTech vaccine announced results of a Phase 3 trial in children aged 12 to 15 that showed the shot produced antibody responses and did not cause serious side effects. Of those who received the vaccine, none tested positive for COVID-19. In the placebo group, there were 18 cases. The trial included 2,260 young people.

It’s probably too late to count on a vaccine for children for the rest of this school year, Varma said. He noted the timeline required for ultimately getting the shot approved, along with the weeks-long lags between the necessary two doses and until the vaccine reaches full efficacy.

Varma cautioned that it will still take time to get full results from the trials and to understand what they will mean for returning to classrooms, but he added that the preliminary findings open the possibility of a much different school year, come September.

“We are looking, I think, probably more at the summer for us to really accrue the benefits, kind of as a whole society and then, of course, as it relates to our schools,” he said. “But absolutely, this is really tremendous news, and it may have a really important impact on what happens with school protocols in the fall.”

For weeks, city leaders have said they are reevaluating the requirements for closing schools when positive coronavirus cases are discovered. The state, meanwhile, is reviewing whether to allow schools to shrink social distancing down to three feet, in the wake of new national guidance that says elementary school students could be spaced more closely in classrooms so long as everyone is masked. In middle and high schools, three feet is recommended only if community spread of the virus is not high — which is not the case currently in New York City.

The city has been conducting weekly, random coronavirus testing of students and educators inside schools, and also has an aggressive policy of shutting down buildings in certain cases when multiple infections are discovered. Spread of the virus has been exceedingly low in schools, but the closure protocol has been disruptive, leaving parents scrambling to find child care, and teachers to adapt lessons for online instruction with little notice.

Maria Lima, an immunologist and associate dean of research at CUNY medical school, called the results of the trials “amazing.” But she was reluctant to forecast a return to a normal school year.

“Does that mean everybody can go to school in the fall? I don’t know,” she said.

Lima noted that the trial was small and also said the city may find itself up against parents who are reluctant to get their children vaccinated.

A shot for children and teens is likely to open up thorny questions about whether the vaccines will be required to attend city public schools. Following a measles outbreak in 2019, the state rolled back religious exemptions for vaccines and medical exemptions were also tightened. In the Los Angeles school district — the second largest in the county — officials have already said they intend to make COVID-19 vaccinations mandatory for students.

Since the vaccine isn’t perfect, Lima said schools will face questions about whether to continue testing for COVID-19 on campus, and if students will have to test negative to learn in person.

“It’s going to be complicated,” she acknowledged, but added a plea: “The vaccine is safe, and parents, please take it.”

With the public health picture constantly shifting, New York City leaders haven’t laid out many plans for the school year ahead. There have been some hints about what’s in store for 2021-22, however. De Blasio has said the goal is to phase out hybrid learning — where students attend school part time in socially distanced classrooms and participate in online learning when not in school. Instead, he said the city is planning to offer five-day-a-week instruction in person, or a fully remote model. Expanding who is eligible to receive vaccines will likely help move the city closer towards that goal, the mayor said.

“We are already planning for September to bring all our kids back, for everyone who’s ready to come back,” de Blasio said. “As this progresses, it just makes it better.”

But one of the biggest questions facing city and education department leaders is whether families and educators will feel safe enough for a full return to classes. That makes the results of the latest vaccine trials particularly significant for schools because older children may be more likely than younger ones to spread the virus — and have also been less likely to choose to return to school buildings in New York City.

The state plans to start vaccinating those 16 and older beginning next week. Meanwhile, city officials estimate at least 40,000 educators have received at least one dose of the vaccine as of mid-March.

The Pfizer and BioNTech shot is the only vaccine that the U.S. has authorized for those ages 16 and up. The Moderna vaccine, which works similarly, is approved for those age 18 and older, as is the one-dose Johnson & Johnson vaccine. The U.S. Food and Drug Administration has granted all three of these vaccines Emergency Use Authorization. Moderna is currently testing its vaccine in young children, and Johnson & Johnson has said its shot could be available to children by September.

This article was originally posted on Vaccine trials in teens yield promising results. What will that mean for NYC schools in the fall?