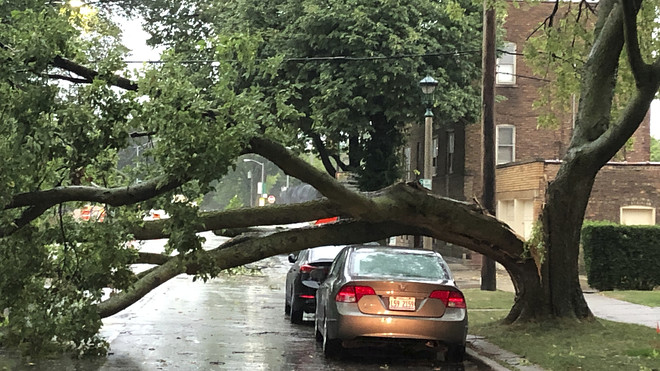 A professor at Northern Illinois University has received a grant from the National Science Foundation to continue his research into severe weather forecasts.

The $475,000 award will be used mainly to support student researchers assisting on a project to improve long-range predictions of storms that are capable of producing tornadoes and hail.

Victor Gensini, associate professor and deputy director of the NIU Center for Research Computing and Data, said he believes his model could forecast tornado and hail-producing storms at least two weeks in advance.

“To get the federal funding for a research group is enormous, as it promotes science that’s really going to get out and benefit society,” Gensini said. “This is the culmination of ten years of grant proposal writing.”

In 2018, Gensini led a study identifying a method for better predicting the probability of damaging hailstorms. Later, published research showed the model helped forecast an extensive tornado outbreak in late May 2019, nearly four weeks before it began.

Gensini says the average Illinois citizen might not change his behavior due to a long-range forecast, but the information could be valuable for many others.

“If you were the Illinois Emergency Management Agency or an insurance company … you could move assets, you could begin to try to mitigate against the potential risks,” Gensini said. “If I were able to tell [farmers] three weeks from now that there is an enhanced potential of significant rain and flooding, that may alter a decision on when to plant crops this year.”

The team examines long-term weather patterns that begin as thunderstorms thousands of miles away over the waters near Indonesia.

“If we see a lot of activity there, it’s sort of like somebody bouncing up and down in a wave pool with a raft,” Gensini said. “It sends out these waves in the jet stream toward North America that end up influencing our weather patterns. It takes about a week or two for those waves to get here, but that wave train is something that we can latch on to for potential predictability.”

He sees the future possibility of a system similar to those that predict the number of tropical storms prior to the start of the annual hurricane season.

“To land something like this is not only really significant for our research group, but also just for NIU, as a whole,” Gensini said. “It’s a pretty humbling thing and we’re really excited to get started on the research.”