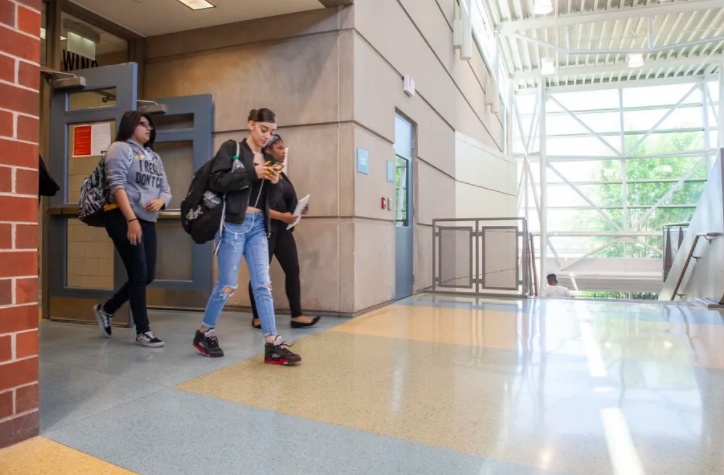 The Chicago Teachers Union’s representative body overwhelmingly voted Thursday in favor of a tentative agreement that would pave the way to reopen high schools for some in-person learning for the first time since last spring.

The agreement passed the union’s House of Delegates with 83% in favor, 9% against and 8% abstained. They also recommended members vote in favor. The final step is the broader membership vote.

As part of the deal, the district has agreed to create a vaccination plan for students and their family members in Chicago neighborhoods hardest hit by COVID-19, a three-tier reopening schedule that would have students at the biggest high schools returning to buildings as little as one day a week, and accommodations for staff who are medically unable to work in person or are caregivers for at-risk relatives.

Teachers upped the pressure on the district this week to reach an agreement by refusing to report to classrooms Wednesday and Thursday, as parents expressed frustration at yet another stalemate between teachers and district leadership.

In a statement, Chicago school officials lauded the agreement as a “critical milestone” toward resuming in-person high school learning. “It’s a tremendous step forward for the academic and social-emotional well-being of our students.”

The vote Thursday was similar to that made by delegates over the elementary and middle school reopening agreement, which acted as a framework for this agreement and was passed after a labor dispute that delayed reopening for weeks.

If approved by the full union, it would end the impasse over reopening and clear the way to open high schools for the first time since last spring in the nation’s third largest school district. It is not clear when that vote will happen.

The tentative agreement teachers will weigh also includes guidelines for how often high school students would attend in-person classes. Some students, at schools where more than 60% of students opt in or there are more than 1,500 students, would only attend school one day a week which could frustrate some families who were pushing for students to return to classrooms multiple days a week.

The city’s teachers union has been a force in shaping Chicago’s reopening plans in a pandemic school year that has looked like no other. The union pushed for delays in the fall, and again this winter, as it challenged district leaders on safety protocols, vaccination timelines, instructional hours, accommodations for teachers with medical needs or vulnerable family members. The uncertainty put many families on edge.

“The parents are so in the dark right now,” Aimee Bar-Kam, the parent of a district sophomore, said earlier this month as tensions grew. “Here we are at the eleventh hour without any transparency or communication, and it’s just so frustrating.”

Union demands in elementary reopening negotiations helped pave the way for a more thorough ventilation plan, school-level safety committees that are supposed to monitor safety protocols at individual campuses, and a vaccination plan that prioritized teachers, though some argued it pushed some other residents further back in line.

The two sides reached a hard-won deal to reopen elementary and middle schools in February, but it did not cover high schools. The teachers union pushed for a separate agreement, arguing that the complexity of scheduling and the higher risk of COVID-19 exposure among older students warranted separate guidelines.

The complexity of high school talks

Both sides initially sounded optimistic that they could quickly come to an agreement that would pave the way to reopen school buildings for high school students.

After a promising start, however, the talks started to veer into the familiar acrimony that defined union-district relations during the run up to the 2019 teachers’ strike and then again mid-pandemic. Tensions inevitably surfaced publicly: In one bitter 24 hours, the district sent out a press release announcing the tentative high school reopening date and touting progress in the talks. The union countered with a statement criticizing the district for unilaterally putting out the news, noting that no agreement had been reached yet. In turn, the district shot back by sending reporters several emails that showed union President Jesse Sharkey had reviewed and signed off on the press release.

As the reopening date neared and teachers began to refuse to report to classrooms, there was increasing pressure on both sides to make a deal.

According to the tentative agreement shared Thursday, the district agreed to ensure that students and families in the top fifth of Chicago communities most vulnerable to COVID-19 could access vaccines, and use district-run clinics to help make it happen. Chicago Public Schools also will offer shots at district-run sites to students who are 18 years or older, and work with the union and health department to help students and their families access vaccine opportunities through informational flyers.

More broadly, the agreement promises that the union, district and health department will collaborate to develop a student and family vaccination program that could include giving information about special vaccination times and sign-up codes.

The union wanted school officials to agree that teachers who have no in-person students can work remotely — the district ultimately said that teachers could request the option from their principals.

Working remotely on Wednesdays, a day all students learn from home, was approved for high school teachers and, conditionally, for elementary and middle school educators. Prekindergarten and some special education teachers have not been given this option.

Employees who were denied child care or household support accommodations can take unpaid, job-protected leave through the end of the year.

The union also asked to limit the number of in-person days for high school students depending on the size of the school. Some high schools with lower enrollment plan to bring back students nearly full time.

The agreement also includes safety procedures for students in art, music, and career and technical education classes; flexibility for schools to shift student schedules as needed; and safety suggestions for hallway passing times at high schools.

Notable, too, are topics of the agreement where the union would engage in “continuous bargaining,” where the union and district continue to discuss an issue even as they move toward an agreement. There is no resolution yet on what simultaneous instruction — the practice of teaching students remotely and in-person — could look like at the high school level.

It’s also not clear how many students will actually return. Fewer students than expected returned when Chicago reopened pre-K classrooms, and later its elementary and middle schools, though officials said more students returned after the initial week.

As the city’s elementary and middle school reopening so far shows, what in-person school actually looks like varies widely school by school. Some schools have brought back in-person learners four days a week, while many have stuck to the district-prescribed two. Some students — the district can’t say how many — are in classrooms that are monitored by an adult, but their primary instructor works from home. Similarly, many decisions about what high school will look like will fall to individual campuses.