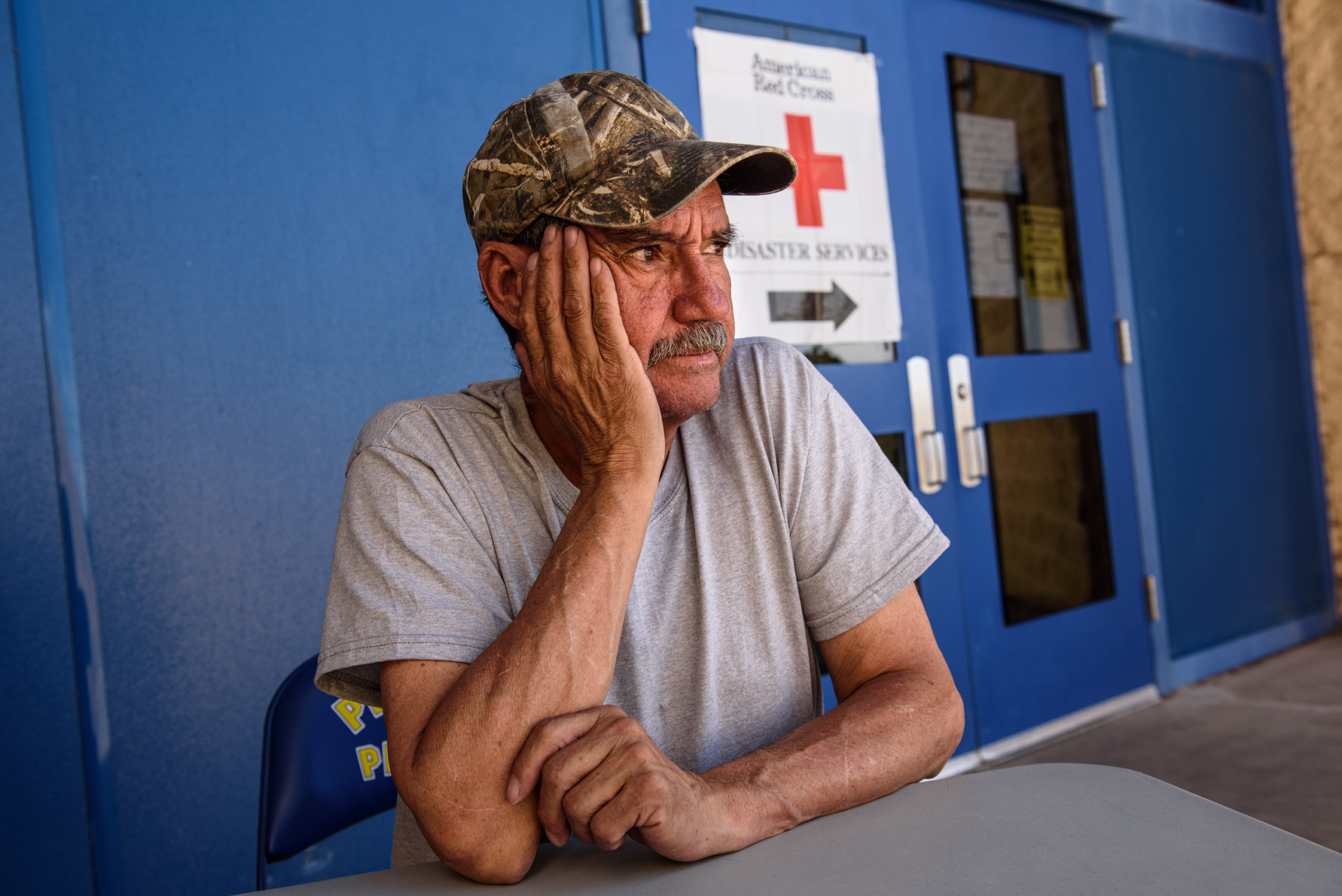 Outside of the Glorieta Adventure Camp dining hall, 56-year-old Lisa Blackburde was having an emotion-filled conversation with a couple of other evacuees.

Nearly three weeks ago, as the fast-moving Calf Canyon/Hermits Peak fire made a run toward her home near Ledoux, Blackburde heeded a mandatory evacuation order that had already been in place for days. Her boyfriend, Michael Pacheco, remained behind to save what he could. “He was a seasonal firefighter for the state,” she said, “so he knows what he’s doing.” They have a horse, a dog, 13 cows and three new calves. “And four of the cows are still expecting.”

If Pacheco hadn’t stayed to put out spot fires, she was sure it would have all gone up in flames. And they don’t have homeowners insurance.

“I don’t know if we ever really thought about it, because we couldn’t afford it anyway,” Blackburde said. “We live on about $1,000 a month. As it is, we can make do. Michael cuts and bales hay, raises cows, and we have our place.” Choking up, she added, “We would’ve been devastated if we lost everything.” Last she’d heard, their mobile home and animals were still safe.

The Calf Canyon/Hermits Peak fire has now officially been declared the largest in New Mexico history. Between 260 and 400 homes are estimated to have been lost to it so far, and authorities caution that this number is likely to rise as the blaze continues to rage along the eastern flank of the Sangre de Cristos. Additionally, more than 200 houses were gutted in April’s McBride fire around Ruidoso. On May 4, President Biden approved a disaster declaration that frees up federal funding to help homeowners rebuild, including, crucially, “low-cost loans to cover uninsured property losses.”

With so many homes lost in such a short period of time, lack of homeowners insurance in New Mexico has emerged as a persistent and growing issue. According to state regulators, it can be exceedingly difficult to obtain coverage in areas of high wildfire risk. Among the factors that companies take into account are whether an address is on a paved or dirt road (paved is better); whether it borders National Forest land (generally not good); whether there are hydrants nearby (a big plus); and whether the local fire department is professional or volunteer (professional is better).

Those considerations put many rural New Mexicans at an inherent disadvantage. An estimated 131,600 housing units in New Mexico are at “high and extreme risk” from wildfire, according to Verisk Analytics Inc., a data analytics and risk assessment firm.

The situation has become increasingly fraught — “especially over the last five years,” said Janet Ruiz, a spokesperson for the Insurance Information Institute, a New York-based industry association. “With climate change, it’s hotter and drier and windier. We’re seeing more and more wildfires in areas where there are houses … If a company wants to have less risk on the books in a certain state, policies won’t be renewed.” Those who are able to keep their insurance in higher-risk areas are now paying more for it.

As a result, some homeowners in New Mexico have been priced out of the market altogether, while others are being denied coverage after decades of faithfully paying their premiums.

For 44 years, Senaida and Damian Duran, a couple in their 70s, had insurance for their home in the Mora Valley. “But in 2016, we got an email saying they wouldn’t renew us,” recalled Senaida who, with her husband, is among the more than 700 evacuees taking shelter at the Glorieta camp. “We went to our agent, and tried again and again to get it, but he couldn’t find anyone who would give it to us because we live too close to the mountain.”

She believes their house is safe for now. One of her sons-in-law, Leonard Maestas, has remained in the evacuation zone to protect it. “He’s spraying down the house, the wood pile, anything he can,” said Raul Valdez, another son-in-law, who accompanied the Durans to safety, along with his wife, Yvonne.

But insurance problems are no longer limited to remote rural areas. In April 2021, Mark Castelin was informed that the insurance on his home in a development near Santa Fe Community College was going to be revoked.

“They claimed that Rancho Viejo South was adjacent to the Santa Fe National Forest,” he said. It isn’t.

Castelin filed a complaint with the Office of the Superintendent of Insurance, the state agency that regulates the industry. He found a sympathetic agent in Española who was willing to help him sort things out with the company and, after much time and stress, he got his policy renewed.

The Office of the Superintendent of Insurance performs a complicated dance, attempting to keep insurance available and affordable for as many New Mexicans as possible while allowing companies enough freedom over prices and policies to make it worth their while to continue operating in the state.

As wildfire risk increases, so has the challenge of balancing these opposing aims. When Gov. Michelle Lujan Grisham declared states of emergency in Colfax, Lincoln, Mora, Sandoval, San Miguel and Valencia counties, the order effectively forbade property insurance cancellations for 90 days in those six counties. But there is nothing to stop companies from canceling those policies in the future — or, for that matter, canceling the policies in other counties right now.

The state does have a little-known option for homeowners who can’t find coverage in the regular market. The New Mexico Property Insurance Program (NMPIP), a nonprofit association, considers itself “a last resort,” said Executive Director Analisa Sisneros. “We don’t want people to come with us. We don’t advertise ourselves or try to get business.”

While they are better than nothing, the coverage and compensation they offer provide far less protection than a standard homeowners policy. And they still don’t cover everyone.

Twelve years ago, Jack Long, a 72-year-old Army veteran and retired rancher, sold his 5,000-acre spread near Wagon Mound following the death of his wife and downsized to a small plot of land in Chacon.

Kate Uehlein, whose place in Guadalupita burned down on May 12, is also uninsured. “Companies won’t insure yurts,” she explained. But she is philosophical about it. “Life goes on. Sometimes you just have to trust the universe. It might take a few months, but I’ll rebuild…I’ve heard the sheep are safe.”

Bryan Doerner, a State Farm agent in Santa Fe, said that since the fires began, “so many people who live off-grid have been calling about insurance. In the last two weeks, I’ve had twice as many calls about insuring yurts as in all my 15 years in New Mexico. Others are straw-bale or made of tires and glass-bottles. Each one has to be assessed individually.” He couldn’t predict how many might actually be able to get policies.

Those who remain uninsured and lose their home to a future wildfire will be left with one dreadful hope: that the blaze that destroyed it grows big enough for the president to declare it a major disaster.