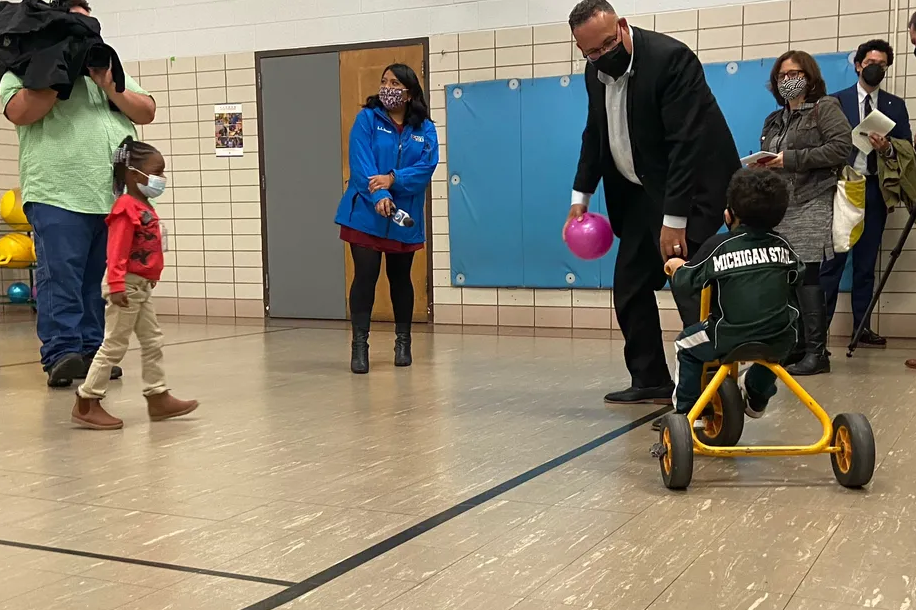 Districts in affluent communities across Michigan will receive $363 million in COVID funds for their highest need students.

The U.S. Department of Education today approved Michigan’s plan for spending $1.24 billion from the Biden administration’s COVID relief package, which includes the funds for wealthy districts.

Federal officials had raised concerns that the plan didn’t focus enough on the students who were hit hardest by the pandemic.

Most of that money will go directly to school districts, with more going to districts with large numbers of students living in poverty. On average, districts will receive $3,040 per pupil, though big winners such as Detroit, Flint, and Benton Harbor will receive upward of $16,000 per pupil.

But state lawmakers set aside some additional funds for districts in wealthier areas — those that were in line for less than $1,093 per pupil — arguing that all schools faced increased costs during the pandemic.

Although affluent districts have fewer students living in poverty and rely on large local tax bases, lawmakers argued that they educated some students with acute needs during the pandemic. In suburban Detroit, the Royal Oak district was set to receive $201 per pupil, while Plymouth-Canton Community Schools was in line for $480 per pupil.

Under the approved plan, those districts and more than 200 others will receive $1,093 per pupil.

In recent months, uncertainty about whether the plan would be allowed by the U.S. Department of Education left some of those districts wondering whether they would face an unexpected, multimillion hole in their budgets. While $363 million is only a fraction of the total federal COVID aid, and will not bring the districts up to the statewide average of federal aid, superintendents said they were counting on it for program expansions that would help disadvantaged children.

“Today’s approval of that plan is a welcome step forward and gives our schools the assurance that they can continue providing their students with the support and top-notch educational experience they both need and deserve,” said Kenneth Gutman, superintendent of Walled Lake Consolidated School District and president of the K-12 Alliance, an advocacy group.

Under the approved state plan, his district will receive roughly an extra $391 per student,or $5.2 million total.

In their application, Michigan officials noted that even the wealthier districts had an average of 35% of students who receive free or reduced-price lunch, an indicator that a not-insignificant portion of students in those districts are living in poverty.

“Notwithstanding the fact that these 223 (districts) as a rule have lower percentages of children with special needs, English learners, and economically disadvantaged children, they nonetheless each educate students in these categories that have been disproportionately impacted by COVID-19,” state officials wrote.

Districts must spend about half of the funds to address learning loss, 10% for summer enrichment, and 10% on after-school programs.

They are also required to use the funds to address the disproportionate impact of the pandemic on students from families with low incomes, students of color, children with disabilities, English learners and migrant students, students experiencing homelessness, and children in foster care.