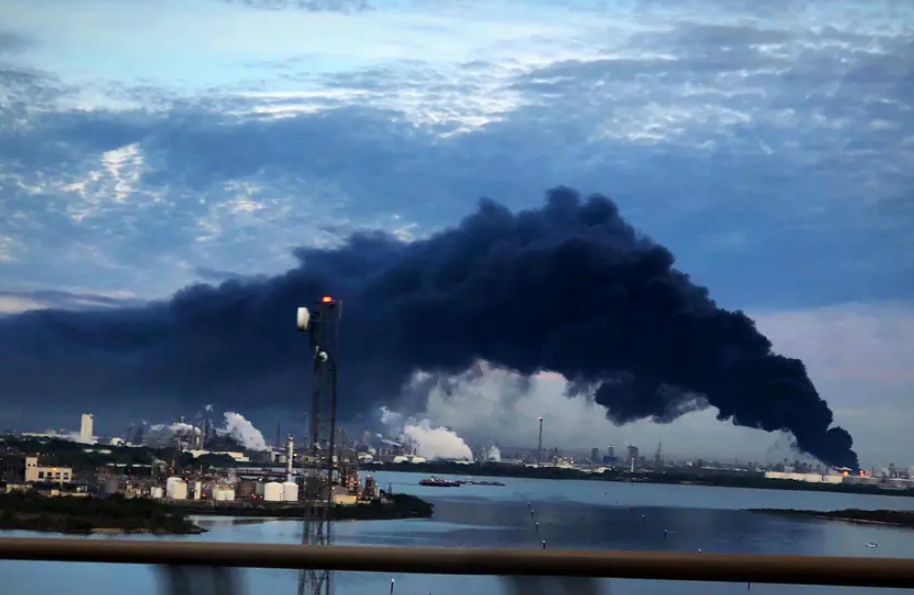 In March 2019, a massive chemical fire broke out after a leak at a chemical tank farm in Deer Park spread to almost a dozen other tanks.

A plume of smoke soon loomed over the Houston skyline and lingered there for three days. Residents of Deer Park were forced to shelter in place due to air pollution hazards, the Houston Ship Channel closed for three days, and millions of gallons of hazardous waste spilled on the ground and leaked into the water.

That chemical fire at Intercontinental Terminals Company’s facility also rekindled a debate at the Legislature about the state’s rapidly growing petrochemical industry, much of it in communities along the Texas Gulf Coast. Thousands of such tanks, typically made of steel plates, are in the Houston area alone, and state lawmakers had already become concerned after at least 15 tanks holding crude oil, gasoline and other hydrocarbons ruptured or malfunctioned during Hurricane Harvey in 2017.

Yet the 2019 legislative session ended without new regulations.

Two years later, the Legislature is nearing approval of Senate Bill 900 authored by state Sen. Carol Alvarado, D-Houston, which will create new standards on the type of tanks that put so many people in her district at risk two years ago. It passed the Senate late last month, and late Sunday night it received preliminary approval by the House.

“I’m very proud of this bill,” Alvarado said. She said it took a long time to negotiate the bill with industry groups, but high-profile incidents like the ITC fire in her district forced the conversation.

“They knew I was going to be calling,” she said. “There were too many of these things that had occurred.”

Democrats filed several bills this session to create new rules on the petrochemical industry. Few state rules apply to the tanks, and none require construction standards that ensure tanks can withstand powerful hurricanes or major flooding.

Alvarado spent years negotiating with industry groups to draft safety standards that would address the most pressing concerns while also not going too far to be unpalatable to the powerful oil and gas industry, whose opposition would be deadly in the Republican-dominated Texas Legislature. Before SB 900 heads to Gov. Greg Abbott’s desk, the House still needs to grant final approval, usually a formality. The Senate would then need to accept a minor changes made by the House or ask for a conference committee to settle the slight differences between the versions of the bill that passed each chamber.

Texas has a long list of rules on the books for chemical storage tanks, including requiring specific construction standards and plans to prevent spills, but they only apply to below-ground tanks and are aimed at preventing contamination of underground aquifers. Above-ground storage tanks are exempt.

The Texas Commission on Environmental Quality can fine companies for discharges or spills that harm the environment, but the agency previously told The Texas Tribune that its rules do not require any spill preparation or prevention measures. The tanks containing toxic and flammable chemicals are often, but not required to be, constructed to standards determined by the American Petroleum Institute, a powerful oil and gas industry group.

During a September work session, TCEQ Executive Director Toby Baker told commissioners that he was frustrated with the agency’s limited authority to regulate chemical plants before disasters occur.

Senate Bill 900, if signed by the governor, would require the TCEQ to establish new performance standards for large, above-ground storage tanks (called “vessels” in the bill) aimed at protecting ground and surface water in the event of an accident or natural disaster. For example, the tanks will be required to have remote shut-off valves, overflow protection and anti-fire technology.

“Had these things been in place, that could have prevented the ITC fire,” Alvarado said.

The agency must establish the rules by September 2023.

The Sierra Club wanted the regulations to go further. In an April legislative committee hearing, Cyrus Reed, representing the Lone Star Chapter of the Sierra Club, said the rules should also include tanks that are smaller in size, require more frequent inspections and take effect earlier than 2023.

“If I thought we could go farther, I would have,” Alvarado said in response to the criticisms during the April hearing. The legislation also allows companies to seek exceptions from the rules if they can prove to regulators that their tanks are at a low risk of flooding, hurricanes, fires and explosions.

Jennifer Coffee, general counsel for the Texas Pipeline Association, said during the hearing that the group, which represents intrastate pipelines, spent “countless hours” working with the Texas Chemical Council and the Texas Oil and Gas Association, two other powerful oil and gas interest groups, to help Alvarado craft a bill that would include the safety features that she considered essential.

The negotiations among all the groups didn’t come easy, Coffee said.

Regulating the tanks gained traction among lawmakers after high-profile chemical accidents provoked outrage from residents and regulators. John Beard, who leads the Port Arthur Community Action Network and worked in the chemical industry for years, told lawmakers in April that the rules “are about protecting lives.”

After a string of chemical fires in Texas in 2019, Alvarado said she found much broader support from Republicans — in particular from Dade Phelan, now the Texas House speaker, whose constituents were evacuated the day before Thanksgiving in 2019 when several explosions rocked a TPC Group plant in Port Neches. That explosion and incidents also forced industry groups to come to the table to negotiate, Alvarado said.

“When you have incidents like this happening, we have a duty to respond and to change that, and that’s what we did,” Alvarado said.