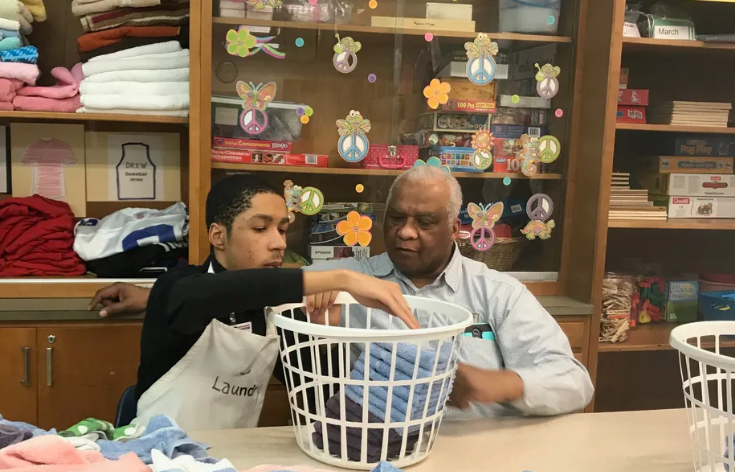 Thousands of students with disabilities are set to ‘age out’ of school. After a pandemic year, they may get more time to prepare for what’s next.

This was supposed to be the year that Jake Smith got a lot of hands-on practice working and doing tasks on his own as he got ready for life after school.

Jake has autism and Down syndrome and is in a life skills program at a high school in Harford County, Maryland. He is one of the thousands of young adults with disabilities in the U.S. who are over 18 but still in school — usually in publicly funded transitional programs that offer hands-on job training or time to learn life skills, like doing laundry or shopping for groceries.

Just before the pandemic hit, Jake’s mother, Tracy Smith, was encouraged by the progress her son made getting to class on his own and learning to vacuum at his job at a local hospice. But when school went virtual and work stopped, a lot of plans went out the window.

Monthly field trips to practice social interactions ended, and Jake’s in-person speech therapy moved to video chat. Through a screen, it was much harder to practice the kinds of social skills Jake needed to work on.

“You can’t teach it virtual,” Smith said. “You have to teach that in a group.”

This month, Jake turned 21. The milestone birthday means he is about to “age out” of his program, a challenge for young adults like him in any year, but made all the more difficult because of the disruption wrought by COVID-19.

Now, lawmakers in at least half a dozen states — Illinois, New Jersey, New York, Maryland, Massachusetts, and Pennsylvania — have introduced bills that would give this group of students additional time in school after they would usually age out. Smith is among the parents in Maryland advocating for extra time for their children.

“Another year in the school, especially in the setting he’s familiar with, would have really helped him build that confidence to move forward,” Smith said. “And it would give him those skills that he could take with him.”

It’s unclear how many of the legislative efforts will be successful. But the wave of bills is an acknowledgment that many older students with disabilities didn’t get what they needed during the pandemic, and it points to a larger question: What exactly is owed to the students who went without services while schools were virtual or disrupted for months?

“There is so much thinking about K-12, but it’s really critical that this group of young adults not get lost in all of the other challenges that schools and states are facing,” said Wendy Tucker, the senior director of policy at the nonprofit Center for Learner Equity, which advocates for students with disabilities.

In many states, the cutoff for students with disabilities to receive services is 21 or 22, as federal special education funds can’t pay for services after a student turns 22. States and districts that allow students to stay longer tap into their own money.

Tens of thousands of students nationwide are likely to “age out” of their educational services this year. In the 2018-19 school year, the latest year with federal data available, 55,000 students with disabilities who were 20 or 21 received services across the U.S., though that leaves out some students in states that allow students to stay longer.

In some places, those students have already been told they’re entitled to more.

Virginia set aside money in its budget to pay for students who turned 22 to attend school for another year. New York City has said students set to age out of education services can stay an extra year, and state education officials in New York are “strongly encouraging” school districts to provide extra time this summer or next school year to students turning 21. In Clark County, Nevada, school officials will let students who’ve turned 21 stay an extra year if their special education team says it’s needed.

But timing is critical. Advocates worry that the longer these efforts take, the harder it becomes to get the word out to families whose children may qualify for additional help, and for districts to hire the staff they need to pull it off. Laws requiring districts to offer students additional time or services, they say, would make it easier to inform families of their rights — instead of directing them through the usual complaint process to get make-up services, which can be difficult to navigate, especially for families who can’t afford private legal help.

“If we have to do it one by one, and case by case, it also means, realistically, that families with more resources are going to be more likely to get the additional time,” said Ashley Grant, who oversees postsecondary readiness for the nonprofit Advocates for Children of New York, which is part of a coalition that’s supporting the New York bill.

So far, the federal government hasn’t officially weighed in. But some advocates, including Tucker’s organization, hope federal officials will encourage states to extend services for students with disabilities and clarify whether schools could use coronavirus relief money to pay for it — which has been a sticking point in some states where legislation has been introduced.

Students who receive transitional services were especially affected by the pandemic. While many schools tried to provide them remotely — using virtual job shadows or teaching students how to grocery shop online — parents say it often paled compared to the hands-on training their children were supposed to receive. Some say their children simply couldn’t access the virtual stand-in.

And even when students went back to school in person, businesses and vocational programs often were closed or not operating at full capacity, making it hard for students to participate in their usual job training.

In Chicago, Merari Olascoaga’s son attended a specialty public high school for young adults with disabilities before turning 22 and aged out in March.

Olascoaga’s son, who has cerebral palsy, had anticipated spending time in the community this year to learn about jobs that might be a good fit for his skills. But while school was remote, that didn’t happen.

“It’s really frustrating as a parent to see your child being left out,” said Olascoaga, who is hoping proposed legislation in Illinois will give her son and others more time in school. “It’s not only for my child, it’s for all the kids who are in this situation. Because all of them have dreams, and they dream to find something in the community, be part of it, and be given the opportunity to explore and get the help that they need.”

Many families tried to fill the gap in services by creating their own lessons at home to help their children practice their skills. Smith, for example, devised exercises to help her son cook, clean, and track events in a day planner.

Another critical part of transitional programs is helping students and families understand the complicated web of agencies that manage vocational training and job placement for adults with disabilities and how to apply for services they may qualify for after they age out of school. During the pandemic, many families didn’t get the same support in this area.

“It’s tough enough when you have a team around you,” said Peg Kinsell, the institutional policy director at SPAN, a parent advocacy group in New Jersey. “But when all that’s gone, they’re really left out on their own.”

That happened to Thomas McHale, whose school district in Westchester County, New York, paid for him to attend a private day school from the time he was in kindergarten until he turned 21 last year. McHale, who has autism and a developmental disability, said he felt displaced and abandoned when he was suddenly no longer able to see his classmates and teachers in person.

Instead of the daily therapy he was used to, McHale’s therapist called once a week and sometimes visited in person in the driveway. It helped, but it wasn’t the same, McHale said.

Over the years, school helped him become more social and learn how to cope when he felt angry. But without the hugs and other in-person support he was used to, McHale says he reverted to old behaviors.

“I was punching walls again,” he said. “I was not happy. Basically, my 21-year-old self was put back into a 5-year-old’s mindset.”

His mother, Francesca Hagadus-McHale, is among the parents in New York who are working with lawmakers to try to get services extended for students who either aged out last school year, like her son, or those who will age out this year. Though her state encouraged districts to extend those services, her district did not opt to do it.

If the legislation passes, Hagadus-McHale says she’d want to see her son get additional therapy and help planning for life after school. Hagadus-McHale made dozens of phone calls to help secure a part-time job at a local farm where her son feeds and cares for the animals, but she says more could have been done to help prepare him for the transition.

McHale says if he and other students could get back missed services, it would be “extremely helpful,” and he’s supportive of efforts to try to make that happen.

“It felt like I was in limbo,” McHale said. “I think getting back that time with your therapist, or just seeing them more, would help rekindle that bond that you had before it got stripped away.”

This article was originally posted on Thousands of students with disabilities are set to ‘age out’ of school. After a pandemic year, they may get more time to prepare for what’s next.