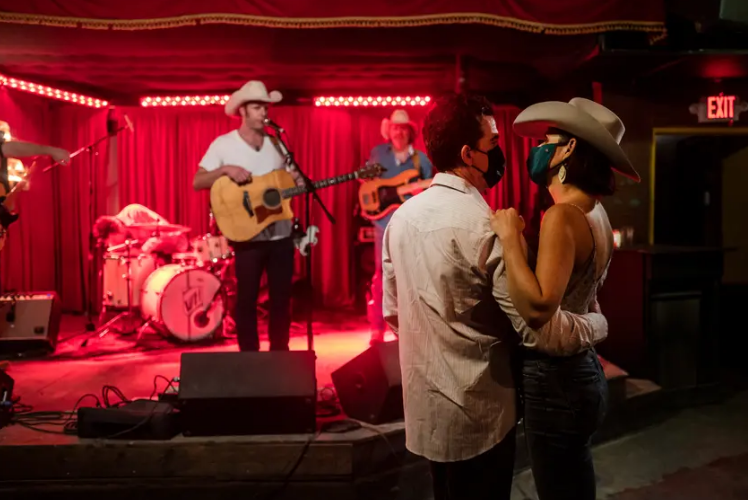 A few weeks after your second COVID-19 vaccination, you walk into your favorite restaurant for the first time in over a year, masked up and ready to enjoy being out. You sit down at a table, order your favorite dish and a beverage, and prepare to ditch your mask and return to something like normal.

But you can’t help but notice that some of the other patrons are walking in without masks, perhaps being seated by an uncomfortable but accommodating host, who’s appropriately masked. You can’t help but wonder: Are these folks vaccinated?

The April University of Texas/Texas Tribune Poll found Texas voters increasingly returning to normal lives after a year living under the tyranny of the coronavirus pandemic. Changes in Texans’ behaviors likely result from decreasing concerns about COVID-19, which has slowly subsided amid universal vaccine eligibility for adults and an increasing number of vaccinations.

But the increase in “normal” behavior has been most pronounced among those Texans who are hesitant or resistant to getting vaccinated, and those who say that they intend to get vaccinated but haven’t done so yet. That latter group has been shrinking with each passing month.

Thursday’s announcement from the U.S. Centers for Disease Control and Prevention that “anyone who is fully vaccinated can participate in indoor and outdoor activities — large or small — without wearing a mask or physical distancing” will result in many more people without masks in indoor public spaces.

According to one recent study by the Cleveland Clinic, unvaccinated adults are the most likely to be hospitalized due to COVID-19, making up 99.75% of patients. And even after the CDC announcement, some medical professionals were quick to remind anyone listening that people may have good reasons to continue wearing masks.

The partisan impulses cultivated and inflamed throughout the pandemic are starkly evident at this intersection of vaccine hesitancy and reported behavior. Vaccine-hesitant Republicans constitute a near-majority of all Texas voters living normally — 45%. Another 28% of Texans who say they are living normally are vaccinated Republicans — meaning nearly 3 in 4 voters “living normally” are Republicans, with more having failed to receive a vaccine than not.

This linkage between vaccine hesitance (or rejection) and COVID-flouting behavior is also evident in beliefs about the safety of social activities. Vaccine-hesitant Texans as a group are much more likely to consider social activities safer than those who have been, or plan to be, vaccinated.

Asked whether it would be safe to engage in each of 14 routine activities ranging from going to work, staying in a hotel and flying on an airplane, to attending an event at an indoor arena, going to a movie or eating at a restaurant, Texans who are hesitant to receive a vaccine found these activities safer, on average, than those who aren’t hesitant. Among those who expressed hesitancy, 72%, on average, rate each activity safe. Among Republicans who are hesitant, that average is 86%. By comparison, on average, only about half of vaccinated and vaccine-seeking Texans evaluated those public activities to be safe.

Those same vaccine-hesitant Texans are also more likely to be among those rejecting social distancing measures that kept the virus at bay prior to the distribution of the vaccines. Only 1 Texan in 5 now says that they’re not wearing a mask when they leave their home; 70% of this group is vaccine hesitant, with a majority, 53%, being hesitant Republicans. One in 4 Texans say that they are not avoiding large groups in public; 60% of those are vaccine hesitant.

So while vaccines are providing Texas, the country and the world with a patch of light at the end of a long, dark tunnel, it appears that our return to normal has — thus far — been driven in large part by what economists call free-riders, Texans who are benefiting from the distribution of vaccines to others, even if they are hesitant, or even unwilling, to get their shots.

Even as the CDC relaxes masking and social distancing guidance for public places, the attitudes of the vaccine hesitant, and the behaviors associated with them, pose a continuing public health threat even as overall concern about the pandemic recedes.

That ride isn’t so free after all.

This article was originally posted on Those Texans ignoring social distancing guidelines? They’re probably not vaccinated