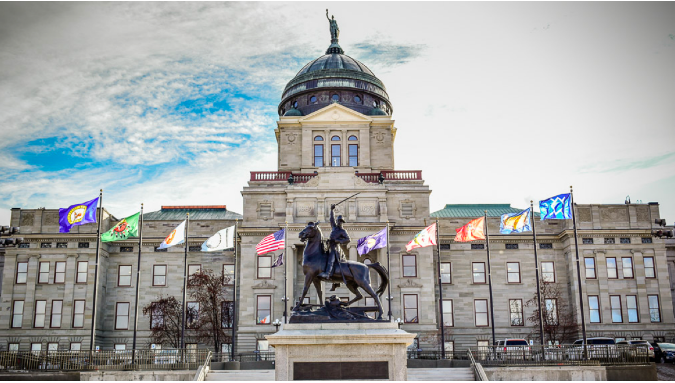 This week in Helena

With the March 3 transmittal deadline closing in on the Legislature, a raft of bills flooded committee agendas during the eighth week of the session. Some committees were slated to hear up to 20 bills per day, which led to many bills, particularly in the House Judiciary Committee, receiving swift hearings.

Rep. Derek Skees, R-Kalispell, introduced a bill to the House State Administration Committee that would eliminate the office of commissioner of political practices, the office that enforces the state’s campaign practice laws, and replace it with a four-person bipartisan council selected by legislative leadership. On Feb. 26, the committee voted to table House Bill 535.

Voting rights have been a source of intense debate in recent weeks, and a measure introduced by Rep. Sharon Stewart Peregoy, D-Crow Agency, seeks to protect voting rights on reservations by expanding access to ballot drop locations and allowing voters to use nontraditional addresses when registering to vote. House Bill 613 was heard in House State Administration Friday and has been reclassified as a fiscal bill to extend the amount of time legislators have to debate it.

Finally, a controversial bill to make Montana Supreme Court races partisan, sponsored by Rep. Scot Kerns, R-Great Falls, saw a flurry of action at the end of the week. House Bill 355 was heard by the House Judiciary Committee on Thursday and tabled that same day. But Friday the committee decided to untable the measure and narrowly voted to pass a heavily amended version. As it’s currently written, the measure would also allow political parties to contribute to campaigns for partisan judicial seats.

Four bills aimed at restricting the power of county health boards and limiting the governor’s power regarding emergency declarations were consolidated into two measures that passed out of the House Business and Labor Committee Thursday. House Bill 121, sponsored by Rep. David Bedey, R-Hamilton, would allow the governor or local officials to overturn recommendations issued by county health boards. It would also prevent local health boards from issuing directives restricting access to religious services.

House Bill 230, sponsored by Rep. Matt Regier, R-Kalispell, would create a law allowing the Legislature to weigh in on emergency declarations issued by the governor. It would require the approval of legislators if the order extends beyond 45 days and outlines a process for expedited voting on the matter.

Two bills that sought to facilitate the transfer of bison that exit Yellowstone National Park to tribal land were tabled in the House Agriculture Committee on Tuesday. Proponents said House Bill 311 and House Bill 312, brought by Rep. Marvin Weatherwax, D-Browning, would reduce the number of bison shipped to slaughter every year by expanding the capacity for brucellosis quarantine. Opponents expressed concerns about changing existing quarantine protocols due to potential impacts to the livestock industry.

That same day, Republicans on the House Agriculture Committee voted unanimously to pass House Bill 302 on to the full House. It requires county commissioners to sign off on any wild bison relocations within their jurisdiction.

Two proposals brought by Republican Thompson Falls Sen. Bob Brown that aim to reduce the state’s wolf population were heard in the Senate Fish and Game Committee this week. On Thursday the committee heard testimony on Senate Bill 314, which would remove individual tag limits for wolves in some parts of Montana and allow hunters to harvest wolves at night using lights, a practice known as spotlighting. Brown also introduced a measure that would allow hunters and trappers to be reimbursed for costs incurred while harvesting wolves. Opponents say Senate Bill 267 will make wolf derbies legal in the state.

Two Gianforte-backed tax measures cleared the Senate this week: Senate Bill 182, which would enact future tax cuts in the event of a budget surplus, and Senate Bill 184, which would exempt shareholders of Montana-grown businesses from paying capital gains taxes on stock options. Both measures now proceed to debate in the House.

A fifth tax measure backed by the governor, House Bill 303, would exempt more businesses from the state business equipment tax. It has already passed the House, and had its initial hearing in the Senate Thursday.

A tax measure Democrats had pitched as an alternative to Republican proposals was also voted down shortly after its initial hearing Tuesday. House Bill 424 would have added a high-earner income tax bracket and used the proceeds to expand Montana’s earned income tax credit. It was tabled on a party-line vote.

House Bill 427, which is a new iteration of House Bill 113, passed out of the House on Thursday. It’s more narrow than the previous version in that it specifically bans gender-affirming surgery for trans and nonbinary minors diagnosed with gender dysphoria. Rep. John Fuller’s earlier bill would have also banned other types of treatment, including puberty suppressants and hormone therapy.

House Bill 415, which would bar public institutions and private businesses from discriminating against people based on their vaccination status, drew significant interest, with more than 50 people testifying before the House Judiciary Committee on Tuesday. On Thursday it stalled in the House with a 50-50 vote.

Gov. Greg Gianforte signed off Thursday on the inflationary increase for Montana’s public education budget. House Bill 15, which passed both the House and Senate with strong bipartisan support, pushes much of the increase into the second year of the biennium due to the pressures of the pandemic. However, the bill’s sponsor, Rep. Fred Anderson, R-Great Falls, has stated that federal COVID-19 relief funds should help alleviate the financial situation for K-12 schools.

Shortly after the bill signing, Superintendent of Public Instruction Elsie Arntzen told Montana Free Press that the timing of HB 15’s passage was particularly important, as school districts are already crafting their budgets for the fall. HB 15 is a “promise,” she said, that the money will be there.

This article was originally posted on This week in Helena